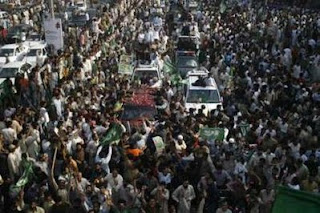 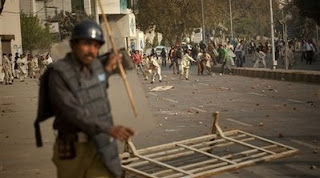 A friend from Lahore, Dr. Khalil Ahmad, of the Alternate Solutions Institute (Pakistan's first and possibly only free market think tank), posted that they are in the "midst of a revolution".

This afternoon, the demonstrations by lawyers and other activists turned violent, and scored have been wounded.

I told Khalil that it's "People Power" revolt. I just hope that it will not be as bloody like what happened in Tibet and Myanmar the past 2 years, where scored have been killed by the government soldiers.

In Philippines' People Power 1 and 2 in 1986 and 2001, respectively, there was regime change, the incumbent Presidents on those periods were toppled, no bloodshed. It's just that many participants in People Power 2, like myself, regretted we did it because we installed an equally corrupt but more politically-shrewed President.

This thing, I believe, though dangerous, must come and must happen, as part of Pakistan's political evolution. Despots must learn their lesson that the people cannot be oppressed for long without them asserting their civil and political rights.
Posted by Bienvenido Oplas Jr at 12:37 AM