On Feb. 5, I attended the lecture by Dr. Dennis S. Mapa, National Statistician and head of the Philippine Statistics Authority (PSA), and Professor at the UP School of Statistics (UPSS). His talk was “Poverty in the Philippines: Evidence from the 2018 Official Poverty Statistics,” sponsored by the Department of Economics of the Ateneo de Manila University. I was invited by Dr. Majah Ravago who used to teach at UP School of Economics (UPSE) and recently migrated to Ateneo.

The 2018 poverty data is significant because the Family Income and Expenditure Survey (FIES) 2018 on which it was based, has a huge sample size — 180,000 households, responding to a questionnaire of 81 pages long (50 on expenditures, 24 on income including entrepreneurial activities, and seven on sociodemographics), and the average interview time is four to six hours — Wow! FIES is done every three years. 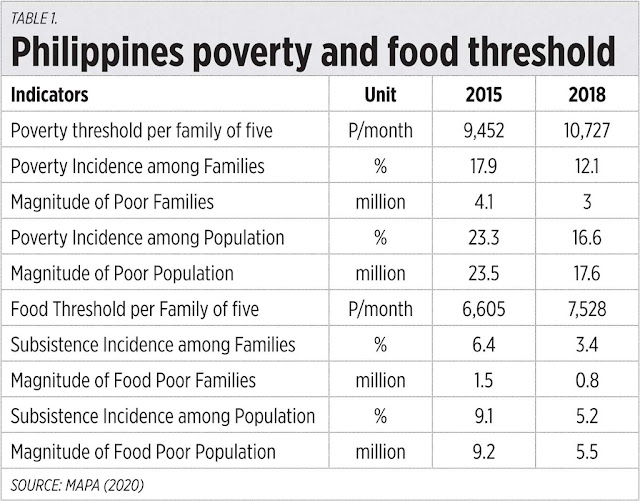 I have observed since many years ago that poverty incidence in the country has been declining and previous poverty data would be exaggerated. Before, the poor would ride bicycles or horses, now they ride motorcycles, e-bikes, second- or third-hand cars. Before, the poor used slow mail to communicate, now they use smart phones and communicate via Facebook, Instagram, e-mail, and SMS. Before, farmers used carabaos or hand tractors to plow their field, now they use or rent rotor tractors and harvester + thresher machines that significantly reduce the time and cost of harvesting their crops.

Credit goes to continuing market competition and technological innovation and modernization in cars and mobility, consumer electronics and agriculture machinery. The pessimists of “the poor getting poorer” just fan emotional slogans that are not based on hard facts on the ground.

After Dennis’ lecture, PSA and Ateneo signed a Memorandum of Agreement (MoA) that will allow the university’s faculty, staff, students, and researchers access to the public use files (or anonymized raw data) of the various census and surveys being undertaken by the PSA. I assume that University of the Philippines School of Economics (UPSE) and other colleges will have a similar privilege soon.

This week I saw the paper by Dr. Epictetus E. Patalinghug, “Too Much and Too Fast? A Look at the Philippines’ Infrastructure Build Up Program,” UP Professor Emeritus Research Paper July 2019. Dr. Patalinghug was my teacher at UPSE in early 1980s before he transferred to teaching at the neighbour building, the UP College of Business Administration. He was also among my wedding godfathers along with another former UPSE, Prof. Ruperto Alonzo (RIP).

Among the data he presented was about these huge build-build-build (BBB) projects of the Duterte administration and the promises of early completion that do not coincide with their delayed construction (see Table 2). 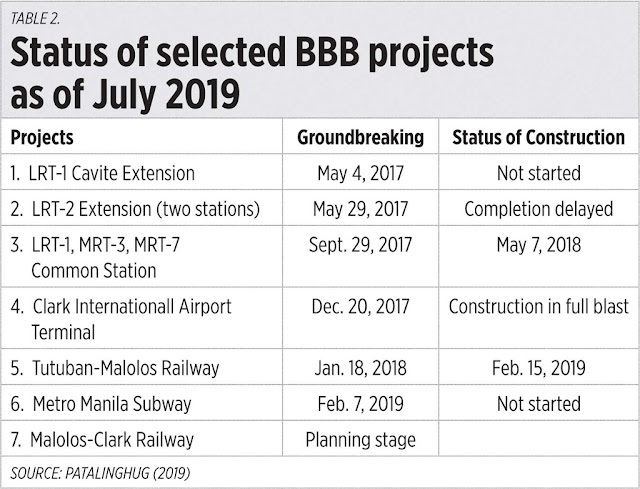 “… absorptive capacity constraints has created implementation bottlenecks in the BBB program and has reduced the success rate and impact of individual projects… Given the current pace of project implementation, most of the BBB projects will be completed beyond 2022. The next administration will experience several ribbon-cutting ceremonies, as much as the current administration has experienced several ribbon-cutting ceremonies on projects initiated by the previous administration.”

Recall also the paper by another former teacher of mine at UPSE, Dr. Emmanuel de Dios, published on Feb. 10 (see https://www.bworldonline.com/waste-and-means/) where he observed that “investment during the first half of Duterte’s term has been the least efficient in producing growth. The ICOR (incremental capital-output ratio) of 4.7 for 2017-2019 is the highest it has been over the past 15 years.”

A high ICOR means high waste in public investments. Like destroying not-so-ugly roads and building new roads on the same spot and flaunting this as BBB spending.

The administration’s BBB are mostly under “hybrid PPP” schemes and hence, would require lots of tax-tax-tax and borrow-borrow-borrow. Bad policy considering that the original integrated PPP scheme would optimize private investments’ construction plus O&M later, with no need for more taxes and borrowings.
----------------

Posted by Bienvenido Oplas Jr at 1:46 AM