Government says people should take buses, MRT, LRT and other public transportation to help reduce cars and traffic congestion on the roads, help "save the planet" with reduced fossil fuel use, etc. Then government makes it hard and inconvenient for commuters to reach the bus stops and terminals, LRT stops. That's why many people endure driving in high traffic to spare themselves from government-created inconvenience.

See this, from where I took this photo last Tuesday is the bus stop, and I walked from that far away Edsa-Shaw intersection, came from ShangriLa plaza, Mandaluyong. Government is often full of hot air and double talk. 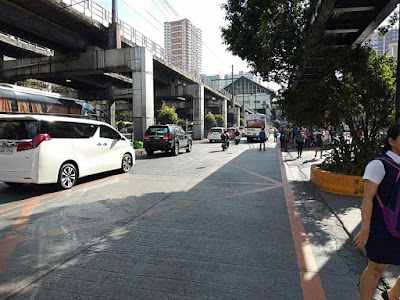 I talked to two #MMDA personnel, those two guys standing in EDSA in the photo above, why they make life difficult for commuters. Like typical government bureaucrats, they have one copy-paste answer: "Sa opisina namin kayo magsumbong o magreklamo, kami ay nagpapatupad lang ng order sa amin" (Send your complaints to our office, we only implement orders).

Consider if one is not feeling well, or carrying heavy stuff, or pregnant, or it's raining, etc., no excuses, these road bureaucrats say one must walk far away to get a bus ride. Cool.

Meanwhile in Makati, the City Hall personnel can quickly clamp or tow (about P1,500 fine) or penalize the motorcycle driver if they park in unauthorized areas. But city hall guys -- in charge of anti jaywalking in Buendia, front Axa bldg -- can park anywhere anytime. I took this photo last week. 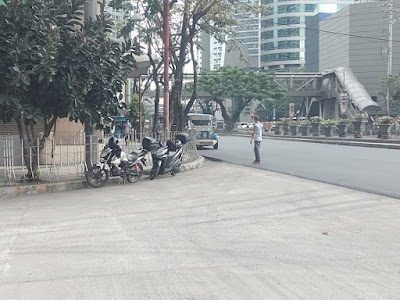 Comments from some friends of mine:

3. Ray: Noy the last time govt granted a single route franchise was 2012. Montalban Trinoma route. It has been18 years commuter have doubled. Plus brand new cars are offered at zero downpayment. Equals mega traffic. Govt should flood the country with transport franchise.
----------------