I think it is Uber HQ's decision in the US to pull out partially or fully (someday) from SE Asia. Why, perhaps they just want to get their money and put it elsewhere, maybe strengthen their US and Europe presence. It's their capital.

What should worry us is if government -- via the LTFRB, DOTR -- will bureaucratize a new PH tech company/ies that will rival Grab. Uber is US-based, Grab is SG-based. Perhaps it is time for a PH-based tech company to venture in this business. 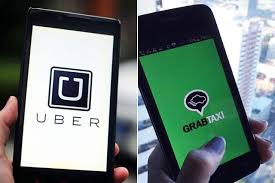 My advice to friends who use the "Duterte/LTFRB harassment of Uber then merger with Grab", maybe Yes but very likely No, so don't pursue it. I think this is a purely business decision by Uber HQ. The good thing is that Uber has inspired many local businesses here to copy their model, improve on it then dream big.

Capitalism always encourages innovation. The bigger innovation would be how to baffle the LTFRB bureaucrats here so that a tech company won't be harassed and treated as a regular taxi company.

Uber HQ by now may have realized that they did not factor in well how different the Asian transportation bureaucratics are compared to the US and Europe transpo bureaucrats. They may have to tweak their system then come back later.

Regular taxis are still the main competitor of Grab-Uber, so there is no monopoly. Taxis can also provide good service like cleaner cars and seats, more courteous drivers. But more than convenience, the main advantage of tech companies is transparency and hence, better safety. The passenger already knows the name and plate no. of the car that will pick him/her up, the same for the driver, he/she knows the name of passenger even before they meet. In contrast, taxis are known beforehand to LTFRB regulator-bureaucrats but not to the would-be passengers.

The market mechanism is for reposession of the collateral. If an investor in cars for use in an Uber business model signed a cross-collateralization agreement, deficiency remediation provision, or worst, personal guarantee, then it was their stupidity to have signed those legal remedies. Why should anyone bail them out? Under the reposession case, the price of used cars will come down which may lead to lower brand new car prices as well. The consumer wins.

THE LAND Transportation Franchising and Regulatory Board (LTFRB) is currently processing the applications of three transport network companies (TNCs), which are expected challenge the dominance of Grab Philippines…. Lag Go, Owto, and Hype.

If granted franchises, the vehicles of the accredited TNCs will be part of the common supply base of 65,000 transport network vehicle service (TNVS) in Metro Manila.

Indonesian ride-hailing and online payment company Go-Jek earlier said the company aimed to set up operations in the Philippines this year.

“With the increase of supply base under one app, you should see allocation times get better because the density of cars across the map gets better. So it’s easier to allocate. So if it’s easier to allocate, the surge would not be as frequent as before,” Grab Philippines country head Brian P. Cu said said in a press conference.