“You must be ready to give up even the most attractive ideas when experiment shows them to be wrong.” — Alessandro Volta (1745-1827, Italian scientist who invented one of the first electric batteries known as a voltaic pile)

This quote should be remembered by people who keep on insisting the urban legend that we can banish coal power in our lives soon, that wind, solar, and other intermittent renewables can provide 100% of our electricity needs. That is far out.

Despite the Renewable Energy (RE) law of 2008, despite the generous subsidy to RE companies via feed-in-tariff (FiT) — which provides subsidies for REs for 20 years — wind and solar can provide only 2% of the country’s energy needs as of 2017. Coal, for its part, provided one-half of our total national electricity needs (see table). 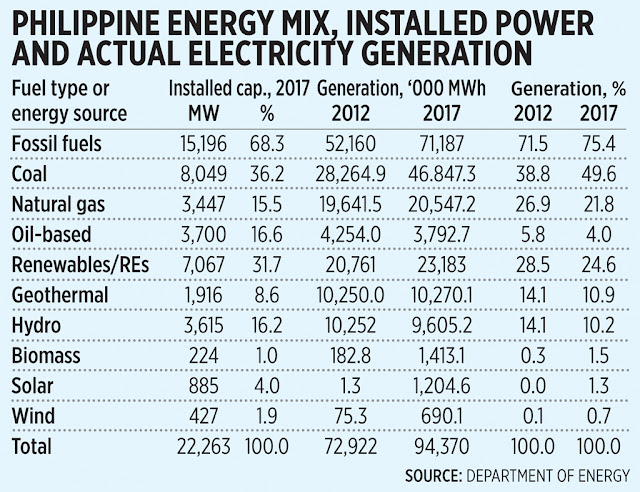 These numbers show that as of 2017, (a) coal installed capacity was only 36% of total but its actual power generation was almost 50% of total; (b) oil-based plants constituted 17% of installed capacity but generated only 4% of total because these oil plants are used mainly as peaking plants or they run only during peak demand hours to prevent blackouts.

And this brings us to four recent energy reports in BusinessWorld last week.

3. DoE may step in as licensing body for retail power suppliers (April 12).

Report #1 is about the Board of Investments (BoI)-approved eight solar projects worth P86B ($1.7B) to be rolled out from October. The largest is the Iba-Palauig 2 Solar Project, 140 MW worth P19B. Second largest are two projects in Cavite, 392 MW valued at P17.3B. That is a lot of money that asserts that solar can be a reliable source for the Philippines.

Report #3 is about the DoE studying the legality of being the issuer of licenses for retail electricity suppliers (RES), a function by the Energy Regulatory Commission (ERC) governing the implementation of retail competition and open access (RCOA).

RCOA is among the beautiful provisions of the EPIRA law of 2001 because it allows electricity consumers the option to choose their own power suppliers. But RCOA was issued an indefinite temporary restraining order (TRO) by the Supreme Court on Feb. 21, 2017.

Report #4 is about Aklan Electric Cooperative (AKELCO) seeking to recoup losses of about P17-M a month associated with the closure of Boracay for six months. It has a power purchase agreement (PPA) with four power generators for 42 MW and they are required to pay for them whether the power is used or not. So AKELCO will increase its rates by P1.62/kWh to the rest of Aklan electricity consumers.

Report #1 does not heed the advice of Alessandro Volta and actual data on Philippines power generation and hence, run the risk of bad investments in the future.

Report #2 and new policy will convert some of those new coal plants to become mid-merit instead of baseload. This policy reversal might sour future investments in reliable coal power.

Report #3 is positive, affirming consumers’ rights to choose their own energy mix. The DoE should ultimately shy away from announcing its preferred energy mix.

Report #4 shows that the arbitrary closure of Boracay is bad not only for businesses in the island but also for businesses and households in the entire Aklan province.

Government, both Malacañang and DoE, should learn more to respect consumer freedom.
--------------