Among the common strategies used by an oppressive policy or government is to subsume and disregard individual concerns and put the community and society on top of almost everything.

The Tax Reform for Acceleration and Inclusion (TRAIN) law has raised energy taxes, sugar taxes, and other taxes to “compensate” for the cut in personal income taxes. Household concerns about the acceleration of inflation were muted in the crafting of the law because of the supposed higher communal and societal interests such as Build, Build, Build and other welfare programs including free education, health care, irrigation, among others.

The premise is that the Build program is not possible without higher taxes, without new loans especially from China communist government, and that existing taxes and welfare programs are still insufficient. It is a flawed and lousy premise.

This is shown by the numbers in the graph which covers the four richest economies in North America and Europe and Asian economies. As of this writing, some countries have reported their March 2018 inflation rate and the rest have not. An average for the two or three months of 2018 is taken and compared with the numbers for December 2017 as base year (see table). 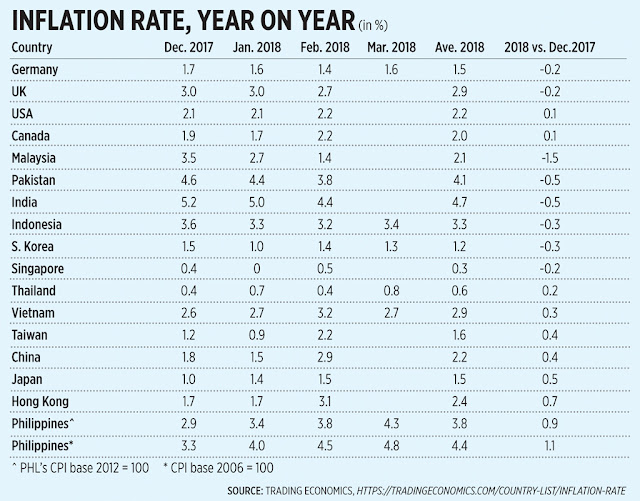 The Philippines is the outlier here, posting a higher inflation rate than the rest despite three things.

One, despite the fact that all countries were affected by higher world oil prices, some even experienced decline in consumer prices. West Texas Instrument (WTI) prices rose from $43/barrel in 2016 to $51/barrel in 2017 and $63/barrel average for January-February 2018.

Two, despite the fact that pass-on rates of higher oil taxes and other tax hikes have not been implemented yet. Fare hike petitions by jeepneys, UV express, buses, shipping companies, and airlines have not been acted upon.

There are two moves by government to control further damage wrought by its huge oil tax hikes. One is to not act or grant all fare hike petitions this year, forcing all public transportation companies (land, water, and air) to endure and absorb the high oil tax hikes.

Two, it can delay the approval of all fare hikes until late 2018, then allow the second round of the three-year oil and coal tax hikes by January 2019. It can also further delay second round of fare hike adjustments to late 2019.

Are these high oil tax increases of nearly P7/liter in three years, including higher coal, sugar, and other taxes really necessary to finance Build, Build, Build?

This was indirectly answered in the forum, “Financing Inclusive Infrastructure” by Stratbase-ADRi last week, April 5 at The Tower Club in Makati City. The main speaker was Dr. Alvin Ang of Ateneo Economics department.

More ODA obviously would mean more taxes to pay for big loans from foreign governments like China or from multilaterals like the World Bank and the Asian Development Bank. Alvin did not differentiate between integrated PPP (construction and O&M done by one entity) and hybrid PPP (construction and O&M done by two separate entities) but he was implying the latter. And he suggested that either way, ODA or PPP financing remain desirable and a lesser problem compared to execution problems like right of way, corruption in procurement, and budget bottlenecks.

As argued in previous papers in this column, the policy reversal of this administration from integrated PPP to hybrid PPP so that more loans particularly from China will be “needed” is wrong.

Many local private players can finance big infrastructure on their own and hence, will not need TRAIN tax hikes leading to higher inflation and more business uncertainties. These local players are more than willing to finance and operate big local infrastructure because they intend to become big PPP players in the region now, and the world someday.

The mistake of TRAIN 1 in high energy taxes can be corrected by the TRAIN 2 bill now in Congress. Like a significant tax cut in corporate income (from 30% to 15-20%) with few exemptions, and discontinuation of oil and coal tax hikes in 2019-2020.

Posted by Bienvenido Oplas Jr at 12:25 AM