There are two similarities between the mining industry and Boracay.

The first is that both have small contributions to GDP, and the second is that both can be closed by the Duterte government for six months without any compensation to affected enterprises including environment-compliant ones. Mining companies and Boracay establishments show the face of business uncertainties in the country.

Mining production is 0.6% of GDP while Boracay production of services is 0.1% of GDP, an amount that is “very insignificant” according to the National Economic and Development Authority (NEDA).

By extension, the six-month closure Boracay island will adversely affect only a few number of businesses and jobs. That’s a very flawed argument.

Meanwhile, last April 9, President Duterte told mining companies: “I’m going to give you six months from now. Six months. I do not want to see any bald [areas]. I want [to see] the trees as tall as me by six months. Without the replacement of those trees, consider your permit revoked. Better pack up your things. You can go and that would be closed permanently.”

In early 2017, the former DENR secretary who was rejected by the Commission on Appointment (CA) issued a ban on open pit mining. That ban has not been lifted until now even though the Mining Industry Coordinating Council (MICC) has already recommended ending the ban.

The continuing investment uncertainties in Philippine mining are partly discussed by the Fraser Institute’s “Survey of Mining Companies 2017” report. Fraser is a famous free market think tank in Canada while the survey is an annual study of mining and exploration companies around the world with the goal of assessing how mineral endowments and public policies like taxation and regulations affect exploration and extraction investment.

These 91 jurisdictions are: 13 states in the US, 12 states in Canada, 9 states in Argentina, 7 states in Australia; 15 countries each in Africa and Latin America/Caribbean, 12 countries in Europe, and 8 countries in Asia-Oceania.

These numbers show the investment attractiveness of the 91 places. The index is constructed by combining the Best Practices Mineral Potential index (which rates regions based on their geologic attractiveness) and the Policy Perception Index (which measures the effects of government policies like taxation and regulations on exploration investment (see table). 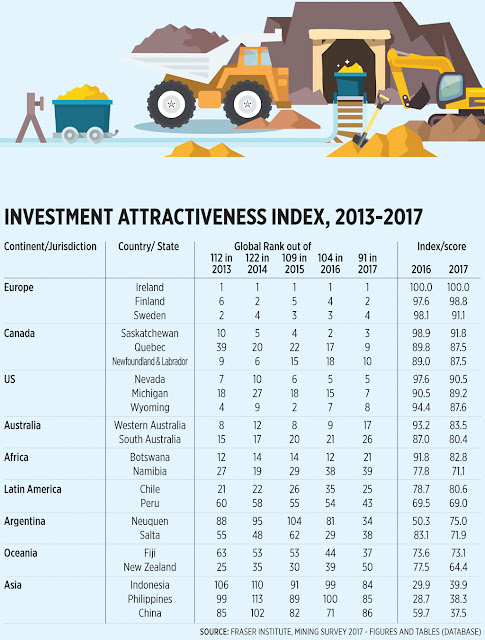 Fraser noted that “The 10 least attractive jurisdictions for investment based on the PPI rankings are (starting with the worst) Venezuela, Chubut, Zimbabwe, Guatemala, Democratic Republic of Congo (DRC), China, Philippines, Indonesia, Bolivia, and Ecuador.”

While rich countries in the world like Ireland, Finland, Sweden, Canada, USA, and Australia have business-friendly mining policies as indicated in the table, poorer countries like the Philippines have business-unfriendly policies in the sector. And this can be a good explanation among many other factors why many poor countries remain poor.

Nature has given the Philippines and other now poor countries good natural and mineral endowments. Their governments though have given these countries bad policies and extortionary regulations. All the fears of “mineral depletion,” “unmitigated surface soil destruction” and other concerns did not happen in these rich countries. Why?

The rule of law. Investments and environmental laws are strictly enforced and followed by all players, big and small, local and foreign.

It is not “nature preservation and environmental conservation” that determine sustainable mining and job creation. Rather, it is the rule of law. This is the essence of government raison d’etre or reason for existence.
------------------