Many people are enamored — and rightly so — with consumer electronics and gadgets like smartphones, iPads, laptops, and so on. Then, there is new and huge global demand for electric cars and bikes, even electric buses and trucks.

All these products and equipment need batteries, which, in turn, require large volumes of cobalt, considered by some analysts as the “new oil.”

This is good news for the Philippines.

First, cobalt prices seem to be skyrocketing. Second, the Philippines has the 4th largest cobalt reserves (#1 is Congo) and the projected reserves/production (R/P) ratio is 70, meaning at 2017 estimated production level, it will take 70 years for our cobalt reserves to be depleted.

Another good news for the Philippines is in nickel. First, world prices are also rising high though not as fast as cobalt prices. Second, we have the 5th largest nickel reserves (#1 is Australia) although our R/P ratio for nickel is only 21 years (see table). 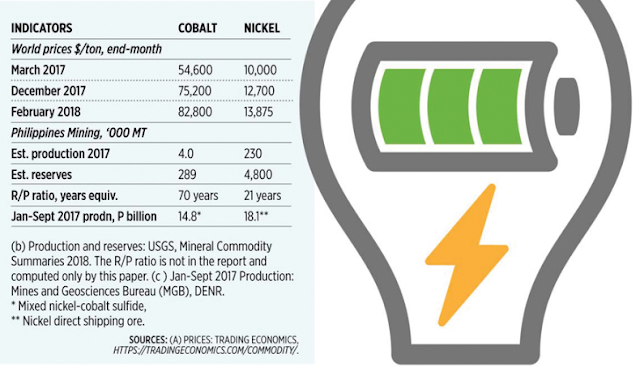 Why have cobalt prices risen too fast recently?

According to Darton Commodities projections as cited in a Bloomberg report, cobalt use in electric vehicles and other lithium-ion battery applications was around 55,000 tons in 2017 and this is projected to rise to around 160,000 tons in 2025 and 330,000 tons in 2030.

Mining exploration and drilling technology keeps improving so new reserves for cobalt, nickel, gold, copper, and other metals that the Philippines has will be discovered soon and this will raise the R/P ratio for these commodities.

During the BusinessWorld Stockmarket Roundtable last Feb. 20, at Shangri-La Hotel, about two or three of the four speakers that afternoon (Gus Cosio of First Metro, April Tan of COL Financial, Jun Calaycay of Philstocks Financial, and Mike Gerard Enriquez of Sunlife Financial) mentioned the short- and medium-term potentials of the Philippines mining sector. These finance guys see the trend in global commodity supply and demand and hence, their global prices.

Various uncertainties in the sector should be relaxed if not ended soon. The good potentials are there in terms of corporate income, jobs generation, mandatory community development projects, and government (national and local) tax and nontax revenues.

The recent Tax law RA 10963 known as Tax Reform for Acceleration and Inclusion (TRAIN) has, out of nowhere, raised the mining excise tax from 2% to 4%. It seems that this was not contained in the original House and Senate versions prior to the Bicameral Committee meetings but were just inserted along the way, along with the coal tax hike and tobacco tax hikes.

Now TRAIN 2 is in Congress and there are moves to further raise the mining excise tax on a per-commodity basis, but without reducing or removing other taxes, royalties and mandatory community expenditures.


There should be a limit to the politics of envy via high and rising taxation. When companies create lots of direct and indirect jobs, give lots of social and economic services to their personnel and community residents who are not even company employees, pay lots of taxes, regulatory fees and royalties to the government, the itch of tax-tax-tax should be tempered.
---------------