More countries are reporting their January 2018 inflation rate and it is becoming clearer that majority of them have reigned in the inflationary pressure of the big rise in world oil prices. West Texas Instrument (WTI) prices, for instance, rose from $43.2/barrel in 2016 to $50.9/barrel in 2017, and $63.7/barrel in January 2018. 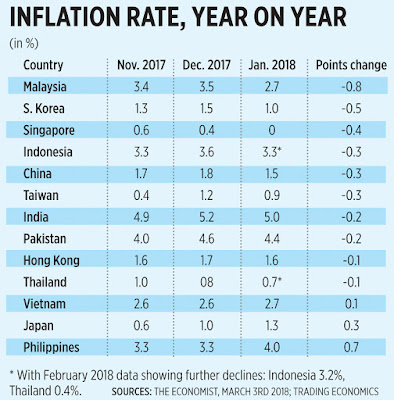 The big question is: Why is the Philippines the outlier in Asia in inflation rate movement?

The proximate reason is the recent tax law, RA 10963, known as the Tax Reform for Acceleration and Inclusion (TRAIN). The cut in personal income tax was good, but it was more than negated by the tax hike in oil and other commodities — coal, sugar beverage, etc. The anticipated pass-on effects of such tax hikes should be big.

How about Japan, which experienced a 0.3% point increase? There are two possible explanations.

One, it is experiencing a re-inflation trend after deflation in 2016 of -0.1%, then 0.5% in 2017. Two, it has a tax reform bill in 2018 that includes a 15% tax credit for corporations if their workers have higher pay of at least 3%, and if domestic investment in depreciable assets is equal to or more than 90% of depreciation. This means there will be expected higher household consumption due to higher salaries for workers and managers, and higher re-investments.

The effect of TRAIN on electricity prices would be felt in four avenues.

1. Oil tax hike (for peaking plants in WESM), about 1 centavo/kWh.

4. Rise in universal charge (a big hike in electricity cost for many islands and provinces running on gensets/oil, subsidy passed on nationwide), perhaps another 1 centavo/kWh.

Sources for the first three points are Meralco as reported in the papers.

Last January, the Department of Energy (DoE) directed all distribution utilities (DUs) to require their power suppliers, the generation companies (gencos) to explain any additional charges that will arise from TRAIN.

Then last February, the DoE suggested that gencos should absorb the initial cost of higher oil and coal taxes. Meaning there will be no pass-on to the consumers. This was never done before.

In addition, the DoE also mandated the oil companies extend subsidies to public utility vehicles (PUVs) as a “cost cushioning mechanism.” This is another no pass-on policy.

These are price control measures. These are ugly policies to make the ugly tax hikes under TRAIN appear “less ugly” and “non-inflationary.”

The architects and apologists of TRAIN are confused and are engaged in double-talk.

First, they make cheaper oil and coal become expensive, then deny the potential big inflationary pressure of such a measure.

Second, when inflationary pressure is higher than their projected and concocted figures, they blame speculators and not the law that created speculation.

Third, TRAIN exhibited favoritism and cronyism for renewable energies (REs) like wind-solar because their feed-in-tariff (FiT) revenues from WESM, then FiT-All, were again exempted from VAT. Natural gas is also fossil fuel but TRAIN did not slap it with excise tax, only oil and coal.

Fourth, TRAIN’s architects deny that additional revenues were largely meant to favor Chinese contractors and suppliers because many big projects that were already under the integrated PPP were reversed and put under “hybrid” PPP to be financed by ODA and foreign loans from China.

Fifth, they now propose price control measures in energy and other sectors to make TRAIN look “less ugly” and “non-inflationary.”

The Communist Party of China and Xi Jinping’s “thoughts on socialism” could be a rising influence in the economic and energy policies of the Philippines. This is wrong.

The Philippines should stay the course of more market reforms, not more state interventions and taxation. China’s communism and dictatorship is a lousy “model” that should never be entertained by the Philippines and other developing economies.