Part 1 of this short study was published in this column on Feb. 15. Some corrections and adjustments are made here because of (a) lower coal consumption for power generation, and (b) using an incremental increase in coal excise tax.

Meralco computation of oil cost for their captive customers based on November 2017 data was 0.6 centavos/kWh in 2018 when oil tax is only P2.50/liter. There are no projections for 2019-2020 so I estimated the numbers for these years using the respective oil tax rates of P4.50 then P6/liter.

Before, VAT on transmission charge was minimal, it applied only on ancillary service. With TRAIN, the VAT is applied on other transmission costs (power delivery, system operator, metering, etc.).

Hike in universal charge is not included here but this might be minimal. Many island provinces and remote islands of big provinces get electricity from gensets running on diesel. The generation cost is naturally high, from P10-20/kwh but residents there are not charged that full amount, a big portion is subsidized and passed on to all other consumers nationwide via the universal charge.

Last month, the Energy Policy Development Program (EPDP) published a new study, “Electricity prices and TRAIN” by Dr. Ramon L. Clarete. It is a neat study because it considered variations in heat content per coal type (Yes, not all coal are the same, the same way that not all dogs are the same). For brevity purposes, I added only a portion of his table 5 which summarize the projected hikes in electricity prices because of TRAIN (see table). 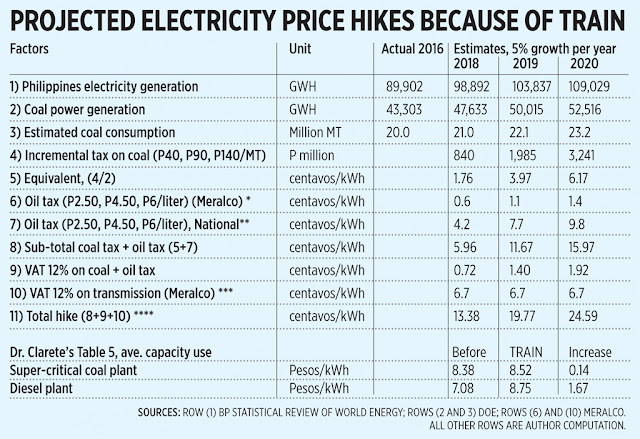 The estimates by Dr. Clarete are much higher. By 2020, 14 centavos/kWh for coal plants and P1.67/kWh for diesel plants. VAT on these hikes are not included yet, and VAT on transmission charge also not included.

So with 2018 prices about 50% higher than 2016 prices, the projected rise in electricity price from coal plants would be higher than his estimated 14 centavos/kWh, perhaps could go up to 18 centavos or higher.

These costs are for direct household electricity consumption alone. Not included are pass-on rates in the form of higher prices by factories, schools and universities, shops and malls, hotels and restaurants, hospitals and airports, etc. These enterprises consume tens of thousands of kWh per month, the additional electricity cost will be passed on the consumers, which might affect sales and hence, affect future salaries and benefits of workers.

The tax hike for coal and oil products is among the worst mistakes of TRAIN law. Retaining the high 12% VAT is another. Government has no justification in making cheaper energy become expensive. We hope that these mistakes will be recognized soon so that succeeding TRAIN 2, TRAIN 3, etc. will either reverse them, or at least not make them even worse.
---------------