BWorld 199, Charity and giving should not be legislated

“How selfish soever man may be supposed, there are evidently some principles in his nature, which interest him in the fortune of others, and render their happiness necessary to him, though he derives nothing from it, except the pleasure of seeing it.”

Among a plethora of so many global comparative indices — competitiveness index, economic freedom index, corruption index, energy security index, happiness index and so on — there is an interesting one called the World Giving Index (WGI).

It is produced by the Charities Aid Foundation (CAF), a UK-based international NGO. WGI 2017 is based on data from Gallup’s World View World Poll research project covering 139 countries in 2016. Some 1,000 questionnaires are completed by a representative sample of individuals living across a country. Bigger countries have bigger samples collected, like 4,373 interviews in China.

Overall, more than 146,000 people were interviewed by Gallup in 2016 and samples are probability-based. Surveys are carried out by telephone or face-to-face depending on the country’s telephone coverage (see table). 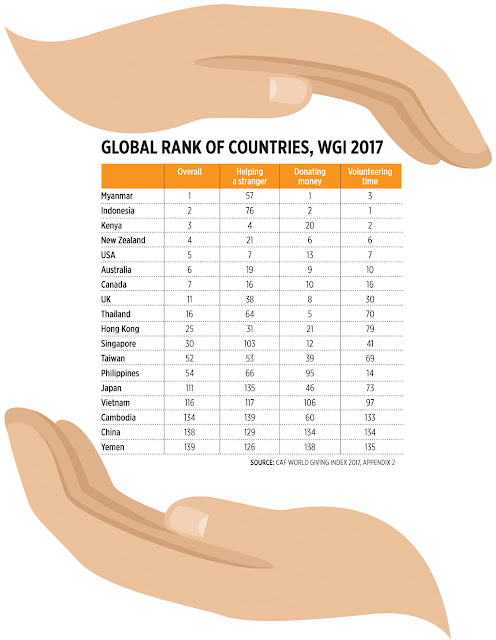 The result seems plausible except that Japan’s ranking only 111th out of 139 countries might raise one’s eyebrows in disbelief. Japan’s prosperity is largely a result of its being a trustworthy nation and hence, giving-oriented. One can put big investments in time and money on something and trust that no one will confiscate, steal, or destroy that investments. Gallup and CAF may have to revisit their questionnaires or the individuals they have asked.

Nonetheless, it is worth noting that the top two world rank were secured by ASEAN countries Myanmar and Indonesia. The Philippines is 54th or within the upper half. Communist China is 2nd to the last, one notch before Yemen.

Now there is a bill in Congress known as the “Food Waste Reduction Act.” It is a lousy bill because (1) it does not believe that Filipinos have capacity for voluntary donation and thus, it wants to “make it mandatory to donate edible food surplus for charitable purposes.” And (2) it does not believe that there are already existing processes and organizations, global-regional-national, that accept and distribute food donations by companies and individuals.

One such global and regional organization is “Second Harvest Asia” also known as Food Banking in Asia. Its regional head is Charles McJilton and its Philippine representative is Bruce Hall, an American married to a Filipina academic and mainly residing in Iloilo City for two decades now.

Charles emphasized that “Companies / people donate because they trust their food will go to those in need and that they will not be harmed. Trust is a key factor. Mandating donations will not create the necessary trust that must be present.”

This bill may sound good to some but hidden in it are huge interventionist policies. It intends to cover nationwide all food manufacturers; all food establishments (restaurants, cafes, diners, fast food chains or hotels); all supermarkets with at least 500 square meters of selling space; and all culinary schools which offer culinary, baking, and pastry courses with at least 50 students.

The monitoring and inspecting agencies will be the Department of Social Welfare and Development (DSWD) in coordination with the Local Government Units (LGUs). Can one imagine the opportunities for abuse and extortion by some personnel of these agencies?

Among the troublesome provisions of the bill is “Section 9. Food related Business Waste Reduction Strategy — The owners of food-related businesses such as food manufacturers, supermarkets, restaurants, cafeterias, culinary schools and hotels are hereby required to: (a) Submit its report to DSWD and DENR containing data on the amount (in tons) of its edible and inedible food surplus, organized according to the manner of disposal, including donation, composting or discarding; (b) Enter into a contract with food banks to redistribute edible food surplus to the food insecure…”

In reaction to this, Charles asked several questions:

3. Entering into a contract does not mean the food bank can take all that is being offered or has the resources to pick up the food donations.”

Government and legislators should stay away from mandating and penalizing individuals’ and private enterprises’ voluntary giving. Government should focus its resources and manpower catching real criminals — thieves, murderers, rapists, kidnappers, land-grabbers, arsonists, terrorists, plunderers, protectors of criminals, both outside and within government itself.
-------------