IPR and Innovation 42, Coalition letter to WHO re plain packaging

Today, a global coalition of 62 market-oriented independent or non-government think tanks and institutes sent a letter to the WHO. Three institutes from ASEAN countries were among the signatories -- CIPS in Indonesia, IDEAS in Malaysia, and MGT in the Philippines. 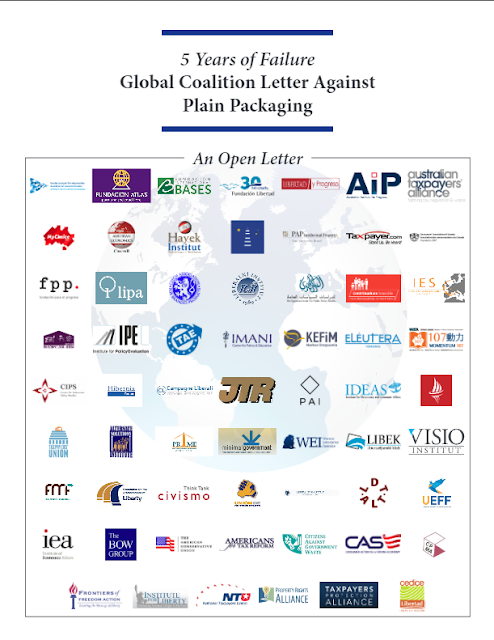 December 01, 2017, marked the five-year anniversary of the full implementation of plain packaging in Australia. The removal of brands and trademarks from packaging remains a gross violation of intellectual property rights and has failed to achieve its intended goal. As a global coalition of sixty-two think tanks, advocacy groups and civil-society organizations that have been critical of plain packaging for any product, we write in response to proposed plain packaging tobacco control measures and to the announcements by several countries of their interest in pursuing these policies.

Intellectual property rights are human rights enshrined in the Universal Declaration of Human Rights: Article 17, the right to ownership; Article 19, the right to freedom of expression; and Article 27, the right to protection of material interests. In this regard, even if plain packaging is effective, it should still be repealed, as rights are inalienable and should not be discarded for political purposes.


International trade law, the UNDHR, and historic international treaties are designed to protect intellectual property for this very purpose. The innovation incentive created by trademarks fuels competition and produces amazing products demanded by consumers like affordable medical advances that save lives. Obviously, any loophole should be closed, not exploited....

After Australia implemented the policy, other industries have been targeted around the world: alcohol, sugary beverages, fatty foods, even toys. These industries employ millions and any regulation that would deny key IP assets would have a devastating global economic impact. The trademark value alone of only twelve companies associated with these sectors is estimated to be more than $1.8 trillion.

The costs of plain packaging are enormous: the loss of the innovation incentive to the economy and society are inestimable, the mutilation of established international IP law is unprecedented, and the market carve-out to illicit actors, including terrorists, is reprehensible. It is beyond reason that such a policy continues to be pursued, even after it has failed to achieve its intended goal.

We urge the WHO and governments around the world to stop infringing on intellectual property rights with plain packaging policies.