NEDA secretary Ernesto Pernia admits China's interest rate of 3% is much higher than Japan's 0.25%-0.75%, in talk in front of businessmen and economists this afternoon.

Asked why the government is availing more of China's expensive loans than Japan's cheaper offer Pernia could only reply "Because we need more friends". #IdolNiDuterte #ChinaPuppet 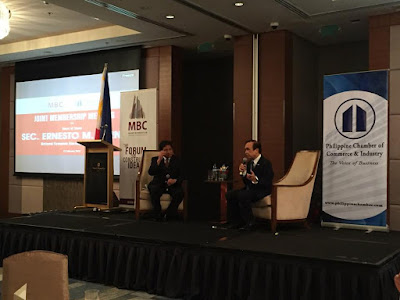 Ok, PH taxpayers are "less friends" of the Duterte administration that is why we must pay more taxes via TRAIN and they will give more money to their "more friends" China Communist Party. Magaleeeng.

To the Dutertenomists and TRAIN rah-rah boys and girls -- eto abangan nyo: the main purpose of "more revenues via TRAIN" is not exactly more infra but more payment for China loans. We have NLEX, SCTEX, TPLEX, SLEX, STAR, CAVITEX, NAIAEX, Skyways, etc even without big tax hikes. Lots of "hybrid PPP" were actually integrated PPP before President Duterte came to power.

Integrated PPP means no need for new ODA, new loans from China or elsewhere, no need for tax-tax-tax because the private builders of those big infra have the financial, technical and engineering resources, network to build those behemoth structures at minimal cost to taxpayers (only right of way cost, etc). Hybrid PPP means more loans, especially from the China communist party.

Recall also that when Ernesto Pernia was newly appointed as NEDA chief, he justified the series of drugs murders as "necessary evil."

@Noysky
Replying to @bendeveraINQ @SecPernia @InquirerBiz
Wow, tax-tax-tax de TRAIN so that PH govt can pay these big loans fr China? Horrible. These shd be integrated PPPs and not charged to taxpayers.

Gus Cosio @gus_cosio
Replying to @ClaireJiao @Noysky @cnnphilippines
Japan offers better quality performance at cheaper cost. Why in heaven’s name will you burden us with this preposterous idea?

@bendeveraINQ
@SecPernia: But the Japanese had been slow in process of financing projects, while the Chinese has become more aggresive @InquirerBiz

@bendeveraINQ
@SecPernia: Chinese loans, at best, slapped 2-3% interest per annum vs. Japan soft loans/ODA at 0.25-0.75%, but we haven’t signed loan agreements with China yet DD-biz-INQUIRES_

"Under the previous administration, the P18.72-billion Kaliwa dam had two pre-qualified bidders, which are now out of the picture... It used to be a public-private partnership, with MWSS as implementing agency.

Since the project is funded by ODA from China, Mr. Velasco said there will be no pre-qualification stage since the Chinese embassy identifies the three pre-qualified companies."

Another big China loan, contractors and suppliers identified by China embassy, very likely cronies of the China Communist Party. PH goverment agencies will wait for the terms and say "Yes", and PH taxpayers will pay for the bill, courtesy of TRAIN de tax-tax-tax.

"ON CHINA'S HEGEMONIC ACTIONS AGAINST THE PHILIPPINES
A few weeks ago, an EU ambassador posted in Sri Lanka repeated to me what a Chinese diplomat told him: 'No big deal. The Philippines is not even a real country.' Nasaktan talaga ako."

"Nonoy Oplas got it all wrong — making a comment without even knowing the context. Rather unscholarly and malicious!"

Ok Sir Ernie, what is the non-malicious explanation why (a) PH government should get new foreign loans when many projects were already under integrated PPP (not "hybrid" that require new loans, or new public spending and hence, new taxes), and (b) why China loans considering that China interest rates are high, and China Communist Party is a theft of PH territory?

I will apologize for my statements above if these can be clarified. Thank you."


As I expected, no further reply or clarification.
Posted by Bienvenido Oplas Jr at 10:18 PM