Another #EarthHour today, an annual global campaign by the WWF. Darkness is either good or bad. If good, then people should do it nightly or many hours a night like North Korea, not just 1 hour/year. And #fossilfuel is either good or bad. If bad, then people should stay off-grid because the grid transmits and distributes 50% of all PH electricity coming from coal power, another 20% coming from oil and natural gas, both fossil fuels. One cannot say "Fossil fuel is bad but I'll keep using it anyway". That hypocrisy and double talk is like saying that "Corruption and stealing is bad but I'll keep doing it anyway." #CCC, #WWF, #AlGore, #UN, #DENR, #Greenpeace.

And WWF, GPeace, many other environmental activist groups are also campaigners of "climate justice" movement. They demand "system change" -- referring to change from capitalist system to socialist or communist system. Cool. 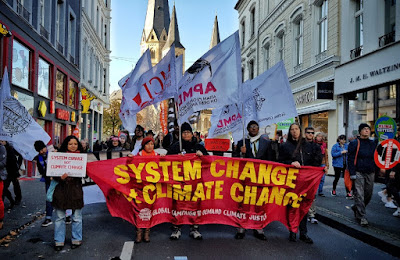 For them, there is little or no such thing as "nature-made" warming/CC. They deny that CC is natural; deny that CC is cyclical; deny that global cooling can happen after global warming; deny that the Sun, galactic cosmic rays, clouds and water vapor, ocean oscillation, other natural factors are big drivers of climate; deny that CO2 is a useful and non-pollutant gas. They are the big deniers then turn their fingers around so that large-scale climate robbery and trillions of $ scam will continue.
--------------