Energy 107, Avoiding brownouts due to gensets, not solar battery

This story contains half-truths and hence, can be considered as fake news. 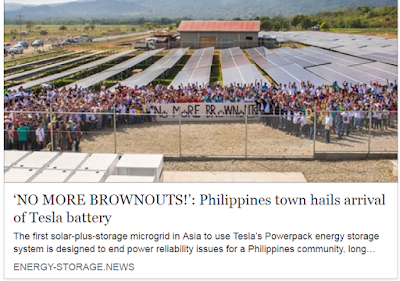 (1) “Leviste to bring cheaper, more reliable power to areas poorly served by utilities”
à Solar + battery will never be cheap in the short-term. Long term perhaps. I think Leviste’s current cost of solar + battery is at least P5.90/kWh (higher than P4/kWh for coal, natgas, others) and it cannot produce electricity 24 hours straight especially when it is cloudy and raining for many hours during daytime.

(2) “project utilising 2MW of PV panels… 2MWh of Tesla's Powerpack battery… and 2MW of diesel backup.”
à Imagine that?  solar PV + Tesla battery + diesel genset, that cannot be cheap. With higher diesel prices because of TRAIN, gensets would cost at least P10-15/kWh. They will need the genset to run every night, 365 nights a year because there are days and weeks where the Sun doesn’t shine (monsoon season, 1-2 weeks, sometimes 3 weeks, of rains and thick clouds non-stop).

(3) “supply reliable power 24 hours a day, over the entire year, at 50% less than the full cost of the local electric supply”
à Partly true because islands that run on power barges and huge gensets and hence, run on 100% oil really have high electricity cost, between P10-25/kWh depending on the remoteness of the island. But they are not mentioning this comparison.

(4) “This includes a 5,000MW proposal to replace all planned coal plants with solar-plus-storage.”
à Outright disinformation and dishonesty. To have 1MW of installed solar PV will need about 1.2 to 1.5 hectare of land. So if one targets 5,000 MW installed solar, one will need 6,000 to 7,500 hectares of land, zero crops, zero tree because solar hates shade from any tree. And with only about 18% capacity factor (36% day time, zero at night), a 5,000 MW solar plant can actually produce only 900 MW on average, not 5,000 MW.

(5) “Mindoro, while particularly badly affected, is by far the only part of the Philippines where brownouts impair productivity and quality of life.”
à Wrong. Many islands and provinces still have regular “Earth Hours” until now. Palawan, Masbate, Romblon, Marinduque, etc.

Mindoro island, composed of two provinces Mindoro Or. and Occ. is growing very fast because of the RORO system where hundreds (or thousand plus?) of cars, motorcycles, buses and trucks traverse daily from Manila/Batangas to Panay island (4 provinces of Aklan, Antique, Capiz, Iloilo) and vice versa. A number of big tourism areas like Puerto Galera, Abra de Ilog. Mindoro does not have its own power plant. It is time that it must have its own, at least a medium-size 100 MW coal or hydro plant.

A more appropriate title would be "No more brownouts! Philippines town hails arrival of diesel genset."

A genset will give electricity 24/7 even if the Sun does not shine for weeks due to monsoon rains and daily thick clouds. Just put diesel continuously and have regular maintenance. The cost though will be 3x to 5x or more than that of a coal plant or hydro plant. Mindoro has lots of rivers because the island has plenty of big and tall mountains. Big and small hydro, run-of-river hydro should be feasible in some areas.
--------------

Posted by Bienvenido Oplas Jr at 12:28 AM