“Government does not tax to get the money it needs; government always finds a need for the money it gets.”
— Ronald Reagan, former US president

Under the Mining act of 1995 (RA 7942), mining firms pay, among others, an excise tax 2% of sales. For many years and decades, this has been deemed “too low” despite the presence of many other taxes, fees, royalties, mandatory contributions, obligatory community expenditures.

So under the new law Tax Reform for Acceleration and Inclusion (TRAIN), RA 10963, the mining excise tax has been raised from 2% to 4%. And this was a belated insertion because this idea was not present in both House and Senate bills before the Bicameral Committee meetings.

Now there is TRAIN 2 bill in Congress and the Department of Finance (DoF) has voiced out that it wants all tax reforms ratified by December 2018. The DoF wants a “comprehensive mining tax that will give the government a bigger share of miners’ revenues.” Translation: another round of mining tax hikes.

Philippine mining taxation is not exactly modest or low. Globally, it is somehow midway based on taxes, fees and royalties paid to the government, national and local. Or high if mandatory and obligatory expenditures for communities are included, like the Social Development Management Program (SDMP) that amounts to hundreds of million pesos yearly.

One international non-governmental organization, the Natural Resource Governance Institute (NRGI), produces an annual report called the Resource Governance Index (RGI) that measures how good or bad the governance of extractive industries are — oil, gas and mining (metallic and nonmetallic). The index is constructed using a framework of 149 critical questions answered by 150 researchers, drawing upon almost 10,000 supporting documents. Scores are on a scale of zero to 100 at each level of the index.

The RGI is composed of three components and several sub-components: 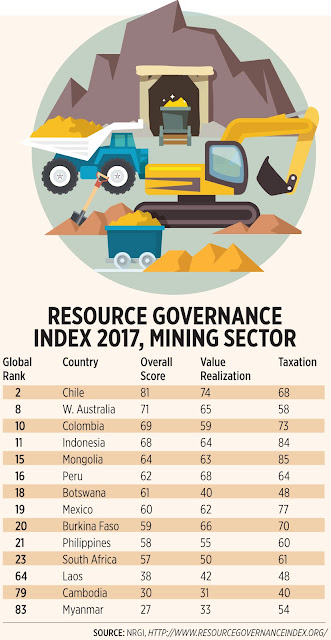 The RGI 2017 report was released last year covering 89 country-level assessments (in eight countries, both oil-gas and mining sectors were assessed). In the table below, I did not include countries in the oil-gas sectors, also low-score African, S. American countries after S. Africa, but I included low-score ASEAN countries to have a regional overview (see table).

So in the overall score, the Philippines ranked 21st out of 89 country-assessments, it belonged to the top, which is good. In the component Value Realization, it scored a midway 55 and in sub-component taxation, it scored high at 60. Which means that the statement “Philippines mining taxation is low” is not correct.

In that report, I was surprised to see that there is a government-owned Philippine Mining Development Corporation (PMDC). It is not involved in actual mining exploration and extraction though, perhaps one of those white elephants among the remaining government-owned and controlled corporations (GOCCs).

Aside from TRAIN’s tax-tax-tax in the sector, there are other proposals that seem idiotic and too interventionist. Like a bill in Congress, HB 5674, requiring a legislative franchise as prerequisite to the issuance of a Mineral Agreement or Financial and Technical Assistance Agreement (FTAA) for any mining project in the Philippines. Why bring in the legislators and politicians on top of national and local bureaucracies inspecting and investigating companies even before they can do mining exploration and extraction?

Then there are other bills declaring this and that province to be a “mining free zone and providing penalties therefor.” Example: HB 6727 for Nueva Vizcaya. Not all provinces have big mining potential and even in provinces which have such potential, not the entire province is resource-endowed.

Mining is either good or bad. If it is bad, people should stay away from using materials that use mining products so that they can reduce or avoid creating new demands for mining. Like cars, TV, mobile phones, computers, watches, electrical wires and cables.

If mining is good, then get the good practices in other countries and have them applied here. But blanket prohibitions like “no open-pit mining,” “no mining in this province,” “over-tax mining” should be avoided because they are based on emotions, not reason and economics.

Government should prioritize reason and economics in its legislation and implementation. Create values and consumer products from nature, create lots of jobs for the people, generate taxes for its social-economic programs.
------------