“It is hard to imagine a more stupid or more dangerous way of making decisions than by putting those decisions in the hands of people who pay no price for being wrong.”

There are many legislative and executive proposals now that are meant to protect workers but have the long-term effect of discouraging the hiring of more workers. These five measures seem to stand out.

1. MORE HOLIDAYS WITH PAY
Currently there are 15 national non-working holidays with pay. Then there are city/municipal non-working holidays proclaimed by local governments. Plus paid leaves provided for by special laws like solo parent leave and maternity leave. Plus work suspension with pay during strong typhoons, floods, and other calamities. Plus work suspensions due to politics like nationwide jeepney strikes.

Now there are legislative proposals to create new holidays with pay. Among these are: the last Monday of January as National Bible Day; and, July 27 as Iglesia ni Cristo anniversary day.

2. PAID MATERNITY LEAVE FROM 60 TO 120 DAYS
A bill called the “Expanded Maternity Leave Law” proposes to raise the maternity leave period to 120 days or four months. This will cover all female workers regardless of civil status or legitimacy of the child. Solo parents would be granted a total of 150 days maternity leave with pay. Fathers will also enjoy a 30-day leave with pay versus the current seven days of paid leave as provided for under RA 7322. Penalties for violations are high — fines up to P20,000, imprisonment for six to 12 years, or both.

3. SECURITY OF TENURE, ENDING ENDO
This is removing the employers’ and contractors’ flexibility to hire workers when demand for work is high. Like catering and malls, demand for business and labor is high during November and December due to the Christmas holidays and reunions, then tapers off by January.

4. EVER-RISING MANDATORY MINIMUM WAGE
Even the unskilled should be paid the mandated minimum wage. The danger of this policy is that the less-skilled or skilled but less industrious workers will not be hired, raising the unemployment situation in the country.

5. EXPANDED MATERNAL AND CHILD HEALTH CARE PROGRAMS
Also known as the “Healthy and Bulilit Act” bill, it seeks to expand the health programs during the child’s first 1,000 days of life. It would also strengthen the implementation of RA 10028 or the “Expanded Breastfeeding Promotion Act of 2009.”

These populist and welfarist proposals are based on the premise that: our employment rate is high and workers can easily find other jobs, and the health of Filipino mothers and workers are deteriorating. Both are wrong. Our unemployment rate is the highest in the ASEAN, and Filipinos’ maternal mortality is decreasing although not as low as that of Singapore and Brunei (see table). 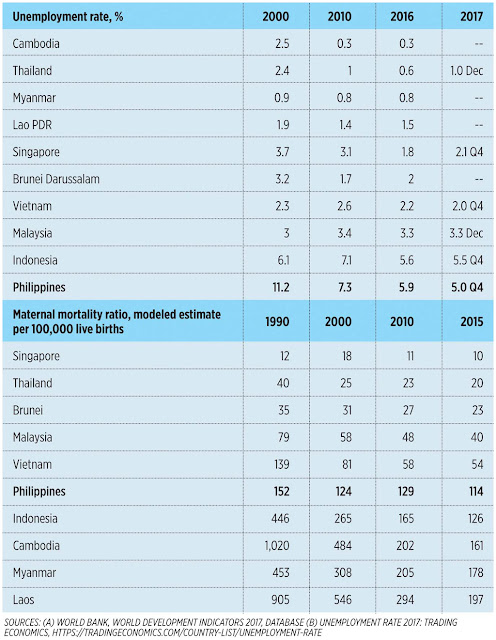 The danger of these proposals is that they make the hiring of workers, especially female workers and managers, become more expensive. If this trend continues, less workers will be hired — only the very talented, very efficient ones will be hired and the rest will be working in the informal, less well-paid sector or will be begging for more subsidies and cash transfers from the government.

And more workers doing repetitive jobs will be replaced by machines, robots, and artificial intelligence (AI). Machines do not ask for holidays with pay or maternity/paternity leaves with pay, and consumers want cheaper goods and services from shops and manufacturing plants.

Employment is a private contract between employers and would-be employees. If the terms are bad for job seekers, they should have more options for other employers. Better yet, employ themselves via micro-entrepreneurship or small start-up businesses.

Government should step back from setting and dictating the terms of employment and focus on enforcement of contracts. Government should also de-bureaucratize business and entrepreneurship so that more workers can migrate to become employers someday more easily.
----------------

Posted by Bienvenido Oplas Jr at 1:00 AM