Tyler Durden wrote, "the country's latest CPI print showed that the economy was overheating - which would force the central bank to hike rates, something it has long resisted - the country had a radical solution: change how CPI is calculated."

This is abnormal, of course. Iwas-pusoy sila DOF-DBM-NEDA Dutertenomists. When they were peddling the TRAIN bill, they promised that it won't be inflationary, just mild uptick in prices. When TRAIN became a law, they realize that they could not hide the high inflation impact of their tax architecture, they were proven to be wrong, at worst dishonest. Hence, finding other ways to make the ugly and inflationary TRAIN to become "less ugly" and "less inflationary." 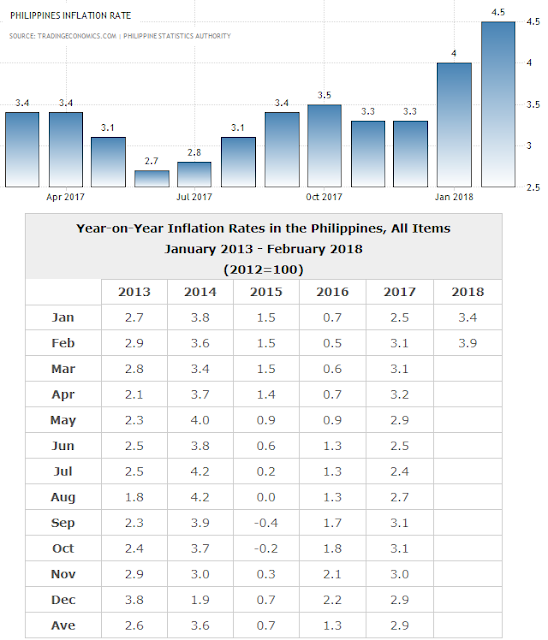 Starting March 2018, the PSA will release the rebased CPI series as announced in the press release number 2018-031 dated 22 February 2018. Data users can expect two sets of the CPI as the new series shall be issued simultaneously with the 2006-based series until June 2018. The CPI series for July 2018 onwards shall be 2012-based.
YEAR-ON-YEAR
http://www.psa.gov.ph/statistics/survey/price/summary-inflation-report-consumer-price-index-2012100-february-2018

Posted by Bienvenido Oplas Jr at 12:31 AM