“When a new source of taxation is found it never means, in practice, that the old source is abandoned. It merely means that the politicians have two ways of milking the taxpayer where they had one before.”
— H. L. Mencken, American journalist, satirist

As the public still has to adjust to the inflationary pressures of the new law called Tax Reform for Acceleration and Inclusion — Package 1 (TRAIN 1), TRAIN 2 is already in Congress. Among the targets are further tax hikes in “sin” products, and some NGOs that speak, write, and argue like government have been calling to further raise alcohol and tobacco taxes.
Such calls are based on certain premises and hypothesis like: (1) Philippines tobacco and alcohol consumption per capita is among the highest in Asia and the world; and, (2) the overall health of Filipinos is stagnating if not deteriorating because of high alcohol and tobacco use. Thus, consumption of sin product must be discouraged further via higher taxes plus other measures like graphic warnings.

How true are such premises and hence, how valid is the more-taxes-please measure as the purported solution?

The good news is that some basic data — like smoking incidence — are available and can be found at Our World in Data, a project of the University of Oxford. The bad news is that the data does not seem to support or corroborate those two premises and hypothesis (see table). 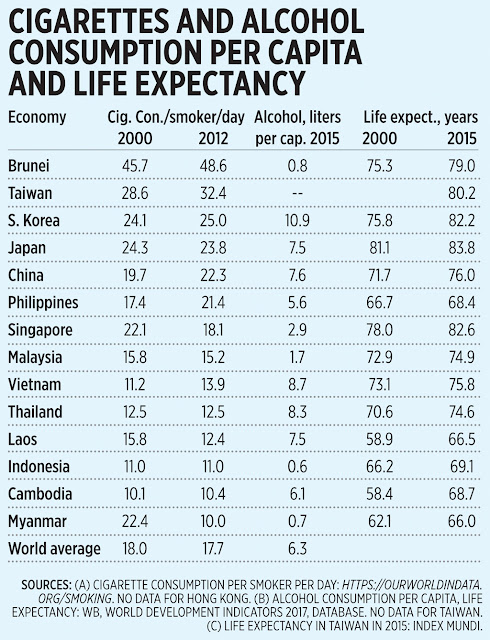 The numbers in the table show the following:

2. Philippines life expectancy keeps rising, not falling or remaining steady, although it is among the lowest in the region.

3. People in countries with a high incidence of smoking also have high life expectancies. Brunei, Taiwan, South Korea, Japan, China, the Philippines, and Singapore have high cigarette use — at least 18 sticks per day per smoker in 2012 — and their life expectancy was at least 76 years in 2015 — except in the Philippines where it was only 68 years.

4. People in countries with low cigarette use (less than 12.5 sticks per smoker per day) also have low life expectancies of only 69 years or less.

These observations tend to contradict the two premises and hypothesis mentioned above. There are many possible explanations for this, two of which would be the following:

1. People in rich countries can afford to buy more tobacco and alcohol products despite the rise in prices due to rising sin taxes; and,

2. People in poorer countries consume “less tobacco” referring to the legal and branded products, but in reality, they consume “more tobacco” from illegal, illicit, and fake/counterfeit products and suppliers. And such consumption is not captured by official government data.

So the statement “more sin taxes = less alcohol and tobacco use” can be wrong.

Even rich and developed Australia, which has more strict regulations against tobacco use, has experienced a rise in cigarettes smuggling. In a KPMG report in March 2017 entitled “Illicit Tobacco in Australia, 2016 Full Year Report,” the estimated share of illicit and smuggled tobacco was 10.8% of total tobacco consumption, average for 2007-2012. This rose to 14% average for 2013-2016.

Instead of calling for higher sin tax rates, the government should focus on significantly controlling smuggled and illicit products that are cheap and readily available. This alone will significantly reduce the incidence of smoking and drinking.


Another compromise would be a rise in sin taxes but income tax rates (personal and corporate) and/or VAT rates should go further down. The people should be spared from government’s policy and mentality of endless tax hikes, regardless of administration.
--------------