As a result, it is anti-development to impose new or higher taxes that will make electricity prices more expensive.

The new tax law called Tax Reform for Acceleration and Inclusiveness (TRAIN) did just that.

It imposed new taxes or raised existing taxes on oil products, coal, and electricity transmission. But TRAIN played favoritism by exempting from tax hikes natural gas and intermittent energy like wind and solar.

The Philippines inflation rate jumped to 4% in January 2018 from 3.3% in November-December 2017. Other Asian countries experienced flat or lower inflation last month. Why?

The most proximate explanation is the TRAIN law, even if various pass-through costs have yet to take effect. For instance, the hikes in coal tax, bunker fuel tax and VAT on transmission charge will be felt starting February billing. The expected inflationary pressure especially for oil price hikes contributed to this situation.

The table below is an attempt at quantifying the projected electricity price hikes because of TRAIN. 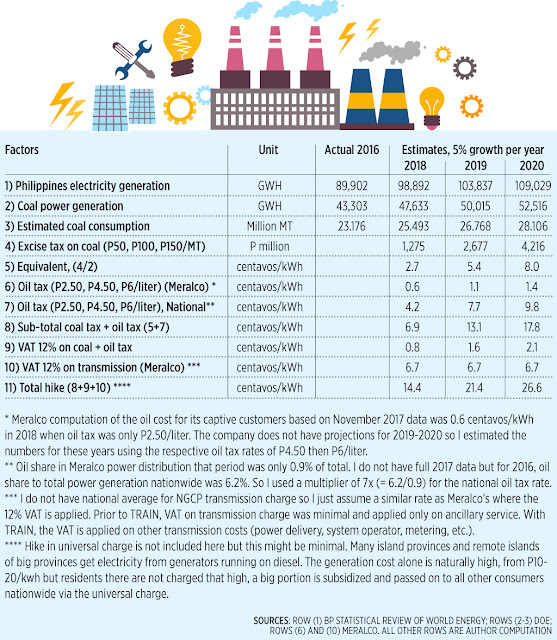 These estimates are made on certain assumptions that are based on available data. Changes in assumptions and more comprehensive, national data will change the results, upward or downward but the numbers will not be significant.

Based on these estimates, paying an extra 14 centavos/kWh this year, 21 centavos/kWh in 2019, and 27 centavos/kWh in 2020 might appear small for those consuming only 200 kWh/month. This consumption level implies that a household doesn’t have any air-con but maintains a small refrigerator and a few electric lights may have to pay an extra P28/month, P42/month and P54/month in 2018, 2019, and 2020, respectively.

But that is only for direct household electricity consumption. People who live in those small houses may work and/or purchase services in factories, schools, and universities, shops and malls, hotels and restaurants, hospitals and airports, etc. These enterprises consume tens of thousands of kWh per month and the additional electricity cost will be passed on the consumers, which might affect sales and hence, affect future salaries and benefits of workers. 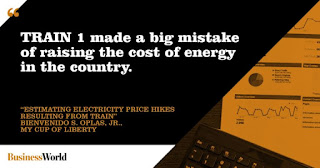 TRAIN 1 made a big mistake of raising the cost of energy in the country. The only consolation is that the law did not impose the whole oil tax hike of P6/liter in 2018 because it staggered the hikes in three years. And the law did not follow the distortionary Habito coal tax proposal of P600/ton, or even the Legarda proposal of P100, P200, P300/ton coal tax from 2018-2020.

Expensive electricity is never a virtue as so many things that we do now require electricity. TRAIN 2 should in fact cut more national and energy taxes because the Duterte administration is serious in its federalism agenda by allowing the states to create their own taxes and their own new government agencies.

With these things in mind, I leave you with a reminder from former US president Ronald Reagan: “The problem is not that the people are taxed too little. The problem is that government spends too much.”
----------------