* This is my article in BusinessWorld last January 2.

This should have been a “Top 10” list but due to space constraints, I limited it to only eight, divided into four news stories each for global and national.

GLOBAL
1 “Non-news” to many media outlets but good and big news to me: NO major energy catastrophes in 2017. No major oil spill, no gas blowouts, no reactor meltdowns, no major infrastructure destroyed by natural disasters, and energy prices did not rebound to their 2014-2015 levels.

2 In June 2017, the British Petroleum (BP) Statistical Review of World Energy 2017 was released and among the highlights of that report are: (a) China and US remain the planet’s biggest energy consumers, (b) increases in oil, natural gas, nuclear and renewable energies (REs) but decline in coal use, (c) for big Asian economies, coal use remain very high especially in China, India, Japan, South Korea and Indonesia (see chart). 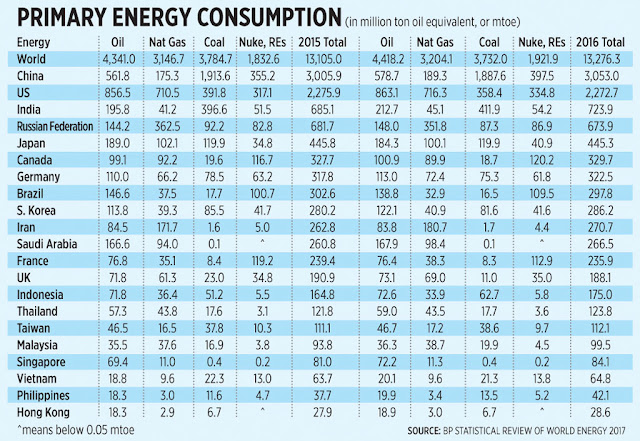 3 In September 2017, the US Energy Information Administration (EIA) released its “International Energy Outlook 2017” and among its projections are (a) In 2040, fossil fuels (oil, natural gas and coal) and nuclear will supply about 83% of global total energy consumption; 8% from hydro and 9% combined from wind, solar, geothermal, other REs, and (b) coal use is projected to be stable until 2040 and declines in China to be offset by increased use in India.

4 In November 2017, the “America First Energy Conference” was organized by the Heartland Institute in Houston Texas to analyze US President Trump’s pronouncement of US global “energy dominance”. “Energy dominance” is defined on two key goals: (a) meet all US domestic demand and (b) export to markets around the world at a level where they can “influence the market.” The important lessons from the papers presented are that (i) the US can have energy dominance in oil, natural gas and coal, but (ii) US cannot and should not aspire to have dominance in nuclear and REs. It was a very educational conference and I was the only Asian in the conference hall.

7 Continued exemptions from VAT of the energy output of intermittent wind-solar and other renewables but stable fossil fuel sources were still slapped with 12% VAT under TRAIN. Government continues its multiple treatment of energy pricing: High favoritism for wind-solar, medium-favoritism for natgas, and zero favor for oil and coal.

8 Supreme Court issuance of TRO in the implementation of Retail Competition and Open Access (RCOA) provision of the Electric Power Industry Reform Act (EPIRA) of 2001. In particular, the SC TRO covered five ERC Resolutions from June 2015 to November 2016, affecting the voluntary participation of contestable customers (CCs) for 750-999 kW and many Retail Electricity Suppliers (RES) with expiring licenses cannot get new ones yet, reducing potential competition. Data from the Philippine Electricity Market Corporation (PEMC) show that as of Nov. 26, 2017, there were 28 RES, 12 local RES, 862 CCs for 1 MW and higher, and only 78 CCs for 750-999 KW. There should be thousands of CCs in the lower threshold, there should be several dozens of RES nationwide to spur tight competition in electricity supply and distribution.


Overall, EPIRA of 2001 was a good law that introduced competition, broke government monopoly in power generation, broke private geographical monopolies in power distribution. The RE law of 2008, SC TRO 2017 and TRAIN 2017 are partly reversing the gains of EPIRA.
---------------

Posted by Bienvenido Oplas Jr at 7:07 AM