Climate tricks 64, Bitter cold and snow are caused by AGW

Al Gore the planet saviour. Less rain or lots of rain, less snow or more snow, less cold or bitter cold, the planet is in danger from anthropogenic (man-made) global warming (AGW) so we should send him and the UN more money. :-) 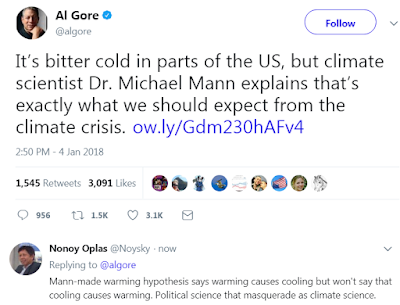 rom Dr. Roy W. Spencer:
My imagined conversation with Al Gore:
MR. GORE: This cold wave and snowstorm are just what global warming predicted!
ME: And what if the weather had been unusually warm and snow-free?
MR. GORE: That would also be consistent with global warming theory.
ME: So warm winters, cold winters, snowy winters, and no-snow winters are all predictions of global warming?
MR. GORE: Yes, that is correct.
ME: Are you aware how foolish that sounds to many people?
MR. GORE: I am aware that there are deniers of the current climate crisis we are in, yes.
ME: Ugh.

The Goracle spoke to an audience in Germany this week where he told them that “the entire North Polarized cap will disappear in 5 years.”

Global messengers of fake climate news and predictions have no shame. They have to continue the dishonesty and deception, non-stop, even if nature does not obey or conform with their ever-warming-predictions.
--------------