* This is my column in BusinessWorld last December 27.

The top 5 exporters in merchandise goods in 2015-2016 were China, USA, Germany, Japan, and Netherlands. Germany and Netherlands have the advantage of easier trade because they both are located in one continental land area and hence, can export by land, unlike China, US, and Japan which have to export largely by water.

Eleven (11) Asian economies, five of them from the ASEAN, belong to the top 30 biggest merchandise exporters in the world in 2015-2016. The Philippines remained in ranks 45th-46th.

In commercial services, global exports have slightly increased from $4.76 trillion in 2015 to $4.81 trillion in 2016. The top 5 exporters in were US, UK, Germany, France, and China. Such services include revenues from tourism and remittances of nationals working abroad. 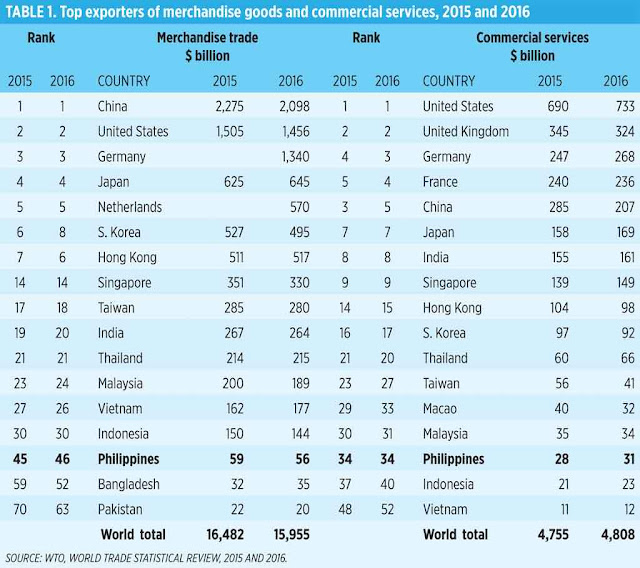 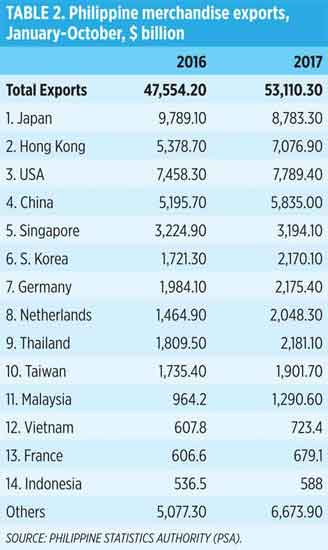 Almost all export markets have increased their purchase from the Philippines in 2017 except Japan and Singapore, but the export levels to these two countries remain high.

Preliminary figures for 2017 point to a recovery and higher levels in 2017 compared to 2016, Philippine figures provide the clue. And not only in exports but also in imports.

The statement “If America (or Europe) turns protectionist, Asia loses” is wrong. Whoever starts serious protectionism is the loser. Free trade creates good will with other countries while expanding the choices and options for local consumers and manufacturers, which expand their productive capacity.

Asia will remain as a very important player in global trade of goods and services, also in investments, for two important reasons. One, growth momentum remains high, many economies growing 5% or more (GDP growth) a year. Two, huge and generally young population especially in India, Indonesia, Philippines, and Vietnam, comprising nearly 1.8 billion people with an average age of only 24-25 years old which is one-half of the average age of Japan and many developed countries in Europe.


Freer trade philosophy and policy will resurface in the coming years. Trade is the biggest instrument to prevent wars among countries. As the famous French economist and writer Frederic Bastiat once wrote, “If goods cannot cross borders, soldiers will.”
-----------------