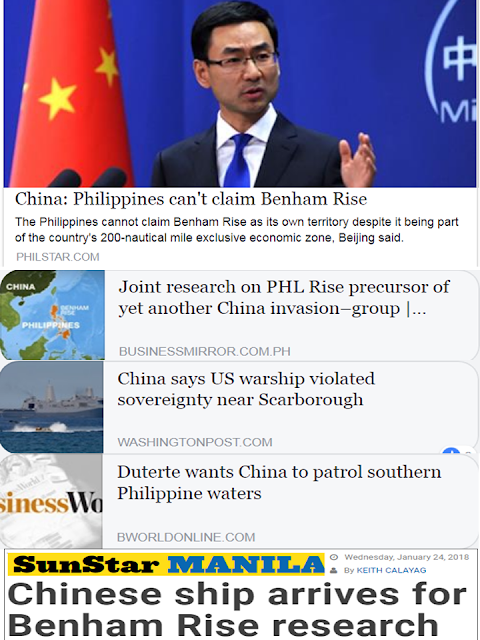 So President Duterte would keep his kow-tow humiliation to China?

Last January 24, these are just two of the many news reports on the subject.


FILIPINOS HAVE BEEN EXPLORING THE BENHAM RISE REGION FORYEARS
by Jay Batongbacal
January 24, 2017.

[Fair warning: for the first time, i am about to really rant about something]


I was going to write on this MSR brouhaha again and try to do something that could actually help this government clarify some things they just don't get, but then I am outraged by a huge hollow-block thrown against the entire FIlipino nation.

Pres sPox Roque's claim that Filipinos cannot afford to explore Benham Rise, that "no one can do it", that the Philippines "needs China" to do it, and "only China qualifies" is completely wrong, based on ignorance, a serious disservice to Filipino scientists in particular and the Filipino people in general, and an over-exaggeration of China's potential role in Philippine ocean sciences.

In the first place, FIlipinos have been exploring the Benham Rise Region for years now:

1) From 2004-2008, then again in 2010, the DENR's National Mapping and Resource Information Authority sent BRP Hydrographer Presbitero on multiple bathymetric and hydrographic surveys of the Benham Rise Region, producing a highly detailed 3D digital bathymetric model (resolution of 1 meter for an area covering 30 million hectares) of the entire region compliant with the highest quality standards of the International Hydrographic Organization. That was a Philippine vessel with full Filipino crew (mariners of the Coast and Geodetic Survey Division) funded completely by the Philippine government. That batheymetric model was absolutely necessary for the Philippines to support its claim to the continental shelf beyond 200 nautical miles with 2D and 3D geomorphological analysis.

2) For the past decade, the DA's Bureau of FIsheries and Aquatic Resources has been annually conducting fisheries research and experimental fishing expeditions in the Benham Rise Region, particularly in areas between the coast of Luzon and Benham Bank, to determine the tuna fishery potential of its waters. This has been undertaken by the M/V DA-BFAR multi-mission research vessel for so long, that BFAR has confidence in promoting and opening the region as the country's new tuna fishing ground.

3) Two oceanographic research cruises have been organized, funded by the DOST, supported by DA-BFAR, and with the participation of the University of the Philippines, De la Salle University, Silliman University, and other academic institutions (apologies as I forget), which gave the Philippines its initial glimpse of Benham Bank, the shallowest portion of Benham Rise. These were done in 2014 and 2016. A third cruise is being planned for this summer 2018 (fingers crossed). All are crewed by Filipino scientists, marine science students, Navy and Coast Guard technical divers, and mariners. Supplementary support/assistance so far was provided by Oceana, a non-government organization advocating marine resources conservation, in the form only of a remotely-operated vehicle unit and technicians to control it, and additional scientists and technical divers to augment the 2nd expedition's personnel. Both previous expeditions were Philippine-funded, the same goes for the planned third cruise. The first people to actually descend and "touch" Benham Bank 50m below the Pacific, were Filipino technical divers. That's our "Neil Armstrong setting foot on the moon" historical moment.

4) Since 2016, the UP National Institute for Geological Sciences and UP Marine Science Institute have been collaborating with counterpart institutions from Korea and Japan, namely the Korea Institute for Ocean Science and Technology, and the Japan Agency for Marine-Earth Science and Technology, to begin initial exploration of the seabed in Benham Rise itself under separate memoranda of agreements. As I understand it, among other things, the Philippines intends to get seabed core samples through this arrangement, which push forward the resource assessment and exploration efforts for the Rise.

5) Geologists of the UP NIGS have acquired and reviewed available public domain data from multiple scientific research cruises by multiple nations that have passed through the Benham Rise Region, and produced academic papers and analysis of their own, which were used as evidence to support the claim to Benham Rise. The detailed tectonic history, geological characteristics, and underwater topography have been determined and analyzed by these Filipino scientists, and their findings tested and and papers validated by foreign scientific advisors as well as the scientific community through the continental shelf claim process and the academic press.

6) Marine biologists of UP MSI, UP SESAM, and other schools have been analyzing the many samples and observations that they gathered from the two research cruises, and making some interesting findings and potential discoveries on their own. These are Filipino researchers, earning salaries and wages from Philippine sources, and working in accordance with stringent scientific standards and procedures on par with anyone else in the world.


7) In addition to the small research vessels of UP, DENR and DA-BFAR, the Philippines now has a deep-sea research vessel in the form of the BRP Gregorio Velasquez that was handed over to the Philippine Navy by the US. This ship used to be the USS Melville, carrying a crew of 23 plus up to 38 marine scientists on board, and was formerly operated by the Scripps Institute of Oceanography. It played a key role in US oceanography for over 45 years, and is still going strong. The PN, in collaboration with marine science institutions, is developing its own capacity to operate and maximize the use of this venerable vessel for hydrography and marine science. Last summer, the PN and UP-MSI took the ship "around the block" conducting a running MSR data-collecting cruise spanning the waters of Mindoro, KIG, Southern Palawan, the Sulu Sea and Tubbataha Reef. Even the PN, with multi-purpose ships like the BRP Davao del Sur, has demonstrated that it can operate in the area, and with appropriate crew and equipment, can host all manner of research activities in addition to military purposes.

8) By the way, the Philippines has yet to explore the possibilities of using new technologies that are becoming fast accessible and affordable. Technologies and techniques for manufacturing floating and underwater autonomous vehicles (sometimes called "gliders" or "drones") guided by artificial intelligence, each unit costing around USD100,000 each, have been offered for free to the Philippines by at least one friendly country, not China. This could mark a new era in indigenous marine resource exploration in the near future. Other countries are already using these gliders to conduct oceanographic researches in the deep ocean at a fraction of what they used to cost. A small squadron of AI-guided gliders could quickly conduct deep seabed exploration in the deep oceans at much less expense than even current levels. And I have no doubt that the Philippines can do it as well.

FOR GOVT TO SAY THAT FILIPINOS NEED CHINA TO EXPLORE BENHAM RISE AS IF THERE IS NO ONE ELSE THAT CAN DO IT IS BOTH A BRAZEN FALSEHOOD AND A DISSERVICE TO THE HARD WORK AND DEDICATION, THE TALENTS AND CAPACITIES, OF THE FILIPINO SCIENTIFIC COMMUNITY, a number of whom I have worked with and call my colleagues and friends. I have had the privilege of working on international legal claims with these talented people, through the Tubbataha Reef Particularly Sensitive Sea Area Application before the International Maritime Organization, and the Extended Continental Shelf Project which generated TWO claim documents (one for Benham Rise Region, successfully submitted and validated, and another for the Western Palawan Region which up to now has been sitting on somebody's desk, but that's another story entirely) for the Commission on the Limits of the Continental Shelf.

Although China is indeed a formidable scientific force in the contemporary ocean sciences, IT IS BY NO MEANS THE ONLY ONE. To date, even without China, the Philippines has been able to assemble its own modest scientific expeditions, and continues to develop its capacities and capabilities to do so, both on its own and with willing partners. CHINA IS AN OBVIOUS OPPORTUNITY, BUT NOT AN ABSOLUTE NECESSITY. To imply that only China can give the Philippines any hope in exploring and exploiting Benham Rise is a twisted and gross exaggeration of its potential role in cooperation with the Philippine marine science community. While the possible benefits from cooperation with China should be recognized, we should not be fixated with it.

THE LIMITATIONS UPON PHILIPPINE MARINE SCIENCE CAPACITIES AND CAPABILITIES IS NOT SO MUCH A MATTER OF POVERTY AS IT IS A MATTER OF PRIORITIES. The modest efforts to date demonstrate that with the proper budgetary support from government and clear research goals and objectives, as well as a good vision and great confidence in our own people and expertise, the Philippines CAN do these things on its own. It may take longer, and may be more difficult, BUT WE HAVE SHOWN THAT WE CAN DO IT. We may have relatively few marine scientists and even fewer marine science vessels, but they have done a lot despite limited resources. What more if government actually gave the sector the attention and respect it deserves?

THIS GOVT'S DENIGRATION OF FILIPINO SCIENTISTS AND FILIPINOS IN GENERAL, CLAIMING THEY CANNOT EXPLORE BENHAM RISE WITHOUT CHINA OR CHINESE MONEY, IS A TOTAL SHAM MEANT TO DISEMPOWER AND DEMEAN FILIPINOS AND THEIR CAPACITY AND CAPABILITY AS A PEOPLE. IT MAKES FILIPINOS APPEAR HELPLESS, CLUELESS AND PENNILESS ON SOMETHING ALREADY DEMONSTRATED THEY ARE NOT. WE ARE NOT A NATION OF BEGGARS FOR SMALL CHANGE, EVEN THAT COMING FROM A COUNTRY AS BIG AND RICH AS CHINA.