I am reposting this good article in Manila Standard by a friend, Eric.
--------- 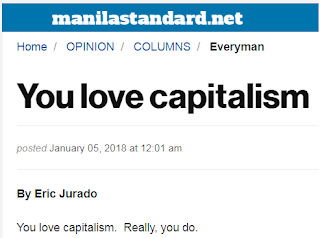 You love capitalism.  Really, you do.

And you can’t stand big government. Really, you can’t

Don’t believe me? Then I’ll just have to prove it to you.

Do you use an iPhone? Android?  Macbook?  PC?

Read on a Kindle?

Watch TV and movies on Netflix? Videos on YouTube?

Grab a ride with Uber?

Book a room with Airbnb?

You probably use many, if not all, of these things, and, if you’re like me, you love them. In today’s world, they’re practically necessities.

Where do you think they came from?

From entrepreneurs with great ideas and the freedom to test them in the marketplace. That is what is known as . . . capitalism.

Now consider some other things you probably do:

Have you been to the LTO?

Gone through security at Naia?

Or called any government office, for that matter?

Why is going to Uniqlo so fun but going to the LTO so painful? Because one has nothing to do with government, and the other is the government. One needs to satisfy its customers to survive and grow. The other doesn’t.

The purpose of government is not to create products. And we don’t expect it to. But if you thought about it for a few moments, you’d realize you don’t want the government involved in just about anything private business can do.  That’s because profit-motivated individuals have to work hard to please their customers—you. Government agencies don’t have to please anyone.

Can you imagine if Steve Jobs had to seek government approval for every new design of the iPhone? We’d have been lucky to get to iPhone 3G.

Look at Uber. Just a few years ago, summoning a private car and driver in a few minutes that would take you where you wanted to go was truly a service available only to the wealthiest people. But now, thanks to capitalism, private rides are an affordable option for ordinary people all over the world.  Until Uber came around, if it started to rain in Manila and you wanted to grab a cab, good luck. Too many rain-drenched people and too few cabs available. Uber had a better idea. Rain falls. Demand for rides spikes. Raise prices to give more Uber drivers an incentive to hit the road. Ride-in-the-rain problem solved.

Airbnb is another example. Only a few years ago, if you were going on vacation with your friends or family, hotels were just about your only option. But hotels are expensive and often don’t provide all that much in terms of space, amenities or interesting neighborhoods.

If you wanted to find out if individual homeowners were making their homes or condos available for a few nights, you’d have to scour internet postings.

But then Airbnb came along, giving anyone with a computer or smartphone access to over two million homes in 190 countries. You can find places with hot tubs and pools; or, if you’re on a tighter budget, you can rent a room, or even just a couch.

Government never could have done this. What motivation would it have? How would it even know we wanted services like Uber or Airbnb?  We didn’t know it, until risk-taking entrepreneurs made it possible. Thanks to capitalism. And no thanks to government which, more often than not, just gets in the way.

Cities across the globe are putting up barriers to slow down or shut down services like Uber and Airbnb. Making rules may be the only area where the government shows creativity. Economic growth has the best chance of happening in the absence of that rulemaking.

According to economist Adam Thierer, the internet, to use just one important example, was able to develop in a regulatory climate that embraced what he calls “permissionless innovation.” This approach to regulating allows entrepreneurs to meet their customers’ needs without first seeking government approval.

So, do you love capitalism? Of course you do. You practice it every day. It’s time to preach it.