* This is my column in BusinessWorld last January 18.

“The real bosses, in the capitalist system of market economy, are the consumers… The entrepreneur profits to the extent he has succeeded in serving the consumers better than other people have done.”

As a result, factories, hotels, malls, or hospitals have no choice but to source their energy requirements from electric cooperatives (EC) or privately run distribution utilities (DU) which were given the franchise to serve these particular locations.

However, Rule 12 of the Electric Power Industry Reform Act (EPIRA) of 2001 (RA 9136) has changed this constitutional and legal guarantee of monopoly through the Retail Competition and Open Access (RCOA) provision.

RCOA breaks the geographical monopoly and allows retail competition in electricity to a contestable market composed of medium to big-ticket electricity consumers. Open access allows any qualified person or entity to use the transmission and/or distribution system and related facilities subject to payment of retail wheeling rates.

However, in early 2017, the implementation of the RCOA was suspended by a Supreme Court temporary restraining order (TRO). In effect, five resolutions issued by the Energy Regulatory Commission (ERC) from June 2015 to November 2016 were likewise suspended. Besides affecting the voluntary participation of contestable customers (CCs) for 750-999 kW, the suspension also reduced potential competition because many retail electricity suppliers (RES) — especially those whose licenses were expiring — were unable to renew them. 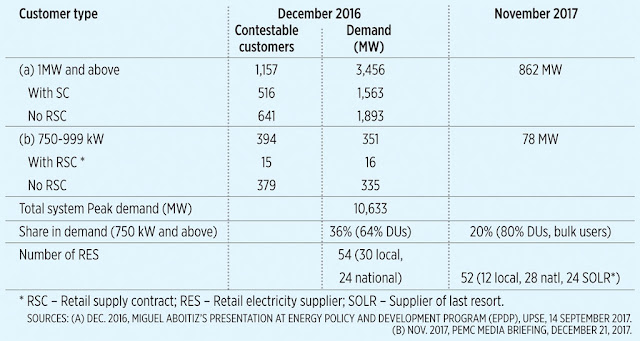 A BusinessWorld report last Jan. 8 entitled “DoE to seek SC guidance on retail competition” said that the department issued a new circular allowing the switching from captive to contestable consumers to allow greater participation from new players. It also allowed the ERC to continue issuing licenses to RES and renew the licenses of RES with expiring licenses.

Here is a summary of the benefits of RCOA to consumers and the Philippine economy in general. Many of these were discussed at the EPDP presentation last September.

1. Contestable customers will have more choices in pricing and power supply contracting — privileges that are not available to small and captive customers.

2. Small customers can aggregate their demand or allow an aggregator to pool their combined demand to become contestable customers.

3. Contestable customers can choose the type or source of power they want. Some simply want cheaper prices, others want stable 24/7 electricity even if costs are higher than those offered by their previous ECs or DUs, whose services may be unreliable. For their part, other consumers who wish to source all of their energy needs from renewables can also do so — as long as they are willing to fork out more money for the privilege.

4. Contestable customers can have full control of their generation costs and are not required to subsidize small and/or off-grid consumers, unlike traditional end-users. They can choose to have flatter load factors by using more baseload, an arrangement that is ideal for companies, especially those that use power 24/7 like manufacturing plants, big hotels, hospitals, and BPO centers.

5. Customers can shift demand to off-peak hours and can “peak shave” to reduce their electricity price. Consumers have big leeway and choices based on their needs and corporate philosophy and branding.

6. There are more than 50 RES to choose from, shown in the table above. Contestable customers can also engage in financial hedging or enter into contracts with any financial provider to hedge its existing contact structure and they need not necessarily be an RES.

7. More investments in power generation can be expected as power companies can contract directly with customers and bypass ECs, a number of which have issues with paying generation companies on time.

The SC TRO has therefore resulted in the following unintended consequences:

1) It disallowed many contestable customers in the 750-999 kW demand category to enjoy RCOA, forcing them to stay with their ECs or DUs and depriving them of the benefits discussed above.

2) Other eligible customers have been discouraged from availing the RCOA due to lingering uncertainties.

3) DUs also face uncertainties whether to get additional generation contracts or not for contestable customers because the latter can leave them anytime once the TRO is lifted.