* This is my column in BusinessWorld last January 11.

Under a system of perfectly free commerce, each country naturally devotes its capital and labour to such employments as are most beneficial to each. By rewarding ingenuity… it distributes labour most effectively and most economically: while, by increasing the general mass of productions, it diffuses general benefit, and binds together by one common tie of interest and intercourse, the universal society of nations throughout the civilized world.

Classical British philosophers and political economists were the pioneer thinkers in articulating the net benefits and advantages of free trade over autarky and protectionism. These include David Ricardo, Adam Smith (“A nation may import to a greater value than it exports for half a century… and yet its real wealth, the exchangeable value of the annual produce of its lands and labor, may, during the same period, have been increasing in a much greater proportion,”) and David Hume (“the increase of riches and commerce in any one nation, instead of hurting, commonly promotes the riches and commerce of all its neighbors.”)

Perhaps it is no coincidence that former British protectorates and colonies in Asia are among the most rabid free traders in the world such as Hong Kong, Singapore, and Brunei.

Among the important indicators of how free an economy to global trade and commerce are (a) the mean and average tariff rates, and (b) standard deviation of tariff rates, which show how wide the variations among tariffs are that indicate high protectionism of certain sectors compared to other sectors.

Hong Kong, Singapore, and Brunei have impressive numbers: zero or very low tariff rates and standard deviation is also zero or very low. This means that there is little or no favoritism and protectionism of certain sectors. As a result, consumers and local producers are given the greatest freedom to choose various products and commodities available from around the world to come into their shores.

Japan, Malaysia, and Taiwan have low tariffs but their standard deviations are in double digits. For their part, the Philippines, Myanmar, and Indonesia have declining tariffs and single-digit variations, which are good.

Thailand, Vietnam, and South Korea seem to have not liberalized fast enough because of their relatively high mean tariffs and high tariff variations (see table). 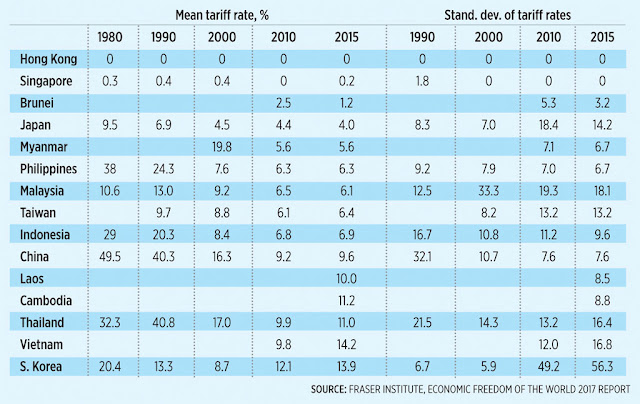 David Ricardo has articulated the classical definition and theory of “comparative advantage.”

This theory has a beautiful application for developing economies like the Philippines to avoid concentrating their resources — human, financial, and land, among others — on few goals like food “self-sufficiency” when they can diversify their resources and earn higher income from manufacturing, tourism, and other sectors.

These economies can then use surplus and savings to purchase food and other commodities from abroad, especially from neighbors that have better natural endowment in bigger food production.

From the numbers above, there is a mixture of results in trade liberalization by East Asian economies. Overall tariff rates have declined through time but tariff variations have also increased in some countries and economies.

The best outcome would be via global and multilateral liberalization under the WTO but this is also the most difficult, most complicated, and most bureaucratic.

After 22 years (1995-2017) of regular global negotiations, there were no major achievements except the Trade Facilitation Agreement (TFA) which needs legislative ratification by all signatory countries.

Unilateral liberalization is the simplest and fastest route to take. Just consider the interests of local consumers and producers in general — to have the widest choices possible in terms of prices and product quality. More choices means more freedom, more savings and by extension, higher incomes.