Those conclusions were made by Dr. Chatib “Dede” Basri in his presentation, “Can subsidy and protection do any good for the poor?” at the Economic Freedom Network (EFN) Asia conference in 2004. At that time, he was a faculty member of the University of Indonesia and individual member of EFN. He used an econometric model and the Grosman and Helpman (G-H) model (trade protection is the result of bargaining between government and various lobby groups). The inevitable conclusion of his paper was that market reforms and the reduction, if not removal of dependence by the poor on the state will actually help them and taxpayers over the long term.

Dr. Basri later became Minister of Finance from May 2013 to October 2014 when the administration of Indonesian President Susilo Bambang Yudhoyono ended. Dr. Basri will be among the keynote speakers in the Asia Liberty Forum (ALF) this coming Feb. 10-11 at Mandarin Hotel Jakarta, Indonesia. The event is sponsored by the Atlas Foundation and co-hosted by the Center for Indonesian Policy Studies (CIPS).

Aside from Dr. Basri, other important speakers in this year’s conference will be the following:

9. Parth Shah, president of the Centre for Civil Society, India.

Are Asian economies getting more market-oriented or state-distorted? Is there greater rule of law now or greater rule of men? Are public institutions more protective or more confiscatory of private property rights?

The GCI is composed of 12 pillars and the first pillar are Institutions. These are composed of 21 sub-pillars like property rights, IPR protection, diversion of public funds, public trust in politicians, irregular payments and bribes, judicial independence, favoritism in decisions of government officials, burden of government regulation, efficiency of legal framework in settling disputes and challenging regulations, transparency of government policy making, and reliability of police services.

I checked the latest WEF 2017-2018 report for East Asian economies and compared with the report two years ago for pillar #1, Institutions (see table). 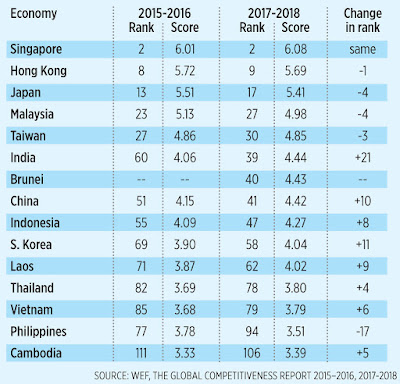 So for Institutions, the numbers above show three important results: One, out of the 144 countries and economies covered, many East Asian nations land in the first half (i.e., 1st to 72nd), 11 of the 15 economies mentioned above. Singapore and Hong Kong are in the top 10.

Two, the biggest gainers in global ranking are India (+21!), South Korea, China, and Laos. And three, the biggest loser in ranking is the Philippines, dropping 17 places or notches.

In the WEF Executive Opinion Survey 2017, the most problematic factors for doing business in the Philippines were: (1) inefficient government bureaucracy, (2) inadequate supply of infrastructure, (3) corruption, (4) tax regulations, and (5) tax rates.

For Asian countries outside the first half like Thailand, Vietnam, Philippines and Cambodia, there is an immediate need to improve the rule of law and further debureaucratize, deregulate and depoliticize the economy.
-------------