Interaksyon's "Fat-Free Economics" column was my other home for two years, early 2012 to mid-2014. I wrote several dozen articles there with the support of my editor and friend, Arnold Tenorio. Am sad with this news... 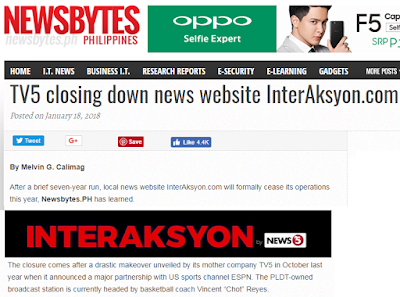 My last energy article there, January 2014, Fat Free Econ 53: WESM, Myths and Realities.
I debunked the claims that the big electricity price hike in December 2013 was caused by "collusion" by several power companies (hence, fake news).

Seems this was my last column in interaksyon, July 31, 2014, Fat Free Econ 55: The President's 5th SONA and Market-Oriented Reforms.

I concluded here, "The President is a Liberal, not a socialist like Bayan Muna or Akbayan, nor a populist like the other political parties. Let us expect more liberal and market-oriented policies from him and his team in his remaining year."

Goodbye interaksyon and thank you for the opportunity to spread the philosophy of limited/minimal government on those two years.
Posted by Bienvenido Oplas Jr at 11:50 PM