Starting this week, I will contribute a weekly article at interaksyon.com, TV 5's online news portal. My column title there will be "Fat-Free Economics", I defined it in this article. So the new thread in this blog will be my articles for the online paper.
----------

"Fat-Free Economics" means resource prioritization and allocation based on the strict merging of rights and responsibilities, entitlements and obligations. So this blog will be about how to avoid free-riding attitude, fat-filled spending and unjustified coercion and taxation.
But before we dive into the heart of the matter, this maiden piece will go briefly over the macro economy, painting the landscape on which individuals, households, firms and other micro players move to create the macro economy."Fat-Free Economics" means resource prioritization and allocation based on the strict merging of rights and responsibilities, entitlements and obligations. So this blog will be about how to avoid free-riding attitude, fat-filled spending and unjustified coercion and taxation.
We start with a country’s economic output. In introductory economics, one will encounter this equation in measuring national output:
Y = C + I + G + (X-M)
National output (Y) is the combination of private consumption expenditures (PCE, or simply C), capital formation or investments (I), government consumption (G), and net exports (exports minus imports, or X-M).
C is composed of household and enterprise spending on food, education, healthcare, housing and house rental, electricity, vacation, and so on. I and G are self-explanatory. Net exports (X-M) would include both merchandise goods and services.
Now, Y can be gross domestic product (GDP) or gross national product (GNP). What’s the difference between the two?
National income accountants add to GDP the "net factor income from abroad" (NFIA, which is OFW remittances minus expats' remittances abroad), then they introduce another item, "errors and omissions," to come up with GNP. In other words, GNP equals GDP plus NFIA plus errors and omissions.
NFIA can be big and thus, GNP appears larger than GDP. Errors and omissions involve some manipulations the government in power makes to project a higher than actual GNP.
So, GNP equals production of goods and services by nationals only, both in the home country (Philippines) and abroad. Thus, production and income by OFWs, wherever they are, are counted, while income by foreigners here is excluded. This looks unfair, right? So GDP was introduced.
GDP equals production within the national territory by both locals and foreigners. OFWs’ income abroad is excluded while foreigners’ income here is included. Thus, the term “domestic production.”
OFWs’ income enters the equation as C and I, the latter often in micro investment like having a sari-sari store or a jeepney or farm tractors.
C constitutes around 73 percent of GDP, while I is 15 percent and G is 10 percent. The high contribution of C means that even if I, G and (X-M) grows slow or not at all, GDP growth will still be high with a fast expanding C.
Thus, ours is mainly a consumption-driven economy and this has two important implications: First, someone’s consumption is somebody else’s production. The moment government slaps a tax – be it VAT, excise tax, vehicle tax, property tax, entertainment tax, or import tax – economic production suffers.
The second implication stems from the first: our big population contributes to high consumption; thus, higher population means higher economic growth both in the short- and long-term. Countries with low population, or with big populations but have low or zero population growth, have to rely on robots and foreign workers to help expand their output.
Having said the above, the Philippine income tax policy is rather restrictive. Someone earning P500,000 per year or higher (around P45,000 per month), net of deductions, will surrender 32 percent (P14,400 or more) of that to the government. So one may wonder, given the high amount of money transfer from private citizens to the government, why has C grown fast all these years?
One answer is tax dodging and cheating. Many businessmen, professionals, those in the informal sector, etc. pay very little or no income tax each year. Money that could have gone to the government was used for various household spending, from food to housing, education, hiring a nanny for the kids, and so on.
Supporters of big and more government argue that state spending stimulates the economy. This does not hold much water as many of the functions that are believed to be the main domain of government – like police, peace and order, education, housing, healthcare, agriculture, etc. – are now better done by the private sector and requires no taxation and coercion.
Take peace and order for instance. The people who secure our buildings and villages, schools and universities, shops and malls, churches and banks, airports and seaports, are private security guards, not the police. When those security agencies are lousy, say they cannot control repeated robbery incidents in a residential village, the homeowners association can kick them out and replace them with another agency.
People cannot do that with the police, or public school teachers or public health and housing personnel. The burden of proving their inefficiencies and in causing their removal from office is larger than the cost of bearing their inefficiencies.
-------

Addendum to the above paper:

2. Here is the table in the original article but was not included due to space constraints. The acronyms and their counterparts in the above equation:

PCE is Private Consumption Expenditures or C,
GC is Government Consumption or G,
CF is Capital Formation or simply Investments, I,
X and M are exports and imports, and
SD Standard Deviation I think, are the errors and omissions. 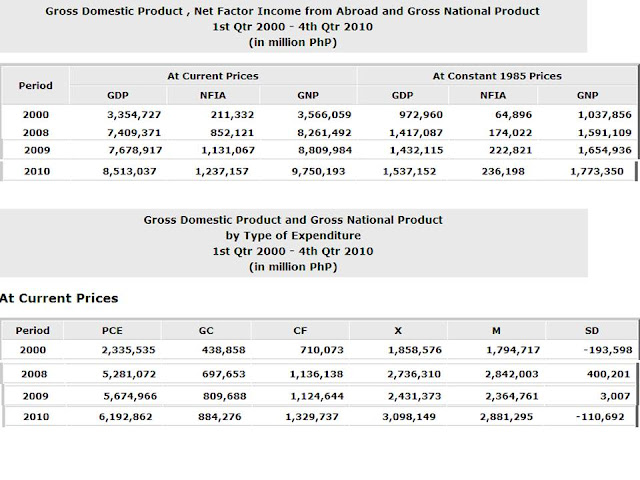