Darkness is cool if you're in some far flung areas and want to commune with nature -- the fireflies, the infinite stars on a cloudless night, listen to various sounds of animals and bugs like frogs and crickets, and so on. But if you're in urban areas or in places where work is impossible without electricity (hospitals, malls, offices, etc.), darkness and power outage is a curse.

Now a big environmental NGO has spread a new fashion of turning off lights one hour each year, called the "Earth Hour" (EH) by the World Wildlife Fund (WWF), and many people around the world have rejoiced at their initiative. But their biggest fans actually are in North Korea and many cities in Africa. There, people have no electricity many hours a day, 365 days a year. They have very power plants and oil-fed generators that emit lots of CO2 that contributes to global warming and climate change. So the guys there are great saviors of the planet.

Before going to the EH campaign, I will post 3 brief papers from 3 different sources about the recent global temperature, the role of clouds on global temperature and climate (hey, it's been almost 3 weeks of cloudy sky here, sometimes rainy days, in the supposedly dry-hot-summer month of March), and Arctic sea ice extent. Is it true that the speed of ice melt there will soon result in an "ice-free" Arctic summer in just a few years?

“Winter That Wasn’t” Was The Coldest Since 1993

Time Magazine called this past winter “the winter that wasn’t.” So did Joe Romm and lots of other insular global warming rednecks in the US.
Satellite data shows that winter 2011-2012 was the coldest globally since 1993, and eighth coldest on record.

A paper published last week in the Journal of Climate utilized satellite measurements to demonstrate that European hot summers since the 1980s are associated with a reduction in cloudiness. These observations corroborate other recent papers showing that clouds exert a negative feedback on global warming. Alarmists [such as the 'Skeptical Science' site here] hypothesize that clouds exert a net positive-feedback leading to a 'runaway greenhouse effect', but observational data from multiple papers* have shown that clouds instead exert a strong net negative-feedback cooling effect on the climate.

European hot summers associated with a reduction of cloudiness

National Climatic Data Center, Asheville, NC, United States
A pronounced summer warming is observed in Europe since the 1980s that has Been accompanied with an increase in the occurrence of heat waves. Water deficit that strongly reduces surface latent cooling is a widely accepted explanation for the causes of hot summers. We show that the variance of European summer temperature is partly explained by changes in summer cloudiness. Using observation-based products of climate variables, satellite-derived cloud cover and radiation products, we show that during the 1984-2007 period Europe has become less cloudy (except of northeastern Europe) and the regions east of Europe have become cloudier in summer daytime. In response,the summer temperatures increased in the areas of total cloud cover decrease, and stalled or declined in the areas of cloud cover increase.Trends in the surface shortwave radiation are generally positive (negative) in the regions with summer warming (cooling or stalled warming), while the signs of trends in top-of-atmosphere (TOA) reflected shortwave radiation are reversed. Our results suggest that total cloud cover is either the important local factor influencing the summer temperature changes in Europe or a
major indicator of these changes.

Could Arctic Sea Ice Decline be Caused by the Arctic Oscillation?

While the IPCC claims that recent Arctic sea ice declines are the result of human-caused warming, there is also convincing observational evidence that natural cycles in atmospheric circulation patterns might also be involved.
And unless we know how much of the decline is natural, I maintain we cannot know how much is human-caused.
In 2002, a paper was published in the Journal of Climate entitled Response of Sea Ice to the Arctic Oscillation, where the authors (one of whom, Mike Wallace, was a co-discoverer of the AO) shows that changing wind patterns associated with the AO contributed to Arctic sea ice declines from one decade to the next: from 1979-1988 to 1989-1998.
The Arctic Oscillation involves sea level pressure patterns over the Arctic Ocean, North Atlantic, and North Pacific. Since sea ice moves around with the wind (see this movie example), sea level pressure patterns can either expose or cover various sections of the Arctic Ocean.
When there are many winters in a row with high (or low) pressure, it can affect sea ice cover on decadal time scales. Over time, ice can become more extensive and thicker, or less extensive and thinner.
There is a time lag involved in all of this, as discussed in the above paper. So, to examine the potential cumulative effect of the AO, I made the following plot of cumulative values of the winter (December-January-February) AO (actually, their departures from the long-term average) since 1900. I’ve attached a spreadsheet with the data for those interested, updated through this past winter. 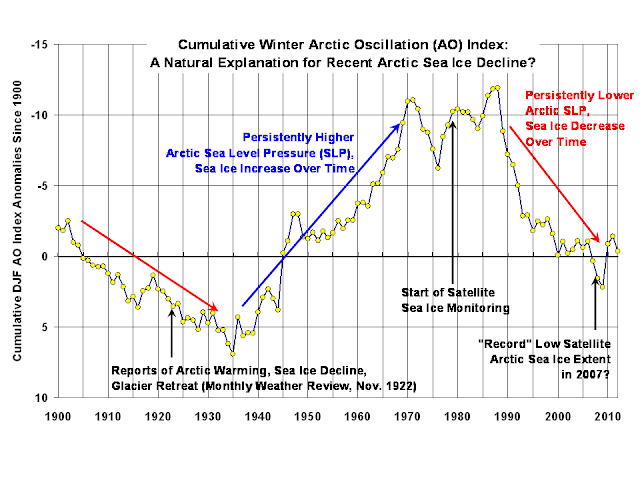 Consistent with the analysis in the above-cited paper, the sea ice decline since satellite monitoring began in 1979 was during a period of persistent positive values of the AO index (note the reversed vertical scale). Since the satellite period started toward the end of a prolonged period of negative AO values, this raises the question of whether we just happened to start monitoring Arctic sea ice when it was near peak coverage.
Note that back in the 1920’s, when there were reports of declining sea ice, record warmth, and disappearing glaciers, there was similar AO behavior to the last couple of decades. Obviously, that was before humans could have influenced the climate system in any substantial way.
I won’t go into what might be causing the cyclic pattern in the AO over several decades. My only point is that there is published evidence to support the view that some (or even most?) of the ~20 year sea ice decline up until the 2007 minimum was part of a natural cycle, related to multi-decadal changes in average wind patterns.
------------ 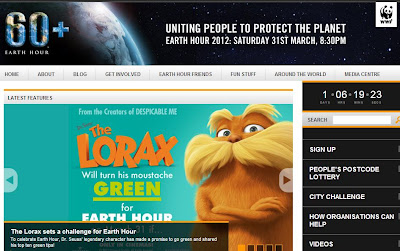 Photos, cartoons, testimonies, zero graph or scientific discourse.
Go to the EH-Philippines campaign,  http://www.wwf.org.ph/earthhour/, the same, testimonies and photos, including this one. 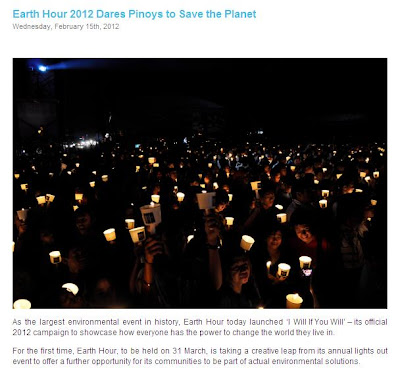 Darkness and candles are cool because they help "save the planet". Really. I bet that most of the participants in the "switch off lights, they contribute to global warming" have cellular phones, or IPads, or laptops, flat tv and other gadgets and electronic products that require lots of electricity.

This is not to demonize the participants of the EH campaign. At one time, I was also a believer of the man-made warming religion, and many of my friends still believe this political movement.

Rather, this is to expose the deception and treachery by the WWF, along with the UN, national governments, Greenpeace and many other groups, NGOs and institutions. It was Friedrich Hayek who wrote that deception has the same result as coercion. Let me illustrate this.

Supposing a person or an institution wants to steal P1 million from person A with no benefit,direct or indirect, to that person. There are various ways to do this.

a) Coercion via extortion, say a kidnapping group will not release a loved one unless the family will pay up that amount.
b) Coercion via taxation, the government will collect via mandatory witholding income tax system.
c) Deception by promising a person that his money will be doubled in just 1 or 2 months if he will contribute  that amount to a very promising and magical investment scheme. Then the one who made that promise quickly disappears as soon as he gets the money.

In the above instances, coercion and deception have the same result: to get a person's money with zero benefit to that person. And that is how climate alarmism and racket works. Scare the people that the world will soon end unless they will act on the programs and projects that were identified by the scaremongers. And this include giving lots of donation and contributions to the scaremongers and alarmist groups. Or various governments and the UN will give them lots of tax money for their various Earth-saving projects.

Using more electricity is not a crime, was never and will never be a crime, as long as the user will pay the cost of such service. Why is having more street lights, having more lights inside the house so that the kids can study or play more, having more lights in buildings and malls so that people can work or meet their friends more even late at night, a practice that people should be guilty of? Simply because they are using power sources that are non-cronies of the WWF and Greenpeace like tax subsidy-hungry solar and wind farms?

Finally, I am posting below an exchange in my facebook wall yesterday. Readers can click the attached papers for further reading.

So tomorrow and each night, open up all your lights when needed. Do not feel guilty that you are enjoying one of humanity's greatest invention -- electricity from various sources. The world is not ending soon. The planet has survived 4.6 billion years of various cycles, it has its own regulator, but the biggest regulator of our planet's climate and its natural cycle of warming-cooling-warming-cooling is 93 million miles away -- the Sun.
-----------