The Department of Health, along with WHO, officially recognizes the increasing risks of non-communicable diseases (NCDs) and since many of these are directly or indirectly caused by smoking, it is naturally expected to support proposed legislations raising the taxes on tobacco. I also think that very few people in this country ever oppose such move. I support it myself 100 percent. I think the debate is limited only on the level and rate of increase that should be taken.

DOH Sec. Enrique Ona made a presentation at the House of Representatives' Committee on Ways and Means last February 21, 2012, about the proposed hike in tobacco taxes. Below are his slides.

Upper right: as societies develop, death from infectious diseases decline while death from lifestyle-related and NCDs increase. There is clear recognition that people's unhealthy lifestyle increases the risk factors for NCDs. I have no question with these data and observations. 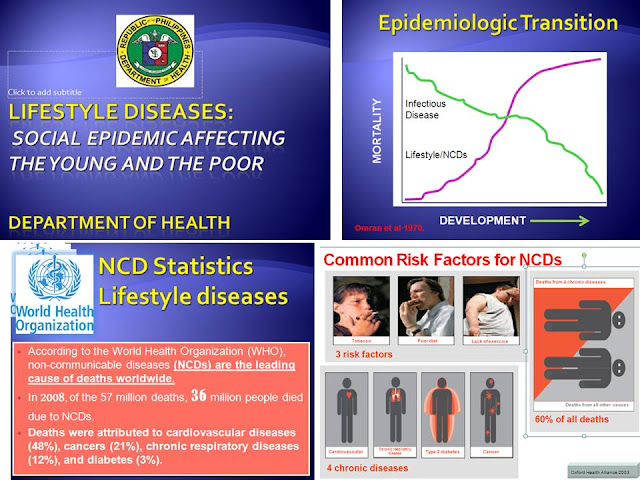 Below, incidence of death due to NCDs is the same in South East Asia including the Philippines, as that of the global average -- around 60 percent of total deaths. I have no question with these data except this observation: "tobacco use, unhealthy diet and physical inactivity... Disadvantaged sector is most affected." 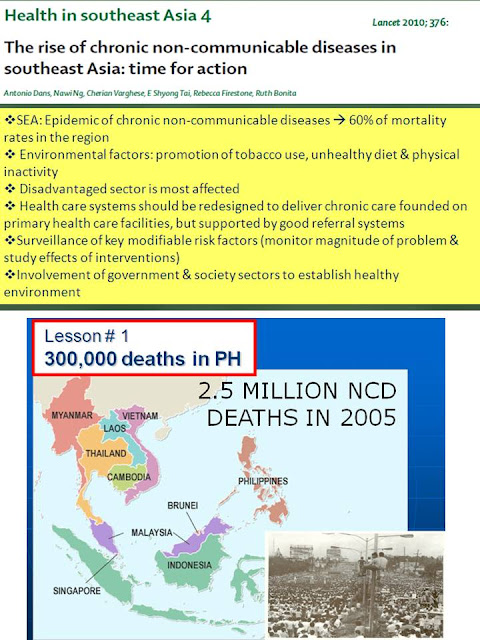 Now look at bottom right slide: "Lifestyle related disease is not a disease of affluence... One reason for greater death rates in the poor is that the poor smoke much more than the rich." I think there is a contradiction here. The poor are victims of NCDs because they smoke more than the rich, so why are they victims? Did anyone put a gun on the heads of the poor telling them to smoke one or two packs a day or more, otherwise they will suffer physical beating, or their heads will be blown away? I'm sure there is none. 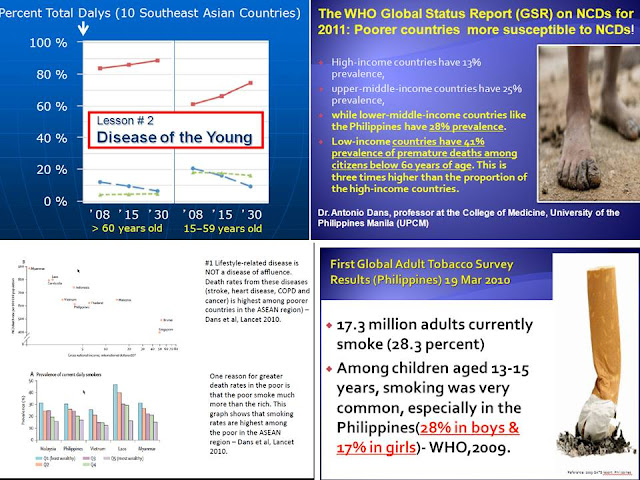 My main critique of such analysis is that it acquits the poor of having more personal responsibility in running their own lives. If they smoke more, if they drink more, if they eat more fatty food than vegetables and fruits, and so on, they are victims of some "external forces" and hence, government must bail them out from such irresponsibility.

If government will say to the people, "Don't worry much being irresponsible to your body, when you get sick, I will take care of you", then we will have more smokers, more gamblers, more fat people.

Below, the poor have little or no access to prevention due to their low education. Is this an acceptable reason or alibi to acquit people of being irresponsible about their body? Maybe, but maybe not.

Now look at bottom right slide: DOH budget is P40 billion, but smoking related expenditures is 10x that at P400 billion. If the problem is this big, then perhaps raising the tax on cigarettes is not the answer, but outright banning of cigarettes, to close down all tobacco manufacturing plants, to disallow the planting of tobacco, etc. 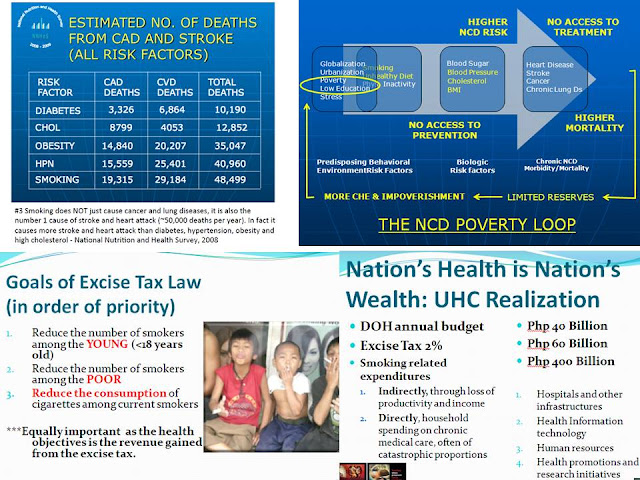 The DOH is aware that outright banning of smoking is impossible to implement. If the demand is there regardless of the prohibitions by the government, then supply will find its way towards the consumers. Thus, certain leeway must be allowed for people to smoke. It's their own lives. Like people who do risky sports (rock climbing, cliff jumping, race car/motorcycle drivers, etc.)

Below, a study done in 1999 estimating that tobacco-related expenses and loss of productivity from 4 out of 40 smoking-related diseases, was P46.4 billion a year. That was a big amount then. 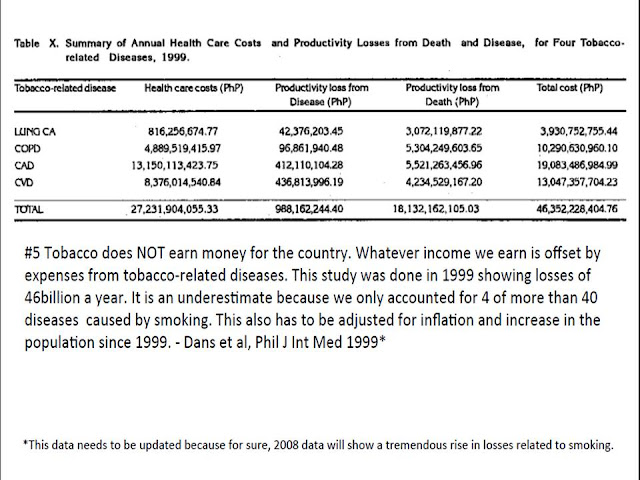 A study on tobacco control program in Thailand. 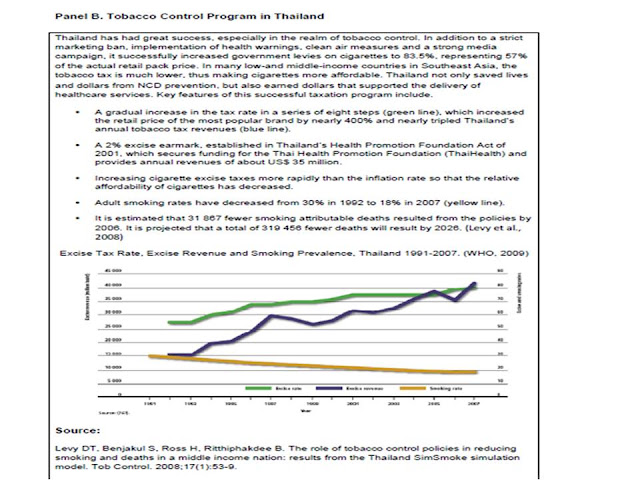 Table below shows that Philippine cigarette taxes are not exactly low or "among the lowest in the region. Of the 9 S.E. Asian economies, Philippine taxes are 4th highest. 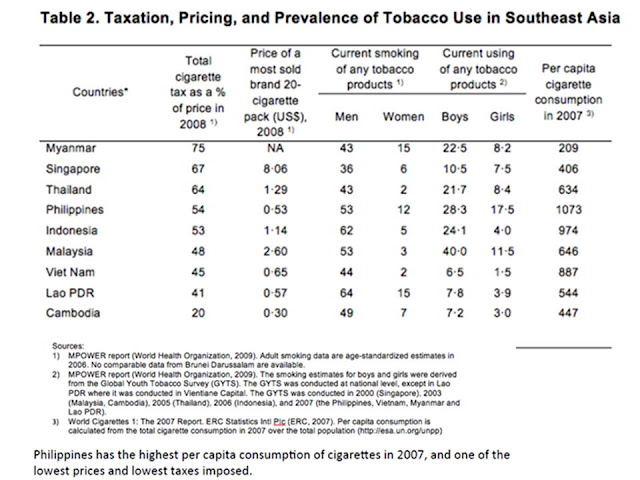 Again, I reiterate my support to a hike in tobacco taxes in the country. If a 1,000 to 10,000 percent increase can be fully implemented and cigarette smuggling can be fully stopped and controlled, I will support that move then. Being a non-smoker ever since, I have no love affair with cigarette or cigar. But I think the probability that the government can fully control cigarette smuggling is as high as the probability of an average Grade schooler passing an exam on partial and differential calculus.  Thus, higher tax rates can only mean higher incidence of smuggling. 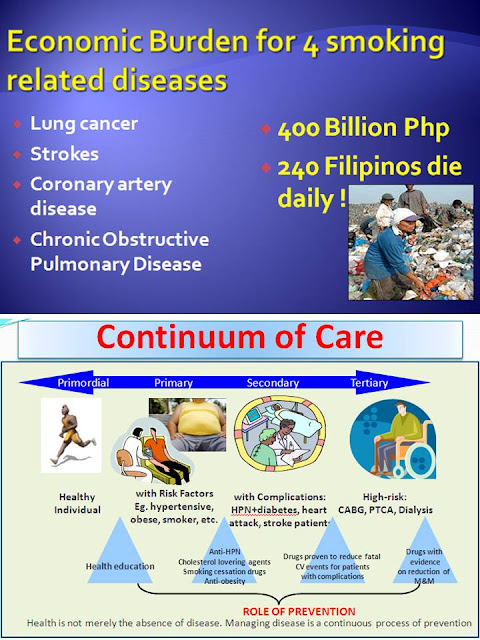 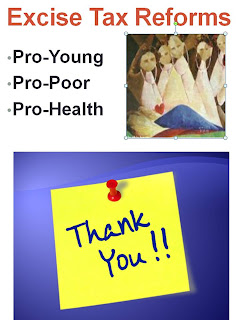 Many smokers will not be comparing Philippine tobacco prices vs. Singapore or Malaysia prices. Rather, they willl be comparing cigarette prices before and after the tax hike.

I wish the DOH and other groups and individuals pushing for tobacco tax hike, to be successful in this campaign. I also support a unitary or single tax rate to apply to all cigarette products. But more than government intervention via higher taxation to reduce smoking incidence, it is more important to remind people over and over again, that healthcare is first and foremost their own personal responsibility, not government's, especially for lifestyle-related diseases. Thus, the need for the government to step back in subsidizing personal irresponsibility via higher budget for NCDs. Infectious diseases and pediatric diseases remain dangerous that claim many young lives until now. That's where the bulk of our tax money for health should go.