On IPR Abolition 13: Protecting Bright Ideas from Mediocre Ones

Below is my article today in the online magazine,  http://www.thelobbyist.biz/perspectives/less-gorvernment/1282-ipr-exclusivity-and-innovation.
The photos are not part of the original article though, I just added them here.
--------- 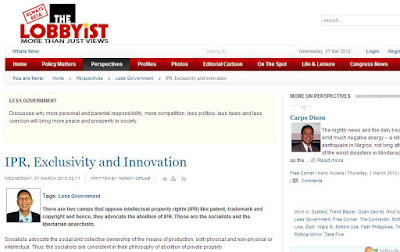 There are two camps that oppose intellectual property rights (IPR) like patent, trademark and copyright and hence, they advocate the abolition of IPR. These are the socialists and the libertarian anarchists.

Socialists advocate the social and collective ownership of the means of production, both physical and non-physical or intellectual. Thus, the socialists are consistent in their philosophy of abolition of private property.

The libertarian anarchists support protection of private property rights for physical properties (house, car, cellphone, etc.) but not intellectual property for two reasons: (a) ideas are not scarce, one can use an idea without excluding other people from using it too, unlike a physical good like a cellphone, and (b) more power is given to the state to enforce IPR.

I consider myself a libertarian, someone believing in the primacy of individual liberty over collective or national liberty and forced equality. But unlike the anarchists, I consider myself a miniarchist (believes in small or minimal government). I have debated with some socialists in the past and it is relatively easy to demolish their arguments of abolishing private property.

My debate with the lib anarchists on IPR is long-running, and I was earlier surprised that they are the more staunch and more articulate IPR abolitionists than the socialists. Here are my quick answers to their two concerns. 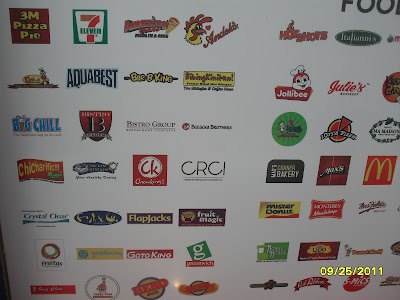 Not all Ideas are the same. Not all people, not all dogs, not all cars, are the same. Mediocre if not stupid ideas are not scarce, they are everywhere; but bright ideas are. Mediocre ideas do not need protection because there is abundant supply in the planet, almost anyone can produce them. Bright ideas, like a good song composition, a good and attractive business logo, a revolutionary disease-killer medicine, need protection to distinguish them from mediocre ideas.

Enforcement of private property rights need not come from the government. Banks, shops, malls, residential villages, have their own private security agencies that enforce their rules against stealing and other criminal acts. They do not need the state police or barangay tanod to do that. Private enforcement of private property right is possible and is happening, including private enforcement of IPR via industry associations. A federation of artists, singers and composers can hire private security forces to swoop down on shops that sell pirated songs and movies. A federation of pharmaceutical companies can hire private security groups to locate and confiscate counterfeit and fake drugs from certain pharmacies. So the paranoid opposition to IPR simply because the state will enforce it holds no water. 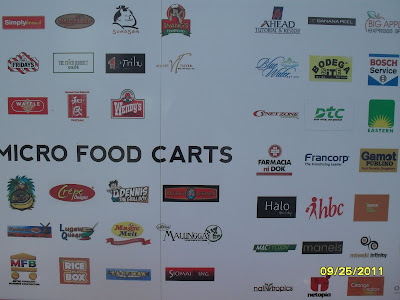 On spoofs of known brands like Jollibee, Mcdo, Starbucks, Coke, Chowking, etc., I don’t think there is anything wrong with that. People poke and make fun of known politicians, sports and showbiz superstars, known business leaders. It is part of human nature to be happy and have fun somewhere sometime.

While it is easy to spoof and copy, it is hard to develop a brand that will be liked by so many people for so many years. If trademark is abolished, one can put up a food shop with lousy or expired food and use a Mcdo or Jolibee wrapper and make lots of money from it because many people will buy. When some customers get food poisoning, who do they sue and be made accountable -- the real Mcdo, the trademark theft, or the IPR abolitionists? 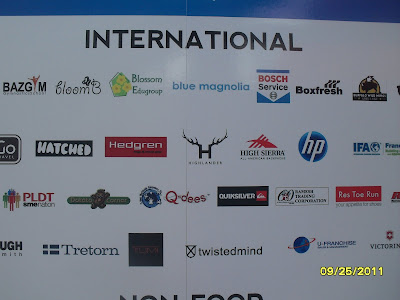 If there were no copyright in songs, perhaps Eraserheads, Parokya ni Edgar, Bamboo or Kamikaze would become famous and rich by simply singing "Hey Jude" or “Heaven” or “Sultans of Swing” in the same tune, just Filipino translation. But because of exclusivity and copyright, these Filipino rock bands invented their own songs, totally different from what the Beatles, Bryan Adams, U2, Dire Straits, etc sang. And these Filipino bands got rich and famous with their original songs.

On medicine invention, if 10 innovator pharmaceutical companies have successfully invented a new drug each against breast cancer, then that's 10 new monopoly drugs competing in the market based on efficacy and price. What's wrong with this? There is no single pharma company that has the monopoly on the new anti-breast cancer drugs, there are 10 of them now. Besides, there were many other pharma companies that have invented a drug for the same disease but their drug patents have already expired. That expands the number of competing drugs from different competing manufacturers for one disease alone.

One friend complained why famous NBA star Jeremy Lin has filed a trademark for “Linsanity” when he did not even invent that word. He followed up, "What if someone filed a trademark on the word ‘the’ or ‘do’ just because they were named THEoDOre or something?"


I think this paranoia is similar to the fear of dance steps or clowning style as patentable, formula in differential calculus as patentable, a chemistry formula as patentable. They are not, there was no “inventive step” involved, these are just products of paranoia and misconceptions on IPR.

I think JLin simply wants the "linsanity" trademarked for him because he and his company plan to roll out various sporting goods and services bearing the trademark soon. If so, then it’s a good business decision because “linsanity” is associated with him and no one else, and only he can endorse it. I also think he won't mind the term being used by anyone in the planet so long as they do not use the trademark and its logo, his face, in huge commercial quantity. 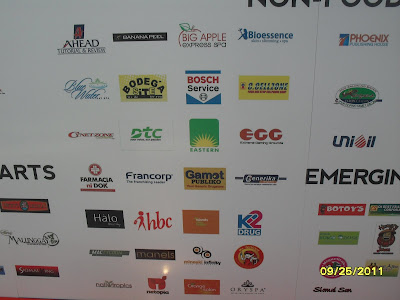 Copyright, patent, trademark, IPR and exclusivity, will force people to become innovative and creative. The copycaters, the lazy and non-innovative who only want to copy or steal someone else's composition and invention and do no original song or logo or medicine but still want to get rich and famous will not be happy with IPR. Why invent the Figaro brand when they can just steal Starbucks or UCC or other famous coffee brands which have been trusted by millions worldwide? Why compose "Harana" or "Ligaya" or “Tatsulok” when they can just sing and record "Hey Jude" or "With or Without You" and do concerts as if they also composed them? Why spend xx million $ inventing a costly but life saving drug when they can just make counterfeit copies or steal the formula and say "We also invented it" then sell it? Why be innovative if people can just copy or steal?

Exclusivity via IPR almost always force people and enterprises to produce their own business trademark, their own copyright and patent for their inventions and composition. People are forced to become creative and innovative in producing their own trademark, working hard to make their mark or brand be known nationwide, if not worldwide.
------