(This is my article yesterday in TV5's news portal,  http://www.interaksyon.com/article/27514/fat-free-economics-unemployment-good-and-bad-news) 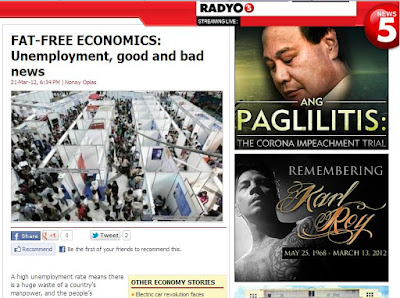 A high unemployment rate means there is a huge waste of a country’s manpower, and the people’s productivity and economic potential are not maximized. High unemployment also indicates high poverty incidence.

One, the labor force participation rate (LFPR) has increased from 63.7 percent in 2011 to 64.3 percent this year. This means more people are entering the labor force, and there are fewer people bumming around or pursuing further studies, thinking, "I cannot find a job anyway, why go out and bother.”

A high LFPR means people are more hopeful and more adventurous, saying, "I will go out and find a job, I might be rejected but I might find one."

The second piece of good news is that both unemployment and underemployment rates have declined this year. The underemployed are those who have work already – whether full time or part time – but are still looking for additional work, mainly to augment existing income.

Now this seldom happens. Usually, unemployment and/or underemployment rate declines because LFPR has declined too. So when the labor force surveyors come to randomly ask people if they have work or no work, some respondents would say “No, I have no work and I am not looking for one.”

The combined unemployment and underemployment rates last year was 26.8 percent and only 26.0 percent this year. Still a high figure but nonetheless a year-on-year decline.

So with two counts of good news on the most recent labor force data, do we say hooray for the current administration?

Not too fast guys. There are two pieces of bad news that can douse cold water on any exaggerated claim on the performance of the Philippines economy.

One is that we are now experiencing a decline in the number of people who are entering the labor force.

The second not-so-good-news is that compared to many industrialized and industrializing economies in Asia, ours is among the highest unemployment rates in the region.

Our neighboring economies in East Asia have unemployment rates of only 0.4 to 4.6 percent. There are two important challenges for the Philippine government to reduce this rather bad situation.

One is to drastically reduce the red tape and business taxes and fees that adversely affect entrepreneurship. Putting up a bakeshop or food shop, a parlor or barbershop, an internet or photocopying shop, is not a criminal act and hence, should not be subjected to red tape and taxes.

Second point is that the playing field should be as fair and level as possible, and not changeable midstream.

While employment and job creation is mainly a function of how dynamic and innovative the private enterprises and the entrepreneurs are, government policies and regulations play a big role.

In short, a fat-free economic policy to address this problem is to drastically reduce red tape and business taxes, not increase them.
~~~~~~~

Here are two tables that were not included in the original article due to space limitations:

This is a very beautiful and interesting research
The most educating one i have read today!