One of the key themes of anthropogenic global warming (AGW) or "man-made warming" or later revised to "man-made climate change", is that more human emission of carbon dioxide (CO2) via fossil fuel burning, more coal power plants, etc., results in more warming. suggesting a high climate sensitivity. Such sensitivity is reflected in the cloud formation in the atmosphere, saying that more CO2 results in less clouds and hence, more solar energy penetration on the planet's air, land and sea surfaces.

Dr. Roy Spencer (www.drroyspencer.com) made a good illustration about this in his presentation during the 2nd International Conference on Climate Change (2nd ICCC) in NYC in March 2009 that I was able to attend.  This is how the feedback theory works. 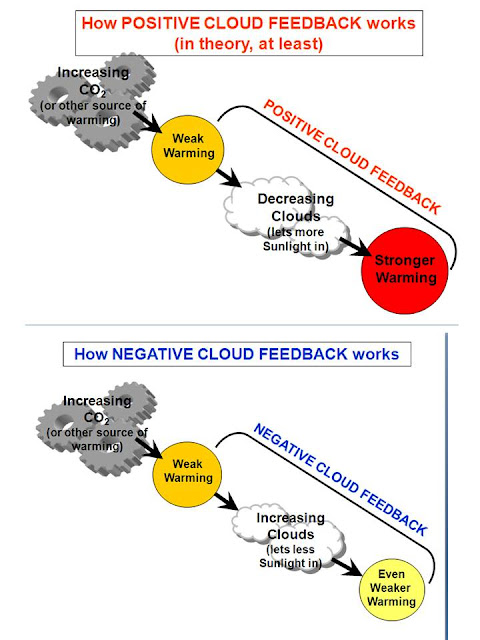 Now, here is the data summarized in a chart/illustration, still part of Dr. Spencer's presentation. Should be mind-boggling for those who believe that only human factors, not natural factors, can influence the planet's climate. 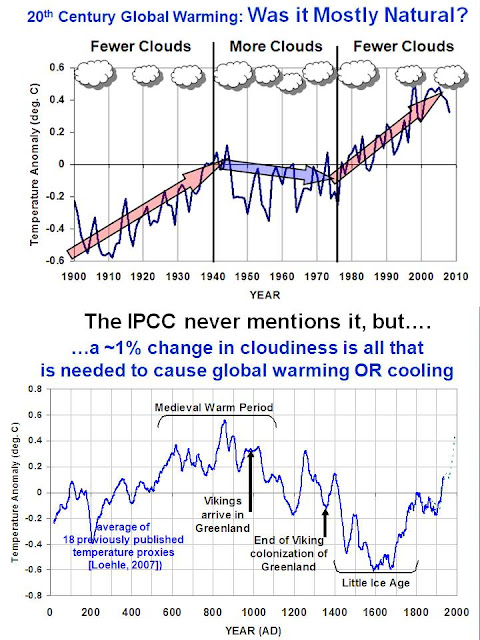 The ILLUSION of Positive Feedback (aka a “sensitive” climate system)

The CLAIM that only CO2 can Explain Global Warming

Ouch, that hurts! At least to believers of "only human activities cause global warming".

Now, there is this interesting article about this subject in WUWT:

Posted on February 9, 2012 by Anthony Watts
Guest post by Dr. Pat Michaels – reposted (with permission) from World Climate Report
A new paper just published in Geophysical Research Letters by Roger Davies and Mathew Molloy of the University of Auckland finds that over the past decade the global average effective cloud height has declined and that “If sustained, such a decrease would indicate a significant measure of negative cloud feedback to global warming.”
Davies and Molloy are quick to point out that part of the decline from 2000 to 2010 in cloud height is due to the timing and variability of El Niño/La Niña events over the same period, however, there still seems to be evidence that at least part of the decline may remain even when El Niño/La Niña variability is accounted for.
Figure 1 (below) shows the history of the effective cloud height, as determined by Davies and Molloy from satellite observations, from March 2000 through February 2010.


The dotted line is the linear trend through the data as determined by Davies and Molloy and has a value of -44 meters per decade (+/- 22m). However, clearly the trend is influenced by the large negative departure centered around the beginning of 2008 that was related to a moderate La Niña event in the Pacific Ocean. To avoid the influence of the this event, Davies and Molloy calculate the difference between the cloud heights during the first and last years of their record and still find a decline of 31 m/dec (+/- 11m). Although this latter technique doesn’t fully account for the El Niño/La Niña signal in the record, it does at least give some indication of the influence of the large negative departures in the latter half of the record, and indicates that the overall decline is not simply an artifact of a single event.
The average global cloud height is linked to the average global temperature—generally, the higher the average cloud height, the higher the average surface temperature, and vice versa. The tie-in is related to the height in the atmosphere from which clouds radiate long-wave radiation to space. The higher up they are, the cooler they are, and thus the less radiation they lose to space, which means the surface stays warmer.
Davies and Molloy calculate that on a decadal basis, the radiative forcing from increasing greenhouse gases is the same as that caused by either a decrease in the total global cloud amount of ~0.3% (which would allow more short wave radiation from the sun to hit the earth’s surface) or an increase in the global average cloud height of ~19 meters (about 62 feet). All to say, that clouds play a major role in the earth’s climate and that small changes in cloud characteristics can add to (via positive feedbacks) or offset (via negative feedbacks) the warming pressure put on the climate from increasing greenhouse gases. A point well-recognized by Davies and Molloy when they write “Changes in cloud properties in response to rising surface temperatures represent some of the strongest, yet least understood, feedback processes in the climate system. “...
---------
Read more about that paper in the above link, plus the nearly 100 comments. Another related article is that written by Pierre Gosselin of NTZ,

The Greens Against The Sun – Vahrenholt And Lüning Rebut Warmists’ Absurdities

By P Gosselin on 18. März 2012
It’s been 6 weeks since Professor Fritz Vahrenholt’s and Dr. Sebastian Lüning’s bestselling skeptic book ”Die kalte Sonne” was released. The Greens have been attacking the book – but their arguments have been astonishingly weak. Some Greens wrote a paper listing their arguments against the book.

The chart that’s driving the Greens nuts.
Vahrenholt and Lüning have since posted here a list of the most common arguments and their rebuttals (which I have paraphrased) as follows:
1. Fritz Vahrenholt used old and already refuted claims.
Rebuttal: “Die kalte Sonne“ bases its arguments on hundreds of publications from renowned scientists. There’s a wide range of scientific opinions. A number of scientists whose opinions deviate from the IPCC have stopped participating in the IPCC due to the frustration of being constantly ignored. The selection of material assessed by the IPCC is incomplete. Natural climate factors and processes have not been taken into account by the IPCC and are not included in their models. Therefore the IPCC does not in any way represent a consensus. The claims made by Die kalte Sonne have not been refuted. Just the missing warming of the last 12 years should tell anyone that something is amiss, and that natural processes have to be at work.
2. The scientific data and facts leave no room to doubt the accelerating man-made climate change.
No one doubts that man plays a role in climate change and out book projects a warming of about 1°C by the year 2100, caused by CO2. The issue is not black or white, but rather how gray? The greens ignore the complexity of the climate system..
3. All scientific measurements clearly show that climate change is happening faster than before.
Rebuttal: Wrong. How the Greens reach that statement is a mystery. Global temperatures have not risen in 12 years. Not one single IPCC model predicted that. How can climate change progress faster than expected when temperatures have failed to rise, contrary to projections?
4. 2010 was one of the hottest measured years – equal to the record year of 2005 (as to the Goddard Institute).
Rebuttal: 2010 is also part of the temperature plateau of the last decade. The fact remains: no warming in over 10 years. The Greens cherry-picked the year 2010, which happens to be an El Nino year (see p. 98-101 in “Die kalte Sonne”). You can plot temperatures yourself at Woodfortrees.org. Or you can refer to authors such asKaufmann et al (2011) or Prof. Ottmar Edenhofer of Potsdam Institute for Climate Impact Research (PIK), or even climate scientist and warmist Prof. Jochem Marotzke confirmed the same in interviews with the taz (9 February 2012) and Spiegel (27 February 2012; p. 113).
5. In 2010 the Earth’s surface, both land and sea, was 0.74° Celsius warmer than the average.
Rebuttal: True, but what does that prove? Warm temperatures are normal as we find ourselves in the Modern Warm Period, which is for the most part a positive phase of a millennial cycle. Temperatures were just as warm, if not warmer, 1000 years ago. The two phases are separated by the natural cold phase known as the Little Ice Age (LIA) 400 years ago. What baseline do the Greens use? Do they use the zero-line of the natural millennial cycle? It is widely known that the warming since the end of the Little Ice Age in 1850 has been about 0.8°C. As a measure of solar activity, the solar magnetic field has more than doubled since the end of the LIA. And because of the well documented geological sun-climate coupling over the last 10,000 years, it is clearly visible that a significant part of the observed recent warming is due to the increased solar activity (see  ZEIT).
6. The measured mean temperatures are at the upper limit of the worst scenarios provided by the IPCC in 2007.
Rebuttal: Wrong, (see chart that follows).

7. That CO2 and other climate gases are in large part responsible for the climate change is scientifically without doubt.
Rebuttal: CO2 is certainly responsible for a part of the warming since 1850. But what do the Greens understand from “in large part“? Would that also include 50/50, i.e. half due to man, just as Mojib Latif recently stated in an interview with Austrian dailyDie Presse? We also assume such an estimate for the development of the climate until 2100. The climate debate is all about how much each factor individually contributes. A 50/50 weighting of anthropogenic and natural climate drivers is also assumed by Prof. Nicola Scafetta of Duke University (see pages 135 “Die kalte Sonne“) and Prof. Nir Shaviv (see pages 86)....
------
Meanwhile, there will be a big conference, err talk, next week, here in Manila about climate, featuring some of the biggest warming leaders in the country. It is organized by the Friedrich Naumann Foundation for Freedom (FNF, Philippine Office). See the program below. I think it's a by-invitation only and not directly open to the public, otherwise the event is posted in the FNF website.

It's mainly a unilateral talk by warmists since all the speakers are AGW believers and proponents, and they will consume about one and a half hours of talk, leaving only 15 minutes for Q&A. And since about 2/3 of any Q&A on average are consumed by the speakers themselves, then any contrary opinion can only be accommodated in just 5 minutes at most. So it's not exactly a "conference."

Disclosure: I'm a good friend of the FNF, I participate in many of its activities. Neric Acosta is also a good friend of mine, I've emailed him before about my non-belief in many of the things that he says about the climate, but I keep a civil, friendly relationship with him.

Finally, the World Wildlife Fund (WWF) Earth Hour lunacy campaign is fast approaching, in less than two weeks. The WWF is among the biggest beneficiaries of climate stupidity and rackets. For instance, you withraw money from any BDO (the biggest bank in the Philippines), there is a button asking, "Donate to WWF?". You purchase a ticket from the biggest airline in the country, there is a button asking "Donate to WWF" to offset your "carbon footprints". Before, you just walk innocently in Ayala avenue, or in any big malls, you will be stopped and harassed by any WWF "volunteers" asking you to donate to them via credit card in order to "help save the planet". In addition, they get big funding from some big corporations, also from the UN and other governments.

In short, the WWF, along with Greenpeace, Oxfam and other big NGOs, are saying, "We have scared you enough about man-made warming/climate change. Now send us more money."

If the WWF will protest the above statements, then it should be a good opportunity for them to face in a public debate. My experience so far is that these guys are all cowards when challenged to a debate. They always say, "it's a settled science", the "skeptics are paid by big oil", or other ad-hominem attacks. The usual attitude of "shoot the messenger, now the message." It's a convenient and evasive way than admitting that they are indeed cowards to face critical and contrary opinions.
--------