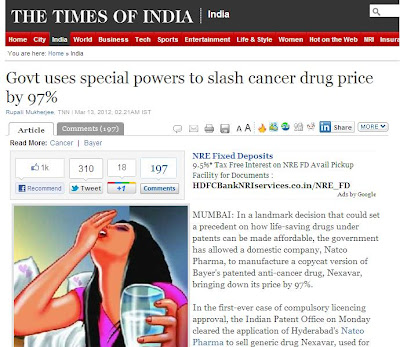 There was a news report yesterday in India on how the government issued a compulsory licensing (CL) on an anti-cancer drug Nexavar, stilll under patent until 2020 by Bayer.

The report was posted in the facebook wall of a friend, Atty. Chito Gascon, a leading official of the Liberal Party (LP), the political party currently in power in the Philippines, and also an UnderSecretary at the Office of Political Affairs (OPA), Office of the President. Chito applauded the move by the Indian government, saying that it was an "interesting! political will to make life-saving medicine accessible to the poor!".

I made a comment in his wall with the following arguments.

CL and IPR-busting policies are wrong. Right now, there are no vaccines against dengue. People are dying by the hundreds each year in the Philippines alone. People are wanting to get an effective vaccine against that disease, they need a hero somehow. Generic producers do not and cannot produce innovator drugs and vaccines. In a year or two, about two innovator companies will roll out such vaccine against dengue. The politics of envy may take charge, some people will push for issuance of CL to make "life saving medicine accessible to the poor!" And the innovator company will soon be seen as "evil, blood-hungry capitalist pharma company" which should not be entitled to make high profit from its high risk, high cost R&D work against dengue.


Intellectual property rights are far more problematic than property rights over things. the main difference is that only one person can use a piece of land or a car, but products of innovation can be used by an infinite number. Restricting their use is justified only on pragmatic grounds, to reward investment in innovation. But this right is less absolute than real property rights, and when public health considerations are serious, as it seems in this case, the artificial monopoly bestowed by patent law has to give way

I thanked my friend for his comments. This drug molecule, its generic name is "sorafenib", its brand name is "nexavar", is a tangible product. A molecule is not visible under a naked eye but visible under a microscope. Hence, it is a tangible product, it is a physical property, although its chemical formula, an idea, is intangible. Now, not all ideas are the same, the same way that not all people, not all cars, not all laptops, not all dogs, are the same.

Mediocre ideas are non-scarce, they are bountiful, there is huge supply around the planet, they do not need protection because they are mediocre if not idiotic. Bright ideas, however, are scarce. Like a new and more powerful, more disease-killer drug. Any idiot can say that he has invented a new drug against dengue or prostate cancer but when asked to show the effectiveness and safety of his drug in a scientific and rigorous way, he cannot do so. That is an example of a mediocre idea and it does not need protection. A bright idea though, like a powerful drug molecule, needs protection because there is huge costs, hundreds of millions of $ for just one successful molecule (an innovator company can also spend hundreds of millions of $ for a failed molecule).

Now people can say that such bright idea should not be protected as well, that the politics of envy has precedence over private property rights because public health is involved. But it was concern for public health precisely that motivated an innovator company to spend huge amount of resources to research and develop a new medicine and treatment, something that other companies did not do, only to be dishonored after a successful invention, and to me this is not fair.


Valid points Noy. One of the effects might be that it will discourage innovator companies. This is clearly a complex issue that requires more thinking. We need to design a regime that protects and rewards innovation while making sure that the people's access to said innovative medicines is also not severely restricted.

I think the innovator companies are discouraged mainly in some poorer countries that do not know how to respect the rule of law, the law on private property rights. In rich countries like the US, Europe, Japan, HK, etc., all the new and innovator drugs are available. Expensive, true, but at least available. And expensive only temporarily; once the patent expires, they become cheap. In poorer countries, attempt to make them cheap via politics and government coercion result in supposedly cheap but non-available new medicines and vaccines.

Another option for patients is not to buy any of those new medicines because of their higher price, and use older medicines that are already off-patent, developed and marketed by many generic manufacturers. Either way, the patients and the public will benefit, even if government is out of the picture here.

The issuance of CL, special CL, exhaustion of rights (aka parallel importation), early working and related schemes and changes in the Intellectual Property Code (IPC) of the country is the "heart" of the Cheaper Medicines Law of 2008 (RA 9502). Institutionalizing drug price control is part of the law but it is only a secondary provision there. So while issuance of CL for some patented medicines and vaccines, especially anti-cancer drugs (there are about 200 different types of cancer, based on a wikipedia list that I saw) is a possibility, the good thing is that CL has never been invoked and tried here. What was mostly used here was exhaustion of rights, then drug price control.

Back to the old and recurring question: What is the role of government? Especially in healthcare.

For useful products and services, government should set clear and transparent rules that apply to all players, then it should  step back, allow more private players to come in and compete with each other, watch that players abide by the rules.

For dangerous products and services, like fake, counterfeit, and/or substandard medicines, government should come in quick because these products will surely put the lives of patients to risks. Getting and penalizing these people and companies is an important role for the government.


MUMBAI: In a landmark decision that could set a precedent on how life-saving drugs under patents can be made affordable, the government has allowed a domestic company, Natco Pharma, to manufacture a copycat version of Bayer's patented anti-cancer drug, Nexavar, bringing down its price by 97%.

In the first-ever case of compulsory licencing approval, the Indian Patent Office on Monday cleared the application of Hyderabad's Natco Pharma to sell generic drug Nexavar, used for renal and liver cancer, at Rs 8,880 (around $175) for a 120-capsule pack for a month's therapy. Bayer offers it for over Rs 2.8 lakh (roughly $5,500) per 120 capsule. The order provides hope for patients who cannot afford these drugs.

The approval paves the way for the launch of Natco's drug in the market, a company official told TOI, adding that it will pay a 6% royalty on net sales every quarter to Bayer. The licence will be valid till such time the drug's patent is valid, i.e. 2020. As per the CL (compulsory licence) order, Natco is also committed to donating free supplies of the medicines to 600 patients each year.

Bayer said it was "disappointed" and would "evaluate options to defend intellectual property rights" in the country. In July 2011, Natco had applied for the CL in the Mumbai patent office to make Sorafenib Tosylate for which Bayer has a patent in the country since 2008.

Under Section 84, a compulsory licence to manufacture a drug can be issued after three years of the grant of patent on the product, which is not available at an affordable price. Under the World Trade Organisation TRIPS Agreement, compulsory licences are legally-recognized means to overcome barriers in accessing affordable medicines. This is the first time in the history of the Indian Patents Act, 1970, that the provision under Section 84 has been invoked.

The patent office acted on the basis that not only had Bayer failed to price the drug at a level that made it accessible and affordable, it also was unable to ensure that the medicine was available in sufficient quantities within India. Controller general of patents, P H Kurian, based his decision on Bayer's admission that only 2% of kidney and liver cancer patients were able to access the drug, and its pricing (Rs 2.8 lakh for a month) did not constitute a "reasonably affordable" price.

Since 2005, domestic drug manufacturers have faced formidable barriers in the manufacture of patented drugs, and this has been remedied by the compulsory licensing provision to prevent patent holders from having a monopoly over certain essential medicines.

Interestingly, generic manufacturer Cipla has already launched generic Nexavar (Sorafenib Tosylate) at around Rs 28,000 per 120-capsule pack, and is embroiled in a dispute with Bayer in the Delhi high court.

Economist and intellectual property expert James Love said, "The Bayer price of Rs 34,11,898 per year ($69,000) is more than 41 times the projected average per capita income for India in 2012, shattering any measure of affordability. Bayer tried to justify its high price by making claims of high R&D costs, but refused to provide any details of its actual outlays on the research for Sorafenib, a cancer drug that was partly subsidized by the US Orphan Drug tax credit, and jointly developed with Onyx Pharmaceuticals. Bayer has made billions from Sorafenib, and made little effort to sell the product in India where its price is far beyond the means of all but a few persons."

Dr Tido von Schoen-Angerer, director of independent healthcare organization, MSF, said, "We have been following this case closely because newer drugs to treat HIV are patented in India, and as a result are priced out of reach. But this decision marks a precedent that offers hope. It shows that new drugs under patent can also be produced by generic makers at a fraction of the price, while royalties are paid to the patent holder. This compensates patent holders while at the same time ensuring that competition can bring down prices."
--------

I would like to thank for creating this interesting blog and i think most of the peoples are getting good knowledge from here get more about anticancer. Anticancer Manufacturer in India

Thank you for sharing. The blog is very informative. Companies are coming up with new discoveries and innovations on medicines. Hence, a great deal of support has been provided by the Government. Hope future advancements may lead to successful elimination of diseases.
"Anti Cancer Capsule Manufacturer"