To continue propagating climate alarmism, end-of-the-world-unless-you-follow-us doomsday scenario, alarmists use several tricks. Here are some of them.

Two, not factoring in natural factors that can affect the planet's climate and weather, like the Sun, galactic cosmic rays (GCRs), water vapor and clouds, volcanoes and geological degassing, other natural greenhouse gases (GHGs), the oceans and multi-decadal oscillations. It's all caused by more human CO2 emissions.

Three, trumpeting "ocean acidification", "rising sea level", "extreme storms/typhoons", etc. without showing enough graphs and data, and as if there were no super-strong storms and typhoons in the past.

Four, not taking the global data and satellite pictures of Arctic and Antarctica ice, just take photos of  broken icebergs and show these as "proof" of ever-melting polar ice towards "ice-free Arctic/Antarctica" in the next few years.

There are many other tricks, dozens of them, used by the alarmists to further advance their end goal: more UN and country governments' environmental regulations, carbon and energy taxation, more subsidies to crony power sources, more or expanded climate bureaucracies, more global climate meetings and junkets.

I am posting below four articles and data sets that debunk those four tricks by the alarmists. This is a bit long, so you may get your favorite snacks while reading :-)
----------

The global average lower tropospheric temperature anomaly cooled a little more in February, 2012, again not unexpected for the current La Nina conditions in the tropical Pacific Ocean (click on the image for the full-size version): 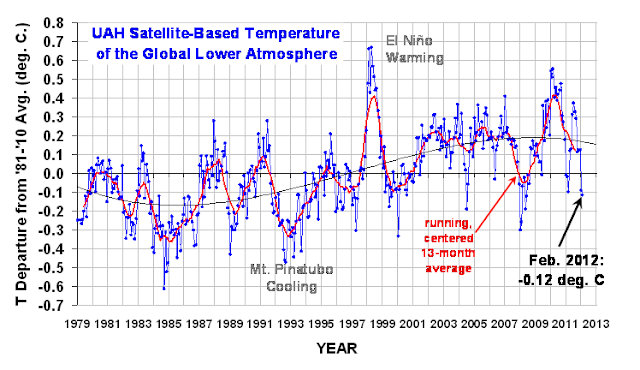 The 3rd order polynomial fit to the data (courtesy of Excel) is for entertainment purposes only, and should not be construed as having any predictive value whatsoever.

Here are the monthly stats: 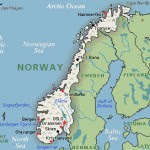 Fritz Vahrenholt’s and Sebastian Lüning’s Die kalte Sonne website brings up another study that shows the sun plays a significant role in climate development.
How many more of these are we going to need? I don’t know why there are still people out there who deny what ought to be obvious.
==============================

New Norwegian studies: A significant part of climate warming of the last 150 years is caused by the sun
By Sebastian Lüning and Fritz Vahrenholt (translated by P Gosselin with permission)
Three Norwegian scientists, led by astrophysicist Jan-Erik Solheim of Oslo, have taken a close look at the interaction between the temperature development on Earth and solar activity in the past. The scientists investigated the length of individual Schwabe solar sunspot cycles since 1850 until today and found a systematic correlation with the annual mean temperature of the subsequent cycle.
Here the scientists analyzed temperature data from Norway, Spitzbergen and other North European weather stations. Normally a sunspot cycle is about 11 years on average. If the cycle is longer, then it is a sign for a solar activity slumber. Solheim and his colleagues Kjell Stordahl and Ole Humlum have now been able to determine that the temperature lowered after a long and weak solar cycle. The temperature rose accordingly after a short and intense cycle. This points to a time delay of about 1 decade between the heat impact of the sun and the climatic reaction on Earth.

The length of individual Schwabe sunspot cycles correlates well with the annual mean temperature of the subsequent cycle (see diagram middle right). Example Tromsoe, from Solheim et al. (2011a).
Because the last Solar Cycle No. 23 was significantly longer (see p. 299-302, “Die kalte Sonne”) and by looking at the empirically obtained interrelation, the scientists expect an imminent cooling at Spitzbergen of several degrees Celsius (Solheim et al. 2011b). On a Norwegian and global scale, that could translate to up to 1°C (Solheim et al. 2011a, 2012). Moreover, using their correlation data, the Norwegian scientists estimate that about half of the warming since 1850 was caused by the sun.
In a parallel study, the Norwegian trio investigated the temperature history of the last 4000 years using the Greenland GISP ice core. Here the scientists found a characteristic temperature cycle with a period of about 1000 years. In the Greenland temperature curve it is plain to see the Minoic Warm Phase (3000 years ago), the Roman Warm Phase (2000 years ago), and the Medieval Warm Phase (1000 years ago) and today’s Modern Warm Phase. Cold periods occurred between these warm phases, with temperatures dropping more than 1°C. According to Humlum et al. (2011) the logical continuation of this natural cycle indicates that a large part of the 20th century warming is due to natural climate mechanisms (assumed to be foremost the sun).
Cited publications:

Climate Change Impacts In The USA are Already (NOT) Happening

Posted on March 8, 2012 by Anthony Watts
by Craig Loehle, Ph.D.
Many government reports by NASA, NOAA, EPA, USFWS, USFS, USDA and other agencies mention that climate change impacts are already observable in the USA. This is discussed in the context of endangered species conservation, forest resource assessment, future water availability, disaster planning, agriculture policy, etc. I have read many of these reports, which often refer back to the IPCC or the US Global Change Research Program. But they are usually vague on details of what bad things are expected to happen, generally referring to increases in extreme events. Nevertheless, these vague bad things are being used to guide policy.
The USA has some of the best data and is a large country. Are bad effects of climate change really visible already? In what follows, I address the evidence often put forward to support these claims and compare these to the literature. The true story is far from alarming.
Ocean Acidification
One government draft report indicated that ocean pH has decreased (become more acid) by 0.1 units, and that this represents a 30% increase in acidity since 1750. Because pH is a log scale, estimating percent increases in acidity is problematic and a change of 0.1 units could not represent a 30% change in acidity as stated. A serious issue not addressed by the report is that a global time series of pH data for the oceans does not exist. Thus, the provenance of the 0.1 unit change in value is dubious, and the confidence intervals on such an estimate would no doubt be large. Furthermore, daily, seasonal, and between year pH fluctuations at any given location are on the order of ±0.3 pH units or more (Middelboe and Hansen 2007; Pelejero et al. 2005).
Sea Level Rise
Some reports state that sea level rise poses a threat to United States natural habitats, with other reports focusing on risks to developed areas. According to the Intergovernmental Panel on Climate Change (IPCC) temperatures due to human activity began to rise after 1980, but estimates of sea level show a rise from about 1870 (earliest records) at a nearly linear rate and with no sign of acceleration. Sea level rise from 1870 to 1980 is not likely due to human activity. One report indicates that IPCC has projected a sea level rise of 0.4 to 2 m by 2090, but the fourth IPCC report does not make such a claim, instead giving a best estimate of 0.28 to 0.43 m. Recent levels of rise (http://sealevel.colorado.edu), at 3.1 mm/year long-term trend or 0.31 m in 100 years with no indication of “acceleration,” are only consistent with the lowest IPCC projections. In fact, recent deceleration of the rate of rise (Houston and Dean 2011) has been detected. Examples of papers that projected sea level increases lower than the range discussed in the fourth IPCC report are Bouwer (2011), Chu et al. (2010), Czymzik et al. (2010), and Xie et al. (2010)....

Temperature Increases
Governement assessment reports note that US temperatures have risen 2°F since 1961. However, conclusions about the extent of temperature increase depend heavily upon the start date for the calculation. Perhaps by coincidence, a start date of 1961 gives the most alarming rise. In contrast, there is almost no rise from 1938 to 2011 in the US. The same is true for sea surface temperature changes. This is because natural climate oscillations (e.g., Wyatt et al. 2011) produced a warm period in the mid-twentieth century with a cool period in the 1960s.
Floods
Reports assert that floods are increasing, but data do not bear this out. Hirsh and Ryberg (2011) showed that there is no trend toward increasing flood magnitudes in any region of the US, and a small decrease in the Southwest. Arrigoni et al. (2010) showed that climate change in the northern Rocky Mountains over 59 years has not significantly affected basin flows, although human habitat modifications have reduced the difference between minimum and maximum flows. Kundezewicz et al. (2005), in a global analysis of 195 long series of daily flow records, rejected the hypothesis of a growth in maximum daily flows. Increasing trends in flood damage can be fully accounted for by rising population and wealth.... 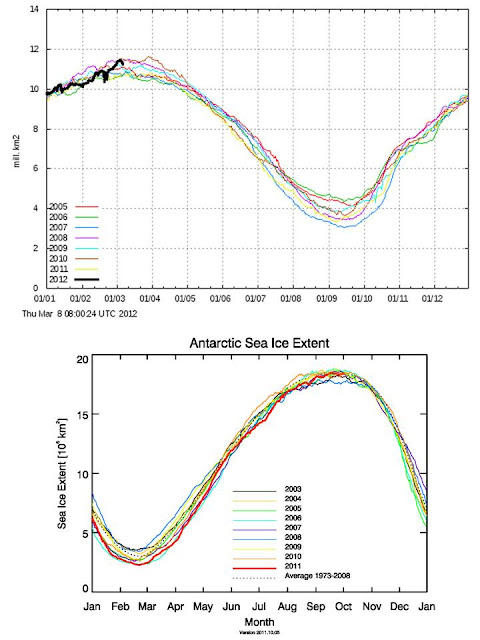 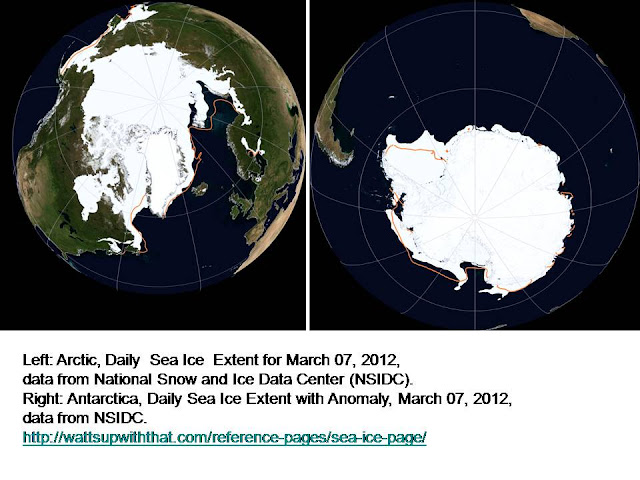 Nothing so alarming or near-end-of-the-world situation in both the northern and southern hemispheres' ice level.

Posted on March 8, 2012 by Steven Goddard
Experts at NASA and the Naval Postgraduate School tell us that Arctic Sea ice may be gone this summer or next. Farewell ice – we hardly knew ye.

In the end, it will just melt away quite suddenly
- Professor Peter Wadhams of Cambridge University

NASA climate scientist Jay Zwally said: “At this rate, the Arctic Ocean could be nearly ice-free at the end of summer by 2012, much faster than previous predictions.”
http://news.nationalgeographic.com/
“Our projection of 2013 for the removal of ice in summer is not accounting for the last two minima, in 2005 and 2007,” the researcher from the Naval Postgraduate School, Monterey, California, explained to the BBC.
“So given that fact, you can argue that may be our projection of 2013 is already too conservative.”
BBC NEWS | Science/Nature | Arctic summers ice-free ‘by 2013′

On another note, I've had several recent exchanges in facebook about the climate. Here are some of them.

The strongest solar storm since 2003 is hitting our planet. Find out why planes are being rerouted and what other effects are predicted.
-------