(Note: This is my article today, and my second paper in TV5's news portal) 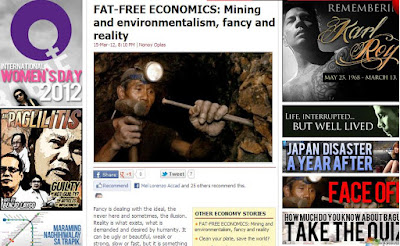 Fancy is dealing with the ideal, the never here and sometimes, the illusion. Reality is what exists, what is demanded and desired by humanity. It can be ugly or beautiful, weak or strong, slow or fast, but it is something that we have to start with. In short, fancy is full of fat, reality is lean and fat-free.

Mining is often pictured as ugly and destructive, so the fanciful thought is to stop all forms of mining, or at least all large-scale operations especially involving multinational companies, whether permanently or temporarily, a moratorium on mining.

This fancy is illusory and non-realistic. No mining, no modern life. No mining, no steel and cement, no glasses and minerals, no cars and buses, no cellular phones and computers, no electrical wires and cables, no TV and air-con, no malls and buildings, no tricycles and tractors. Steel, cement, copper, nails, etc. all come from mining, not from farming or fishing, not from politics or government. A typical cellphone is made up of cobalt, silver, gold and palladium - all are mineral products. Even a barong-barong or bahay kubo will require nails, hammer, saw or bolo/itak - all from mining.

Environmentalism for the environment’s sake with no regard for human needs is unrealistic and impractical. If we pursue environmentalism to the extreme and have zero mining as a public policy, then people should go back and live in caves. No need for nails or knives, no need for electricity and the web, no Facebook and YouTube. Are people, whether living in urban or rural areas, willing to backtrack to prehistoric lifestyles? I doubt it.

If it is possible to do mining via underground tunnels, it should be good and cool. The problem is that it will make mining and mineral products costlier, and people will complain. They want their computers and cellphones, their TV and refrigerators, their motorcycles, cars and tractors, their construction materials and electricity rates, to be cheap and affordable.

There is a trade-off to everything. It is only a question of how much trade-off one can take and tolerate. Zero mining is one option, but people will have to go back living in caves and use not even nails or steel for their roofs.

Some friends posted in their Facebook wall a harrowing picture of open pit mining. It was actually a mining site in Mexico, not the Philippines, but still generated a lot of anti-mining backlash and anger. The caption said, “BEHOLD THE OPEN PIT MINE where there used to be forest.”

I commented that the whole of Metro Manila used to be all forest. The beautiful rice terraces and vegetable terraces in the Cordilleras used to be all forest. All the sugarcane and banana farms, all rice and corn farms, all industrial and residential villages, used to be all forest. When those trees were killed and uprooted to clear the land for those agricultural, residential and commercial purposes, there was not much outcry. That is because people understand the reality of human needs for a place to live, play and work. When it comes to mining though, they protest the uprooting of trees and land clearing, much more the digging and quarrying of soil and earth materials.

There are indeed notorious and highly irresponsible mining going around, both large- and small-scale. I am in favor of corporate, transparent and publicly-listed mining firms that are run by professional and well-trained geologists, mining engineers and business administrators. This sets for more accountable and corporate responsibility. But note again, that even the most responsible mining firms and practices will still cause damage to the environment. The same way that the beautiful rice terraces, highways and expressways, wide airports and "green villages" were made possible only by uprooting millions of trees to clear the land for agricultural, industrial and other non-forest purposes.

I have a friend who used to be an officer in a mining company in Central Luzon. Mining firms deal not only with the DENR, BIR, SEC, etc. They also deal with the local governments at the provincial, city/municipal and barangay levels. Here comes Mayor Y demanding X million pesos before he will grant the business permit to the company. The firm said okay, they can provide that amount in kind -- public school buildings, a hospital, public market, public housing, the company will shoulder these for their employees and staff. The Mayor said no, the X million pesos is only for himself.

The mining firm said, how can they justify such a huge expense to stockholders, no receipt for expenses. I do not know how they dealt with that mayor, and if the municipal councilors squeezed the company dry. The mining firm cannot start operations unless it gets the approval of the municipal council and a mayor's permit, even if they had secured all the permits and approvasl from the DENR and other national government agencies.

It is important to remove the fat and fancy in social and environmental policies in order to craft more realistic and workable schemes for the people who need jobs, and for people who need various products and gadgets for their livelihood and modest living, things that can only be derived and extracted from mining.

Let all regulations, restrictions and taxation that apply to big mining companies apply also to micro, small and medium scale mining. That is the essence of the rule of law; that the law applies to all, no exception. The laws and regulations on taxes and environmental conservation apply equally to unequal people.