Pol. Ideology 27: Why do Many Intellectuals Oppose Capitalism?

I have written two short papers in the past on this question, "Why do Many Intellectuals Oppose Capitalism?" I will post them here first before jotting my current thoughts on the subject.

My former Prof. in UP about 26 years ago, basic philosophy subject, also a friend in facebook, Dr. Zosimo Lee, posted in his wall status that some academic leaders are shallow and mediocre.

I also notice that, a number of academics have shallow research work, often driven by funding rackets. This reminds me of the article, "why do intellectuals oppose capitalism?" by Robert Nozick. I wrote a discussion paper about it, along with 2 other articles, by Karl Popper and Isabel Paterson. It's available at www.minimalgovernment.net, entitled "Intellectuals, capitalism, self-enslavement and limits to humanitarianism."

Sir Zos Lee noted that while Nozick's concept of the State is interesting, the concept of welfare state is stronger because "market forces alone cannot bring about public good."

I argued that this is not true. If we notice, there is NOT a single government restaurant, govt. carinderia, govt. fastfood chain, govt. supermarket -- and yet people are eating. Compare that in education and healthcare, where there are thousands of govt. schools, govt. hospitals and rural health units, drug price control, govt. health insurance, etc., and problems seem to be expanding. Where there is govt. intervention and heavy regulation, distortions and corruption happen heavily too.

A lady friend of Sir Zos argued that the reason why fastfood chains make big profit is because the Philippine government subsidizes rice imports from a country with strong state, Vietnam. And bottled water, now a commercial commodity.

Her statements are wrong. One, the Philippine government does not subsidize rice imports. It taxes rice imports. Two, I do not suggest totally removing subsidies to public health care, even public education. I believe there is role for govt. health care for pediatric and infectious diseases (malaria, dengue, etc.). Three, the reason why food business survives even with zero govt. resto or govt. carinderia, is capitalist competition. If people think jollibbee meals are expensive, then there are cheap carinderia food alternatives. And four, people have the option to buy bottled water or not, there is zero coercion there, unlike taxes and govt subsidies to favored firms and sectors which are pure coercion.

The lady further argued that the "reason why free markets alone is not enough to bring about a just, fair and FREE society is because enterprises' purpose for being is PROFIT alone. Business will downsize, cut costs, layoff workers, move from pt a to b to c with only one goal in mind: to keep cost down and increase the bottomline."

Yes, profit is good. Facebook will not do this free online networking if it does not make a profit. Mcdo and Chowking and Aling Caringderia won't put up their foodshop if they do not make profit. Because they desire profit, they hire workers, they produce and sell food, they open up their store 24 hrs a day, etc.

The opposite of capitalism and profit motive is socialism. The opposite of deregulation is monopolism and heavy government regulation. Giving politicians and government bureaucrats heavy power to say who can do business and who cannot, and how they should do their business, is inviting abuse and corruption.

Meanwhile, yahoo, google and facebook capitalism are among the best things that capitalism and capitalist competition has brought to mankind.

One, intellectuals expect that they are the most highly valued people in society, they expect they are entitled to great rewards. But a capitalist society does not honor its intellectuals this way, not distribution "to each according to his merit or value." The market distributes to those who satisfy the perceived market-expressed demands of others, and intellectuals resent this.

Two, the schools impressed upon the intellectuals that they are better than the rest, so they deserve higher rewards and entitlement based on intellectual merit. The wider market society, however, taught a different lesson. 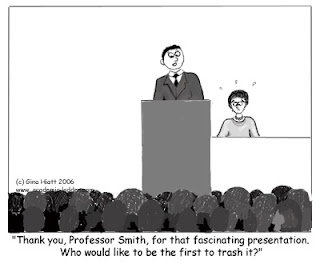 Three, there is central authority by the teachers who distribute the relevant rewards, in contrast to decentralized and spontaneous distribution of rewards by peers and schoolmates in the schoolyards outside the classroom. Those successful by the norms of a school system resent a society which does not grant the same success.

Four, the school system imparts and rewards only some skills relevant to later
success so its reward system will differ from that of the wider society. Some, in
moving to the wider society, will experience downward social mobility and its attendant consequences.

It's a good philosophical and sociological analysis of the wordsmith intellectuals around the world. It is also not difficult to find proof that most of such intellectuals indeed hate unbridled, laissez faire capitalism. The guys who populate the UN and the various foreign aid and/or multilateral bodies like the IMF, WB, WTO, ADB, OECD, etc., those with PhDs, MS, etc., favor different types of government regulations, intervention and taxation of capitalism and the capitalist enterprises.

So perhaps it has something to do with vested or personal interests of many wordsmith intellectuals, to disallow laissez faire type of capitalism to prosper. There are a dozen justifications and alibi to cite why capitalism should be over-regulated by governments: "save the poor", "save the world economy", "save the planet", etc.

By granting themselves and the political class lots of perks and huge tax-free earnings, as well as the political force and coercion to regulate anything and everything that they wish to regulate, it does not serve the vested interests of many intellectuals to allow real free market economy to prosper and blossom.
(3) March 01, 2012
Capitalism and the free market economy leads to a rather weird situation of "spontaneous order". Spontaneity of action by the various players and actors in society -- consumers and producers, buyers and sellers, entrepreneurs and workers, industrious and the lazy, men and women, young and old -- and absence of a huge and monster body that does central planning for the rest of society makes the market creative and innovative. Business Innovation and creativity compel people to be on their toes all the time, to avoid complacency and mediocrity.


The guys next door or in a nearby city are going to produce a new gadget, a new appliance, a new seed variety, a new software, etc., that will revolutionize existing technologies and processes, and the public's attention will move towards them. In each process and stage of innovation, some upheaval and disorder is created as the corporate status quo is always challenged if not changed and overhauled.


Such spontaneity creates its own social and economic order. People are used to seeing or hearing new products, new services, new crops, new songs, new books, being introduced to them. If they don't see such, they seek them somewhere else. The search for something new, something more useful, more efficient, more life-saving, more job-creating, that's the social order that spontaneity and stiff capitalist competition provides.
Planners and bleeding heart activists who dislike inequality and economic upheavals hate this. That is why they enter government (local and national, executive-legislative-judiciary) and inter-governmental or multilateral institutions. Various forms of regulations, restrictions and taxation were invented to limit and reduce more spontaneity, more diversity and more social inequality.


The anti-spontaneity, anti-competitive capitalism forces are not limited to government bodies alone. They are also often found in most civil society organizations (CSOs) like NGOs, people's organizations (POs) and associations, and mainstream media. The academe and universities, both government and private, especially in the colleges or departments of social sciences, communications, economics and law, are more often than not, the nests of this type of intellectuals.


I am not saying that they are "anti-intellectual", they are not. Since their main business is the production and reproduction of ideas, then they can be considered as part of the "intellectual class."


My beef is that the kind of ideas that they advocate and propagate -- to restrict more business spontaneity and social diversity, to force and coerce homogeneity and uniformity in society, to have social engineering and forcibly redistribute income and assets to have more social equality -- ultimately leads to restriction of individual freedom.


The collective, the nation, as administered, centrally planned and heavily regulated by the government and its multilateral partners, must have precedence over the individual. Thus, an individual's income cannot be his and his alone. The collective and the nation through the government, must confiscate a portion of it, usually from 15 to 50 percent. Whatever is left of the after-tax income, those that are set aside for household consumption or savings or investments, the collective via the government must get additional tax and fees. All to "ensure" social harmony and uniformity.

Where coercion has become the rule rather than the exception, most of the stated social and economic goals to promote social and economic equality, to expand rights and entitlements, are often missed and violated, if not in the short-term, over the long-term.


We need to develop a new type of intellectual class that will continuously challenge the dominant and mainstream type outlined above. More than the generalized goals of "good governance", "anti-corruption", "social accountability" and related concepts that will further justify big and expansive governments and coercion, we need to push forward the idea that respecting individual freedom -- like the freedom to be industrious or lazy, the freedom to be responsible or irresponsible -- is an end in itself, subject to limitations that such freedom should not be used to harm other people. One can be rich, be very very rich, via entrepreneurship and innovation, not via robbery and stealing, whether in the private or government sector.
---------
See also:
Pol, Ideology 24: Democratism and Coercion, December 16, 2011
Pol. Ideology 25: On Governance and Rule of Law, February 20, 2012
Pol. Ideology 26: Socialists in a Liberal Government, February 21, 2012
Posted by Bienvenido Oplas Jr at 11:50 AM

This site is excellent and so is how the subject matter was explained. I also like some of the comments too.Waiting for next post.
paroxetine

Thanks for this read mate. Well, this is my first visit to your blog! But I admire the precious time and effort you put into it, especially into interesting articles you share here!