This is my article yesterday in the online magazine, http://www.thelobbyist.biz/perspectives/less-gorvernment/1285-personal-irresponsibility-and-government 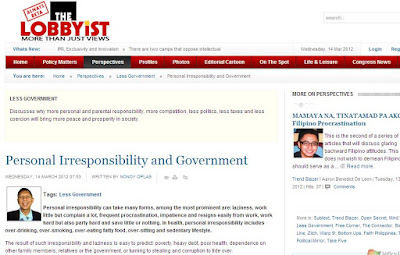 Personal irresponsibility can take many forms, among the most prominent are: laziness, work little but complain a lot, frequent procrastination, impatience and resigns easily from work, work hard but also party hard and save little or nothing. In health, personal irresponsibility includes over-drinking, over-smoking, over-eating fatty food, over-sitting and sedentary lifestyle.

The result of such irresponsibility and laziness is easy to predict: poverty, heavy debt, poor health, dependence on other family members, relatives or the government, or turning to stealing and corruption to tide over.

In my previous articles here, I have repeatedly argued that poverty in most cases, is self-inflicted. Sure, people can become poor if a super-strong typhoon and flood, or a powerful earthquake or volcanic eruption, or a huge fire or freak accident, will wipe out the various properties and investments accumulated through years of hard work and savings. But for such nature-caused poverty, getting up and starting all over again is relatively easy for people who ve the culture and ethics of hard working and high ambition to improve their lives and that of their households.

When governments, the various foreign aid bodies and multilateral agencies (UN, WB, ADB, OECD, etc.) talk about “fighting poverty” or “eradicating poverty” and dream of a “poverty-free world”, they normally do not ask what are the major factors, like internal and personal factors, that contribute to poverty.. And if one will review their literatures about poverty or “sustainable inclusive growth” and related concepts, find terms like “personal responsibility”, one will be dismayed and disappointed.

Those governments and foreign aid bodies talk about lack of access to: credit, modern farming methods, good quality seeds, efficient irrigation, post-harvest technology, poor infrastructure, quality healthcare and nutrition, affordable housing, high child and maternal mortality, and so on. Almost all factors are external to the individual and hence, all the interventions, welfare and subsidies, are external to the individual.

Governments can give subsidized credit or hand tractors or irrigation pumps to farmers. Then some of the farmer-beneficiaries will use the money or the agri machines as collateral to borrow money, and use it to a child’s wedding or birthday party, or go to a cockpit house (sabungan) or a beerhouse and have a grand time. The next day, the money is gone or there is little left. Then governments will find another round of subsidies if not freebies to “fight rural poverty”.

Personally, I can cite many persons – from some of my relatives, friends, neighbors, friends of friends, etc. – whose excuses for their poverty or lack of economic mobility are plentier than their actual effort at overcoming poverty. Rice farmers who complain of expensive prices of vegetables but do not want to plant vegetables in their idle plot or in non-rice planting dry season. Douoble-degree college graduates who have no work or do not want to work. College students whose parents are either sickly or have no work, but do not want to become working students and just depend on some relatives for their daily expenses. People with stable full time work but have almost zero savings as their monthly pay are severely eroded by paying debts due to over-partying or gambling or other vices.

The expansion of personal irresponsibility jibes in step and positive correlation with the expansion in government fiscal irresponsibility. Politicians and government officials are more than happy to pamper the lazy and the irresponsible because there is poverty. And more poverty is more reason to justify more or higher taxes and fees, more regulations and restrictions, more social and economic central planning, more loans and debts to “fight poverty.”

Building a prosperous and peaceful society starts from developing self-reliant and hard-working people, not from pampering lazy and irresponsible people.
--------

Update:
I posted my article in my facebook wall, and it attracted some good discussions and exchanges, below.