(Note: this is my article today in the online magazine, http://www.thelobbyist.biz/perspectives/less-gorvernment/1288-freedom-responsibility-and-freedom-barometer) 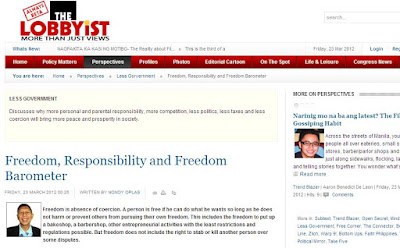 Freedom is absence of coercion. A person is free if he can do what he wants so long as he does not harm or prevent others from pursuing their own freedom. This includes the freedom to put up a bakeshop, a barbershop, other entrepreneurial activities with the least restrictions and regulations possible. But freedom does not include the right to stab or kill another person over some disputes.

Coercion is a matter of degree. A child is not free to watch tv all he likes if the parents will limit his exposure to tv. A person is not free to get somebody else’s property without the consent of the other person on a voluntary exchange contract, like someone buying a product or service.

Most coercion are unjustified, like the various coercion imposed by governments: taxes, fees, fines, regulations and other prohibitions. Trade protectionism for instance prohibits the citizens from buying certain goods made abroad at the cheapest price possible because government has imposed tariff, import and related taxes that make those imported products become expensive. Entrepreneurship is hindered when various levels of government offices, from local to national, will impose many different permits with their corresponding fees and taxes.

To estimate how much freedom people enjoy in different countries, certain studies and indexes on economic freedom, press freedom, political freedom are done by various groups and think tanks around the world.

In Asia, a new index was developed by the Friedrich Naumann Foundation for Freedom (FNF) called the Freedom Barometer (http://freedombarometer.org/). The index they devised is composed of three factors and these are their sub-components:

1. Political Freedom: (a) Free and fair elections, (b) Absence of unconstitutional veto players, and (c) Press freedom.
2. Rule of Law: (a) Independence of the Judiciary, (b) Corruption, and (c) Protection of human rights.
3. Economic Freedom: (a) Security of property rights, (b) Size of Government – expenditures, taxes and enterprises, (c) Regulation of credit, labor and business, and (d) Freedom to trade internationally.

More freedom means higher score (0 to 100). A government in one country may give more economic freedom to the citizens, say they put up any shop any day and anywhere with the minimum restrictions and regulations, but people have limited political freedom, they cannot publicly criticize or blog negative things about the government.

A composite score is then derived to get the degree of freedom that people in a particular country in Asia. And here is the result for 2011: 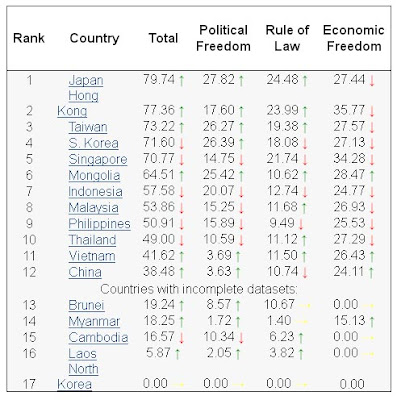 The Philippines ranked 9th out of the 12 Asian countries surveyed with complete datasets in 2011. The same rank was also obtained by the Philippines In the 2010 Freedom Barometer, The high incidence of media people who have been murdered – most especially during the “Maguindanao massacre” – gave us a low score in press freedom. The high degree of corruption in the country, from the Executive to Legislative to Judiciary, also gave us low score in the Rule of Law category.

There is a big challenge for the Philippine government, especially under a liberal administration – the only Liberal government in Asia actually – to improve these poor performance.

It is good that the FNF has taken this initiative to remind Asian governments hat more and more eyes and minds are looking at them, watching their current policies and programs if they promote more political and economic freedom, if they respect and promulgate the rule of, or not.

But more than expecting governments to reform by themselves and let go of certain unnecessary restrictions and coercion, it is the citizens’ obligation, it is individual responsibility, to guard whatever freedom they have from being stolen and deprived by their governments. And to reclaim and take back previous freedom which have been hijacked and taken away from them in previous laws and regulations.