Environmental activists claim that the planet is going into a deepening death spiral with more and more people either killed or displaced by natural disasters that occur around the world.

The method and counting of deaths and displacement, however, is deceptive.

Whether flood or drought, torrential rain or foul weather, these are all counted as “proof” of the “deteriorating situation of the global environment.”

Another approach is to get the ratio of casualties over X number of people. I found one piece of data that precisely answers the question, “Are there more deaths and displacement in the world today compared to 40, 50, or 100 years ago?” 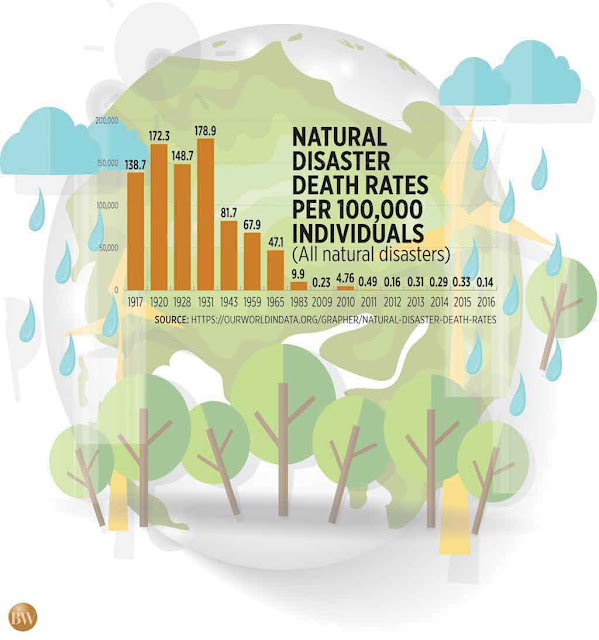 Based on the chart above, the answer to the question is no.

Assuming that the frequency of strong storms or of an El Niño is rising now compared to hundreds or thousands of years ago, the number of casualties have declined because (1) people now live and work inside stronger structures, and (2) better preparations have been made, thanks to modern forecasting models and communications technology.

Mining in particular is often blamed for big landslides and soil or mountain erosions.

To further control irresponsible mining, non-environmental regulations have been tightened further to squeeze mining companies to become “responsible” to the communities.

And the Duterte government’s tax reform program has raised the mining excise tax from 2% to 4% of revenues. This excise tax is on top of corporate income tax, VAT, withholding tax, documentary stamp tax, etc.

Perhaps a better option that should have been done was to raise the mining excise tax from 2% to 10%, then abolish some mandatory expenditures and programs, like any or some of these: Annual Environmental Protection & Enhancement Program (EPEP), Social Development and Management Program (SDMP), Community Development program, Environmental Work program (EWP), Safety and health program, and others.

The advantage of this option is that government will collect more money since many people always argue that mining firms don’t pay enough taxes. Then government through the national and local government agencies should do those community projects that mining firms are currently forced and coerced to spend on top of various taxes and fees they pay.

So to prepare the locals from natural disasters like annual flash floods, government should build huge and stable drainage, ensure robust riprap structures on hills and cliffs to control erosion and landslides.

It remains a question of course if government officials and legislators will really do this once they hold the money. After all, giving away freebies and endless subsidies is often seen as more “politically productive” than building long-term infrastructures to communities.
See also:
BWorld 168, Uncertainty in mining policy and the Manicani debate, December 12, 2017
BWorld 169, On tobacco tax and plain packaging, December 12, 2017
BWorld 170, The Habito carbon tax distortion, December 28, 2017
BWorld 171, Global vs national tax reforms, December 29, 2017
Posted by Bienvenido Oplas Jr at 8:28 AM