Today is Jose Rizal Day, a regular holiday in the Philippines to commemorate his death anniversary in December 30, 1896, less than two years before the end of Spanish formal colonization that started around 1560s. He was killed via firing squad at Luneta, Manila. 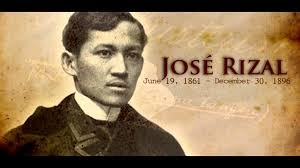 With more than two centuries of generally cruel and bloody colonization by Spain, the Philippines has produced dozens of heroes in many parts of the country, leaders who started early independence movements but were unsuccessful because of the superior arms and merging of church-state affairs by the Spanish colonizers. Jose Rizal was one of those heroes.

Rizal however, was a standout among them because of his brain, his high intellect. He was a writer and book author, a poet, a painter, a physician, an orator, has several other talents. His two books, "El Filibusterismo" and "Noli me Tangere" are classic materials that are still used in elementary and high schools until now in Philippine history subject.

Another thing that distinguished Rizal from majority of Filipino heroes then was that he was a "pacifist" reformer, he did not favor armed confrontation with Spain. He travelled a lot, in Spain and other European countries, he was able to highlight the cruelty of Spanish front line officials in the Philippines and thus, campaigned hard for drastic reforms. Of course the colonizers' cruelty prevailed and he was jailed for several months as the colonizers were searching for the leaders of the spreading armed insurrections against them. Then the final verdict, death by firing squad, 121 years ago.

My friend, famous libertarian Lawrence "Larry" Reed, President of the Foundation for Economic Education (fee.org) in the US, asked me to write about Rizal, to be published in their website. I readily said Yes because Larry is a good friend since 2004 when he was still the President of the Mackinac Center for Public Policy in Midland, Michigan. I attended the Mackinac Leadership Conference, early April that year, a training for aspiring free market leaders.Our batch that year has many participants from Asia -- from HK, Sri Lanka, India, Vietnam, Mongolia, PH of course.

Rizal is famous in fighting for national freedom and independence. I am not familiar, however, if he also wrote a lot about individual freedom and liberty. That is something I have to research.

Jose Rizal, thank you for your bravery and heroism. Other heroes in the PH fight vs Spanish colonization -- Andres Bonifacio, Apolinario Mabini, the Gomburza priests, Diego Silang, Marcelo del Pilar, etc. -- thank you too.