La Nina and flooding in the PH, other countries

After a big El Nino the last two years, La Nina is back this year and it seems to be a bad one, lasting probably for the next two years. In the Philippines' main island of Luzon for instance, regular rainy or wet season is from June to October. This year, it is end-December already and it's been cloudy on most days with occasional scattered rains. 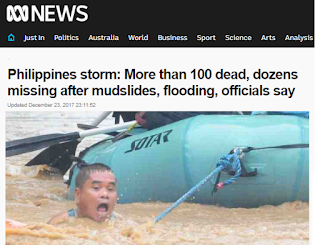 There have been several heavy flooding in the country too until this month that killed dozens of people due to landslides and drowning.

Ok, just what is El Nino - La Nina, how are they measured?

The quick answer is if the sea surface temperature (SST) anomaly or deviation in the Nino region 3.4 -- the center-most and widest part of the 4 Nino regions 1, 2, 3 and 4 in the Pacific Ocean -- is above or warmer than 0.5 C compared to average temperature over the last 30 years I think, that's El Nino. If the SST anomaly is below or colder than -0.5 C, that's La Nina. So if the SST is between -0.5 to +0.5 C, say -0.35 C or 0.48 C, that's the neutral zone, neither El Nino nor La Nina, just developing towards either condition.

So the UN, Al Gore, many governments, are dishonest and deceptive when they say that anthropogenic (or man-made) global warming is "unprecedented" (no precedent) and "unequivocal" (no ambiguity, so sure).

I hope that by 2018 and the coming years, that big fake news by the UN, governments, big activist environmentalists will be exposed.
Posted by Bienvenido Oplas Jr at 7:02 PM