* This is my column in BusinessWorld last December 13.

“The problem is not that the people are taxed too little. The problem is that government spends too much.”
— former US President Ronald Reagan

Until 1980, much of the world’s countries and governments were socialistic in their taxation and spending policies. For instance, the top marginal income tax rates that year were 60% in Malaysia and Thailand, 70% in the Philippines, 75% in Japan, 89% in South Korea, 70-75% in the US, and 83% in UK.

Then the Reagan-Thatcher era in the ’80s changed this, they cut their respective tax rates by half. Both were advocates of limited government and free market as indicated by Reagan’s statement above. He also once described role of many governments as “if it moves, tax it; if it keeps moving, regulate it; if it stops moving, subsidize it.” Ms. Thatcher on the other hand once said that “the problem with socialism is that you eventually run out of other people’s money.”

In the Philippines, former President Cory Aquino and other world leaders in the ’80s also joined to institute drastic income tax cut.

Fast forward today. The Duterte administration initiated drastic personal income tax cut, which is a good thing. The problem is that it also increased taxes elsewhere as it expanded public spending big time. The average increase in the national government budget of the previous administration was around P250-300 billion/year. Dutertenomics easily doubled this level: P670B increase in the first year (from 2016’s P2.68 trillion to 2017’s P3.35 trillion), another P420B increase next year with 2018 budget of P3.77 trillion.

Among the global NGOs that fight high and multiple taxes, big and wasteful public spending, is the World Taxpayers Association (WTA).

Formed in 1998 as Taxpayers Associations International, it was renamed as WTA IN 2000. It has many members from over 60 countries promoting lower tax rates, limited government, and more individual freedom.

The WTA held its regional forum and meeting last week, Dec. 9-10 at Rembrandt Hotel Bangkok, Thailand. I went there and I was the only participant with an institute from ASEAN countries. Other participants were from China, Hong Kong, South Korea, Japan, India, Nepal, Australia, UK, Sweden, US and Canada. Former WTA Sec. Gen. Bjorn Tarras-Wahlberg, current WTA Chairman Troy Lanigan who is also the president of Canadian Taxpayers Foundation (CTF), and current WTA Sec. Gen. Cristina Berechet were there.

Among the biggest members of WTA and represented in the Bangkok meeting are the Korea Taxpayers Association (KTA) with 1.2M dues-paying members, CTF with 117,000+ members, Taxpayers Alliance (UK) with 75,000+ members, others.

The Philippine government seems to be the most tax-hungry among the 10 members of the ASEAN as reflected in the total tax rate (TTR) as % of commercial profit. This is reported by the Price Waterhouse Coopers (PWC) in its “Paying Taxes” annual reports. TTR is the sum of corporate taxes + labor taxes (mandatory contributions for employees’ SSS, health, housing insurance, etc) + other taxes and fees (by other national and local government agencies).

On the country list, I chose members of the proposed Regional Comprehensive Economic Partnership (RCEP), composed of ASEAN 10 countries + 6 regular dialogue partners China, Japan, South Korea, India, Australia, New Zealand; then the two tiger economies in the region, Hong Kong and Taiwan. Also included are the biggest economies in North America (US and Canada) and Europe (Germany and UK). Of the 22 countries covered, only four (indicated by *) have experienced increase or deterioration in TTR (see table). 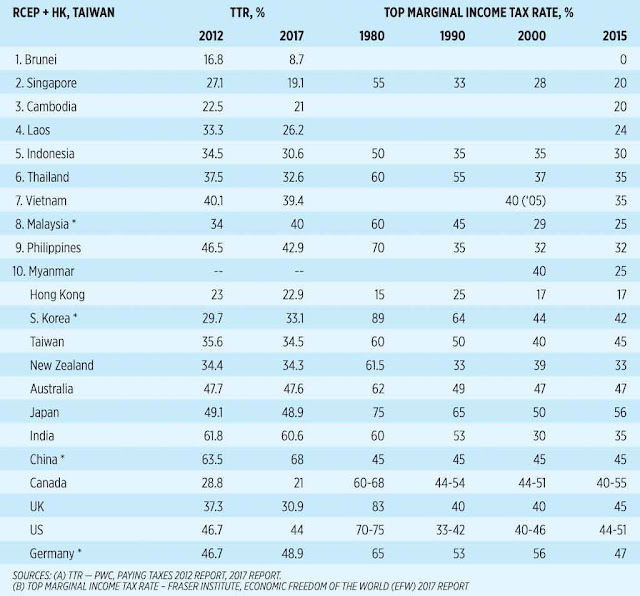 The good news is that over the past five years, many countries and governments have learned to cut their various taxes and fees collected from corporate job creators. The bad news is that after such decrease, the level of TTR remains high.

So can the Duterte TRAIN help remove this dubious image of the Philippines having the most tax-hungry policies in the ASEAN and other neighboring countries?

With new tax hikes affecting the prices of cars, oil, electricity, and sweetened beverages; high VAT affecting many goods and services, the answer seems to be an ugly NO.


Dutertenomics could have improved this situation by cutting the VAT from 12% to 8% or lower with zero exemption except raw agri and fishery products. But Dutertenomics is focused on spend-spend-spend with little regard for the inflationary pressure of its tax-tax-tax policies.
---------------