The recently approved tax reform for acceleration and inclusion (TRAIN) by the Congressional Bicameral Committee exhibits a number of favoritism for some energy products and players while penalizing others. In particular, among the three fossil fuels, only petroleum products and coal received tax hike while natural gas was not mentioned and hence, not taxed.

In the VAT base expansion, expensive, unstable and intermittent renewable energy (RE) like wind-solar is again exempted (see table). 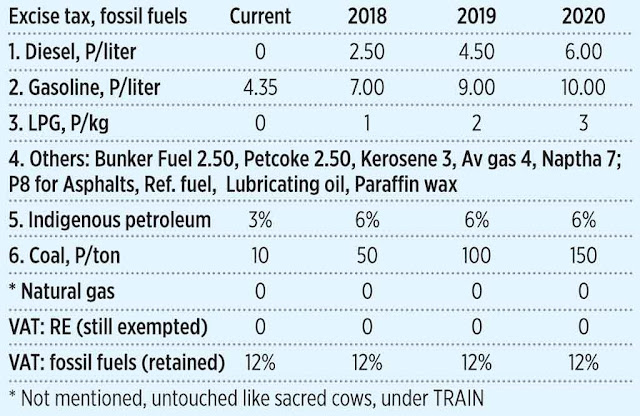 Here are the possible implications:

1. Since petroleum products are a public good, many goods and services will experience price hikes. Not only fares for jeepneys, buses, taxi, boats, and airplanes but also for agricultural products because most farmers now no longer use carabaos in tilling their farms, they use tractors, big and small; more farmers now also do not use human labor for harvesting rice, they use harvest + threshing combiner machines. Fishermen hardly use manual paddle boats, they use motorboats. Traders no longer use animals in transporting cargo, they use trucks.

2. Since coal power contributes 48% of total electricity production nationwide (2016 data) despite having only 34% of total installed power capacity, electricity prices will further go up, slowly but surely. Most apologists of raising coal taxes cite the “minimal impact” on households consuming 200 kWh/month. This may be true but those households work in factories, malls and hotels, schools and universities, hospitals and residential condos, airports and seaports. These establishments consume hundreds or thousands of MWh per month, not kWh of electricity. The additional cost will be passed on to the consumers. 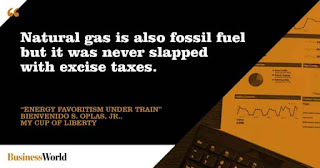 3. Natural gas is also fossil fuel but it was never slapped with excise taxes. The Malampaya gas royalty is a tax on exploitation of a natural resource, the same way that the price of our imported petroleum and coal already include royalties. There is favoritism in exempting natural gas from excise tax. And there are some connections between some legislators and a known economist who pushed for high coal tax but silent on natural gas tax, with a big energy company whose main product is natural gas power generation.

4. Exempting RE from VAT but retaining VAT for fossil fuels. These REs are enjoying favoritism three times. First, this exemption from a high 12% VAT. Second, they are given guaranteed high prices for 20 years via feed-in-tariff (FiT). Third, they are given priority or mandatory dispatch to the grid even if they are expensive. For instance, FiT for solar1 is P10+/kWh, FiT for wind1 is P9+/kWh, average coal price is P4/kWh, can go down to P1.50/kWh on off-demand hours like midnight.

Soon, REs will be given a fourth privilege via the renewable portfolio standards (RPS), or minimum percentage of REs that electric cooperatives (ECs) and private distribution utilities (DUs) must purchase and distribute to households. REs then can price their electricity output high because these ECs and DUs have no choice, they will be penalized if they will not buy those expensive and intermittent REs.

Meanwhile, the DoF is often quoted as saying that “two million richest Filipino families consume 50% of oil products in the country.” This is one of the reasons why they pushed for high tax hike for oil products.

I have been intrigued by that repeated statement since last year and I am wondering what papers or studies justify this?

There are about 25 million Filipino families now. The DoF refers to the richest 2 million families, so the other 23 million middle class and poorer class Filipinos consume the other 50% of oil products.

The DoF is saying then that anytime in EDSA, NLEx, SLEx, roads in Visayas and Mindanao, etc. on average, about 50% of the cars, buses and trucks there transport the two million rich families and their goods? And that about half of domestic flights and the inter-island boat rides transport the richest two million families? This is absurd.


I think the DoF displayed dishonesty and deception in making that claim to further justify the high oil tax hikes. If such DoF claim has indeed objective basis, I am willing to apologize for this remark. For now, that statement is not backed up by solid numbers and hence, deceptive and opportunist.
--------------

See also:
BWorld 166, US energy trading and implications for Asia and Philippines, November 26, 2017