Very often, the purpose of government is to make cheap things become more expensive. It does this via high and multiple taxes, regulatory fees, mandatory contributions, and multiple permits and bureaucracies that raise the cost of compliance. Many governments display hypocrisy when they say that they want to control inflation yet create those multiple taxes and bureaucracies that create inflationary pressure.

In the energy sector, the most recent proposed tax hikes are in the excise tax of oil products of up to P6/liter, and a big jump in excise tax of coal also known as “carbon tax” from the current P10/ton to P300/ton. The original bill by Sen. Sonny Angara proposed a hike from P10 to P20/ton but last week, an amendment by Sen. Joel Villanueva and followed up by Sen. Loren Legarda changed this to P300/ton.

Romeo Bernardo in his BusinessWorld column last Monday “The Gravy TRAIN is leaving and common sense isn’t in it” estimated that “The P300 per metric ton tax on coal will add P0.14 per kWh to our cost of generating electricity. This is on top of… feed-in-tariffs (FiT), a fancy term for what are just subsidies from the taxpayer. Combined, they will add P0.43 per KWh to our electricity bills or, at current consumption levels, a total of P40 billion for 2018.”

That is huge, a big government-instigated expensive electricity measure via legislation. In 2016, coal power constituted only 34% of total installed capacity in the country but contributed 48% of total electricity production. If the distortion created by priority and mandatory dispatch to the grid of solar-wind even if they are expensive (feed-in-tariff or FiT of up to P10+/kWh for solar and P9+/kWh for wind, more than 2x the price of coal and natgas) and intermittent, the share of coal electricity production can easily reach 50%.

The earlier proposal by former NEDA secretary Ciel Habito to impose a carbon tax of P600/ton has something to do with this. It is a lousy proposal yet it emboldened the legislators to make cheap and stable energy from coal become more expensive.

I was wondering about Dr. Habito’s inconsistencies. One, he frequently advocates expensive electricity via high coal and carbon tax with about four articles at the Inquirer since June 2017. Two, no advocacy for high carbon tax of natural gas/LNG which are also fossil fuels. And three, silence in expensive electricity via guaranteed high price for 20 years also known as FiT for wind-solar. To say that the impact of the coal tax on electricity prices will be small is a cavalier attitude on price increases when he’s not the only one paying for it.

Romeo Bernardo has a point when he further wrote in his article, “why single out coal for a carbon tax? Why not a carbon tax on every fuel based on its impact on the ozone layer (which incidentally should also include LNG)?” 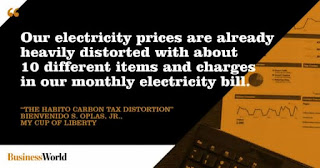 The FiT keeps rising from 4 centavos/kWh in 2015 and now 18 centavos with a pending hike to 29 centavos/kWh late this year. Very likely it will no longer be granted so Transco will likely ask for 32 centavos/kWh or higher early next year. Add 32 centavos subsidy for expensive and intermittent renewables + 14 centavos coal tax and soon we shall have 56 centavos/kWh of unnecessary and distortionary extra cost in expensive electricity.

The continued favoritism of renewables while penalization and demonization of coal and fossil fuels is triggered by continued climate alarmism. Whether we have less rain, no rain or lots of rain; whether we have no flood or lots of flood; whether there are few storms or lots of storms, whatever weather and climate, the alarmism movement suggests that we should pay more expensive electricity, we should send more money to the UN, WB, ADB, CCC, WWF, etc. We should get more climate loans, more renewables loans, and cronyism. It is a lousy movement.

Coal power and fossil fuels are responsible for higher productivity of the poor and cheaper electricity for households and industries. We have a rising life expectancy, rising per capita GDP despite rising population because of the rise in overall human productivity, thanks to coal and fossil fuels.

The House of Representatives should counter the high coal tax proposal of the Habito-inspired Senate bill. The various tax-tax-tax under TRAIN should not add more distortions and inflationary pressure in our daily electricity consumption.