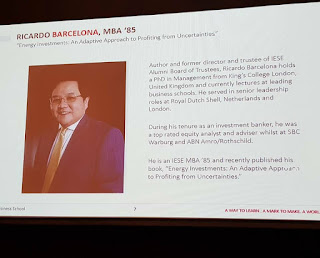 I am reposting an article by a friend, Ricardo "Ric" Barcelona, published in the Inquirer last November 27, 2017. I attended the book launching of Ric's book, “Energy Investment: An Adaptive Approach to Profiting from Uncertainties” last November 22, 2017 at Shangrila Hotel Makati. Good work and congrats again, Ric.
---------------


Why do subsidies often fail?

In writing my new book, I came face to face with three energy investment paradoxes. All trace their roots to generous subsidies.

Counter-intuitively, generous subsidies did not result in wide scale deployment of renewables, more so with solar as subsidies’ poster kid.

Innovation is the second paradox. Advocates argue that as increasing renewables capacity is installed, their costs would fall.

Ironically, when subsidies are too generous, the costs decline more slowly than in markets without subsidies.

The third paradox blasted the notion that growth and profitability go hand in hand.

With solar installation’s “frenzied” growth, albeit from a low base, I struggled to find beneficiaries of this boom that profited financially, much less achieving value-creating returns.

Perhaps, not surprisingly, we come across contradictory reports on renewables’ progress from the business press.

One sunny morning in 2013, leading journalists herald the dawn of renewables’ new era. Solar is sold at a price lower than coal, so the headline says. As analysts scramble to validate their financial models, most could only scratch their heads and were at a loss for answers. The next batch of headlines came to their rescue. Investors and advocates of “competitive” solar power were up in arms. The cause? Governments in Europe cut renewables’ subsidies drastically. Within weeks, “high growth” solar companies filed for bankruptcies, with wind struggling to make ends meet while barely remaining afloat albeit financially moribund.

In The Atlantic’s November 2015 issue, which I quoted William Gates, Microsoft’s founder, provided an answer as to where the problem lies.

By succinctly arguing how costs comparisons become a disservice to the environmental cause, Gates observed: “Photovoltaic solar is not economical. Its intermittency is a major problem. When environmental enthusiasts point to photovoltaic solar as having a similar cost to hydrocarbons, what they mean is that at noon in Arizona that may be the case. However, solar does not come at night. So the fact that at one moment you reach parity, so what? Distinguishing a real solution from a false one is actually very complicated”.

The economic cost of energy equates to their life cycle cost of energy. This is a simple addition of the recovery of its normalized fixed assets costs, variable operating expenses, and fuel costs. Embedded within the fixed costs are its implied return on assets and a depreciation expense, while variable and fuel costs are inflation adjusted, with fuel prices accounting for most of the volatilities. Renewables tend to have stable costs.

Philippine coal-fired power’s economic costs would be about P7.29/kWh, while PV Solar would be about P9.09/kWh. Financial costs based on acquisition prices would be about P3.00/kWh to P4.50/kWh. This compares with PV Solar’s feed-in tariff (FiT) of P8.50/kWh. With PV Solar equipment costs having fallen sharply, its economic cost is below the feed-in tariffs. While the learning curves effects favor PV Solar’s improved costs competitiveness, fuel and power prices from coal-fired and gas-fired power fell from peak of P8.00/kWh to its present levels of P2.00 to P3.00/kWh. The FiT subsidies actually widened to P5.50 to P6.50/kWh, or up to two thirds of revenues.

The lessons are stark. When subsidies are set as the costs differences, the “correct” level is indeterminate. As power prices increase, renewables need lesser subsidies but nevertheless continue to collect. When this happens, consumers would coax regulators to claw back the subsidies because renewables are raking it in at consumers’ expense.

Paradox One: Generous subsidies do not result in wide scale renewables deployment. Highly dependent on subsidies, changing government priorities that cut subsidies turn secure revenues, into the very source of uncertainty that bankrupt the venture.

Learning curves suggest that with each doubling of renewables’ capacity, its costs would decline by about 20 percent. Enthusiasts present this as evidence that success is a fait accompli.

PV Solar exceeded what the theory prescribes. The learning curves, however, could stall or even reverse its decline. For example, US wind turbines costs declined from about $4,500/kW in 1997 to $1,200/kW in 2001. When subsidies were made more generous in 2004, the rush to build wind farms clogged the production lines that saw wind turbine prices spiked to $2,400/kW in 2010 before settling at $1,500/kW in 2015.

Rapid declines in renewables’ costs impact producers’ revenues, where exponential volume expansion is subdued by accelerated price declines. In effect, innovations that lead to rapid costs decline may be curtailed when subsidies buffer the need for aggressive costs competition.

Project proponents act as mechanisms to channel subsidies from the state to producers. A quick mental calculation would convince proponents that the cost of postponing investments has its value.

If it becomes certain that tomorrow’s equipment costs would be substantially lower, and the technological cycle is shortened significantly, the cost of waiting in terms of foregone revenues could be lower than the equipment costs savings.

This is where PV Solar’s fate is sealed. Unlike hydro or geothermal power’s utilization rate of up to 95 percent, PV Solar at best is 22 percent. The foregone revenues are a fifth of those lost from alternative technologies. Worse, after five years of operation, PV Solar’s utilization rates could fall to 12 percent to 15 percent. This comparison makes developers more inclined to wait rather than to rush in to invest—unless of course the subsidies are generous.

What happened to the early movers—an advantage that strategy would suggest they reap the benefits for being decisive? Ironically, as future equipment costs fall farther, the early movers are stuck with obsolescing assets that are stranded as they lose competitiveness. Worse, their valor and decisiveness to be the first to invest leaves them to do the heavy lifting to lower costs that ultimately benefit the latecomers to profit from their labor.

Simple arithmetic tells us that for as long as revenues falls lag the rate of costs reductions, firms could expand cash operating margins. Solar equipment and panel producers are trapped in vicious cycles.

To remain competitive, they continually innovate that costs money while reducing costs (and prices). Competitors push the technology frontier that renders obsolete any incumbents’ offerings. As competition intensifies, rising costs and falling revenues or market shares could only lead to bankruptcies.

Within the PV Solar waiting game, in bypassing one generation of technology, and wait the more cost effective innovation, the shorter waiting period could prove lucrative for developers. However, for PV Solar producers, the waiting game could only exacerbate the pressure on operating margins.

In my academic sojourn, what was presented as simple and readily understood formulation for calculating the “correct” subsidies turns out to be nuanced and complex. Under dynamic markets, where energy prices vary daily, fixing the subsidies becomes an indeterminate exercise. There are many possible answers for a given time that does not hold true once the prices change.

When PV Solar rely on up to 67 percent of revenues from subsidies, the state becomes a counter-party that is critical to sustaining the firm’s financial viability.

Contrary to popular belief, subsidies are far from a source of secure income. As governments renege, subsidies (or its loss) become a major credit risk.

We may take William “Bill” Gates’ advice to heart: “Distinguishing a real solution from a false one is actually very complicated.” Understanding how business work, and applying the same rigor to renewables and our energy supply portfolios may just lead us to offering a real solution to meeting our future energy needs.