I just rediscovered this image from my old emails a decade ago -- my first article in BusinessWorld. Reposting. 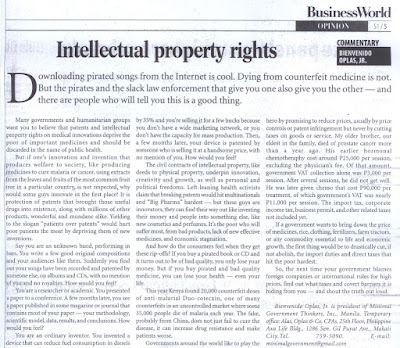 Downloading pirated songs from the internet is cool. Dying from counterfeit medicine is not. But the pirates and the slack law enforcement that give you one also give you the other--and there are people who will tell you this is a good thing.

Many governments and humanitarian groups want you to believe that patents and intellectual property rights on medical innovations deprive the poor of important medicines and should be discarded in the name of public health.

But if one's innovation and invention that produces welfare to society, like producing medicines to cure malaria or cancer, using extracts from the leaves and fruits of the most common fruit tree in a particular country, is not respected, why would some guys innovate in the first place? It is protection of patents that brought those useful drugs into existence, along with millions of other products, wonderful and mundane alike: yielding to the slogan "patients over patents" would hurt poor patients the most by depriving them of new inventions.

Say you are an unknown band, performing in bars. You wrote a few good original compositions and your audiences like them. Suddenly your songs have been recorded and patented by someone else, on albums and CDs, with no mention of you and no royalties. How would you feel?

You are a researcher or academic. You presented a paper to a conference. A few months later, you see a paper published in some magazine or journal that contains most of your paper--your methodology, scientific model, data, results and conclusions. How would you feel?

You are an ordinary inventor. You invented a device that can reduce fuel consumption in diesels by 35% and you're selling it for a few bucks because you don't have a wide marketing network, or you don't have the capacity for mass production. Then, a few months later, your device is patented by someone who is selling it a handsome price, with no mention of you.. How would you feel?

The civil contracts of intellectual property, like deeds to physical property, underpin innovation, creativity and growth, as well as personal and political freedoms. Left-leaning health activists claim that breaking patents would hit multinationals and "Big Pharma" hardest--but these guys are innovators, they can find their way out like investing their money and people into something else, like new cosmetics and perfumes. It's the poor who will suffer most, from bad products, lack of new effective medicines, and economic stagnation.

And how do the consumers feel when they get these rip-offs? If you buy a pirated book or CD and it turns out to be of bad quality, you only lose your money. But if you buy pirated and bad quality medicine, you can lose your health--even your life.

This year Kenya found 20,000 counterfeit doses of anti-malarial Duo-cotecxin, one of many counterfeits in an uncontrolled market where some 35,000 people die of malaria each year. The fake, probably from China, does not just fail to cure the disease, it can increase drug resistance and make patients worse.

Governments around the world like to play the hero by promising to reduce prices, usually by price controls or patent infringement but never by cutting taxes on goods or service. My older brother, our eldest in the family, died of prostate cancer more than a year ago. His earlier hormonal chemo-theraphy cost around P25,000 per session excluding the physician's fee. Of that amount, government VAT collection alone was P3,000 per session. After several sessions, he did not get well. He was later given chemo that cost P90,000 per treatment, of which government's VAT was nearly P11,000 per session. The import tax, corporate income tax, business permit and other related taxes not included yet.

If a government wants to bring down the price of medicines, rice, clothing, fertilizers, farm tractors, or any commodity essential to life and economic growth, the first thing would be to drastically cut, if not abolish, the import duties and direct taxes that hit the poor hardest.

So the next time your government blames foreign companies or international rules for high prices, find out what taxes and covert barriers it is hiding from you--and shout the truth out loud.
Posted by Bienvenido Oplas Jr at 3:14 AM