Protection of private property rights — including physical and intellectual — is an important cornerstone of a free society. People can exclusively use, keep, sell, donate or give away their property if they want to.

There is a measurement of property rights protection worldwide being done annually by the Property Rights Alliance (PRA), a Washington DC-based think tank. It produces the annual International Property Rights Index report and partners with independent, nongovernment, and market-oriented think tanks and institutes from many countries. IPRI covers three major areas: (1) Legal and Political Environment, (2) Physical Property Rights (PPR), and (3) Intellectual Property Rights (IPR) that include protection of patents, trademarks and brands, copyrights and trade secrets.

In the IPR of several ASEAN countries, the gap is not very wide between say, Singapore and the Philippines or Indonesia (see table). 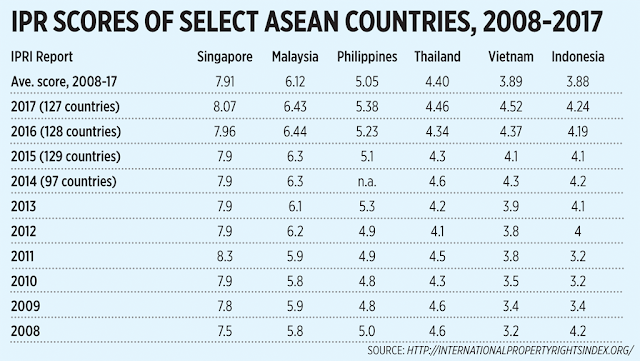 Currently, there are IPR issues that are intertwined with taxation issues of some “sin products” like tobacco and alcohol.

In the Philippines, the sin tax law of 2012 or RA 10351 is turning five years old next month. The law has dual purposes of (a) reducing smoking and drinking incidence in the country by raising tobacco and alcohol taxes, and (b) raising more government revenues.

So far, both have been achieved but there are moves and legislative bills to further raise tobacco tax to twice or thrice their current rates.

In December 2012, Australia introduced a variant of this law aimed to further discourage smoking. Its plain packaging law required tobacco companies to remove the brand, trademark, and logos of its tobacco products and replace them with plain packs with graphic warnings.

Since some smokers may be unable to distinguish good brands from new and/or inferior brands, they are supposedly discouraged from stop smoking.

While the goal is good — to protect public health — the means and the policy leaves much to be desired.

Since it is assumed that consumers can no longer distinguish good brands from inferior ones, brand competition is precluded.

As a result, companies will now be forced to compete on the basis of prices alone, allowing players with poor but cheap products to gain advantage and attract more customers.

Which may then defeat the purpose of anti-tobacco initiatives because this may yet increase the incident of smoking.

Five years after introducing its plain packaging scheme, has Australia been able to meet its goal?

So the plain packaging scheme is a failure in Australia.

Moreover, the plain packaging law has unwittingly succeeded in raising the consumption of illegal tobacco, estimated at 13.9% of total consumption in 2016. This results in an estimated excise tax loss of A$1.6 billion for the government last year.

Furthermore, Australia is also facing a dispute resolution panel at the WTO for implementing the law that disrespects IPR laws on trademark and branding.

France and the UK have also introduced the plain packaging scheme in recent years. One unintended result in France is the rise in illicit tobacco coming from some terrorist groups and criminal syndicates while the French government suffered an excise tax loss of approximately €2 billion in 2016. This illicit trade was linked to jihadists traveling to Syria and Iraq and terrorist attacks in France. Counterfeit cigarettes are also among the most investigated IP-crime in the UK and are linked directly to criminal organizations.

In Asia, there are plans to introduce plain packaging legislation in Singapore, Malaysia, Taiwan, Sri Lanka, and Nepal.

This may a dangerous precedent.

Soon, other “sin products” will be targeted — alcohol, sugary drinks and beverages, fatty foods, even toys.

I am a non-smoker and have never been a fan of smoking. I am just a fan of individual liberty and people having the freedom what to do with their own body and life, also a fan of the rule of law and people’s right to private property.

The plain packaging scheme is dangerous because (a) it disrespects private property rights and IPR laws, (b) encourages the production of illicit items from illicit and possibly criminal players who can easily play with price competition, (c) it encourages more consumption because very cheap products with no brands are more easily available, and (d) it reduces government potential excise tax revenues, which might result in creating new taxes elsewhere.
--------------